On the day in which 22 million Spaniards entered into phase 2 of the de-escalation and the same number move, for the first time, into phase 1, the Ministry of Health has reported that there have been just 132 new coronavirus infections in the last 24 hours, the majority distributed between Catalonia (89) and the Community of Madrid (18) the lowest figure of the entire period of the state of alarm and also since last March 4, when 89 were counted.

However, it is also striking that the total number of deaths has been reduced by almost 2,000 victims compared to yesterday’s number, going from 28,752 to 26,837 from the disease.

The report justifies the reduction of the data to “the transition to the new surveillance strategy” and alleges that it “could continue to happen for several days”.

During the same press conference, Fernando Simón also announced a further 50 new deaths by Covid-19 in the last 24 hours, a figure similar to the trend we have been seeing for the last week.

The deaths are distributed as follows: one in Andalusia, one in Aragon, seven in the Balearic Islands, one in Cantabria, two in Castilla-La Mancha, five in Castilla y León, three in Catalonia, two in Ceuta, six in the Valencian Community, nine in Galicia, three in Madrid, one in the Basque Country and nine in La Rioja. 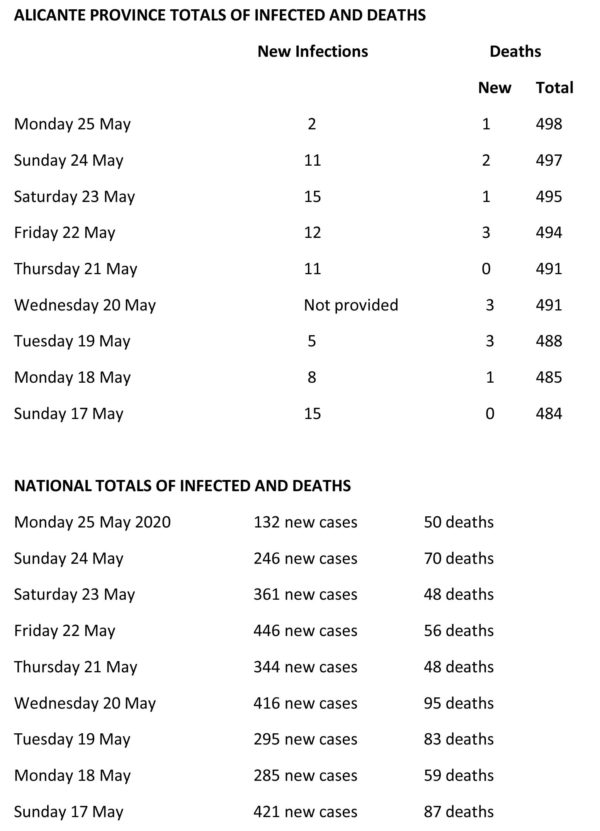 The Valencian Community has reduced the number of new infections to levels seen during the first week of March. According to data provided by Health this Monday, in the last 24 hours only 7 new cases have been registered and one person has died from the virus.

After the 22 new cases on Sunday this new data invites optimism, and the number of discharges also continues its upward trend, already exceeding 11,000 since the start of the pandemic. Since yesterday, a further 144 patients have been discharged.

According to the data provided by Health, this Monday saw 7 new infections distributed as follows by province: 2 in Castellón, 2 in Alicante and 3 in Valencia. The total number of registered positives is 11,080 people.

The situation in Community nursing homes, there are still cases in 78 centres, and two people have tested positive since the last update.