Alicante Gastronomic Solidarity has launched its second logistics centre in the CdT Torrevieja, facilities that add to those in Alicante where it opened its kitchens just over a week ago and is currently serving in the region of 900 people a day.

The local chefs Aurora Torres de La Herradura and Moisés Martínez del Buey are running the kitchen in Torrevieja which, already, is providing meals to approximately 300 people a day.

The groups that are using the Torrevieja facility are the Spanish Red Cross, the organization Alimentos Solidarios and Cáritas San Pedro. In addition, volunteers from Civil Protection and the Orihuela City Council have delivered food to the Casa de la Caridad.

The President of Alicante Gastronómica, Carlos Baño, said that he wanted to highlight the public-private collaboration in this initiative, which is promoted by the Alicante Provincial Council, the Chamber of Commerce, Valencian Community Tourism and IFA. 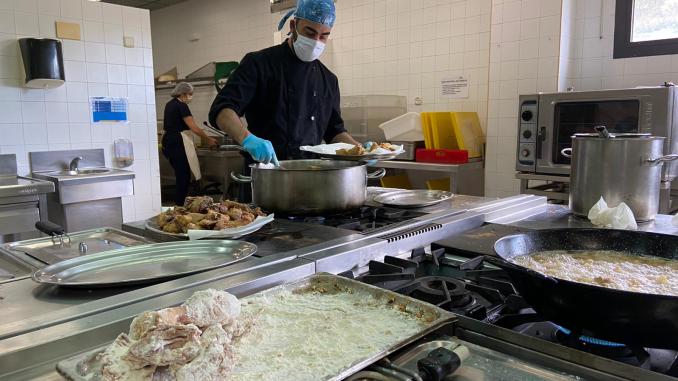 “Our strength comes from being able to use magnificent public facilities, such as the CdT in both Alicante and Torrevieja, and the combined efforts of over a hundred long companies and professionals from the gastronomic sector, who are putting their resources at our disposal”.

He also recognised the collaboration of the Torrevieja City Council through its mayor, Eduardo Dolón, as well as Terrapilar and Carrefour “who have provided much of the equipment necessary to equip the kitchen.”

Baño went on to thank the numerous examples of solidarity that they are receiving from acoss the Vega Baja region. “We have received food from companies such as Pescados Albaladejo, Cárnicas Ríos, Rotary Club and Congelados Córcoles, who have lent us their refrigerated truck.”