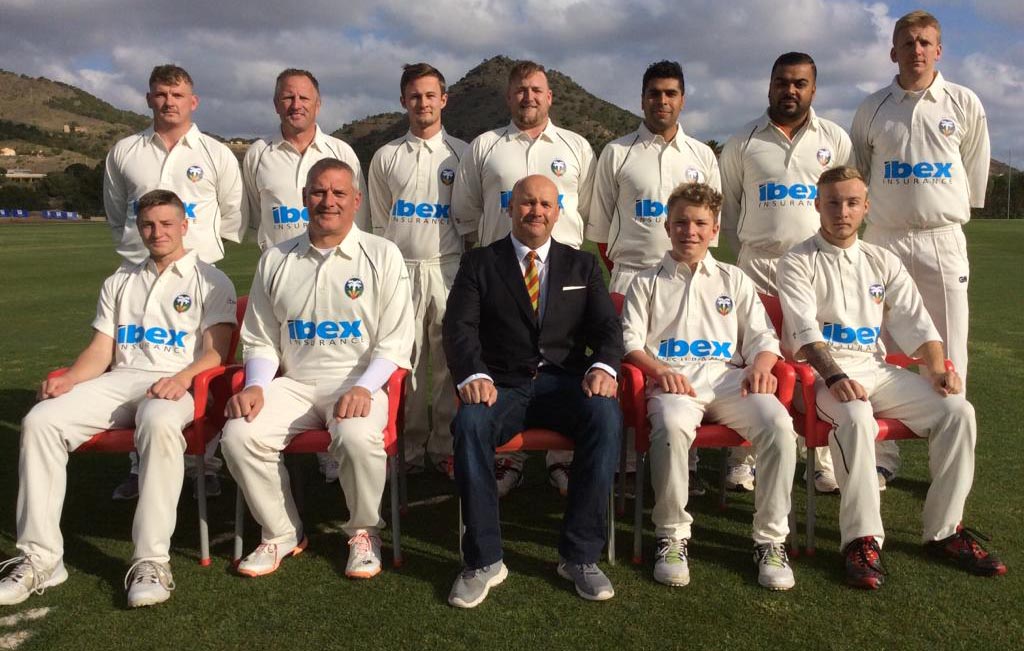 LaMangaTorre CC defeated a touring side from Glasgow Academy by 48 runs in a 20 overs friendly match at La Manga Resort on Saturday.

“With most of the team getting their first crack on a grass wicket a lot of learning was being taken into account, with batting conditions in our favour,” LaMangaTorre CC captain Kieran Wood told me.

LaMangaTorre CC openers T.Knowles and J.Kinsella took the attack to the bowlers with a few swings and misses – but the runs began to flow as boundaries came regulary – leading to an opening partnership of 47, before Kinsella was caught for 24.

Wood, in at No. 3 was looking to find some form and helped tick the score over with Knowles.

The new partnership lasted 4 overs for 28 runs before Knowles was seen outside his crease, with the Glasgow wicketkeeper taking the bails off, before he could get his bat back down.

At 74-2 in the 11th over Wood and P. Harvey, in the second half of the innings, needed to dig in and push the runs. In the 14th over Wood fell for 15, hitting the ball into the wind to fall to mid-off.

With five overs remaining – a score of 99 on the board – P. Harvey and No.5 Parwitter Singh gave chase and had a go at the ball, with nice shots, that lead to the score escalating quickly to 126 in the 18th over.

The pressure of 3 dot balls in a row saw a cut shot called for a run, which lead to a run out for the off-strike batsman, and Harvey leaving the field after a nicely earned 20.

Two balls into the last over saw Singh hit the ball cleanly to mid-wicket, with No.6 batsman C.Rumi running half way down the wicket, to find Singh standing still. Rumi jogged back to the crease – only to find the bails taken off.

The final three balls saw LaMangaTorre CC chalk up four runs to take their final score to 134-5 from the allotted 20 overs: “It was a nice performance with the bat from the boys,” captain Kieran Wood to The Leader.

LaMangaTorre CC opened their bowling with the youngsters of the team with the attack lead by C.Rumi from the first over, followed by Connor Wood at the second over.

After an expensive first over going for 8 LaMangaTorre CC quickly recovered, when Wood took a wicket maiden, and a nice catch from P. Singh.

Pressure was applied by LaMangaTorre CC and runs dried up from Glasgow, prior to good shots leading to a boundary every other over from the visiting side. A bowling change saw S.Khan turn his arm over with D. Scott attacking from the other end.

Khan kept the runs to a minimum, bowling three overs for 9 runs, whilst D. Scott claimed a wicket with a fine catch by P. Fletcher, at square leg.

Scott bowled a few loose deliveries, and the next bowling change of P. Fletcher and P. Singh saw some loose deliveries – aided with some great balls bowled – each bowler claiming a wicket.

The final few overs, bowled by H. James and J. Kinsella, saw the 20th over completed and Glasgow ending their innings on 86-4.

“It was a comfortable win by 48 runs at the end of the 20 overs. A confidence booster for the team before the T20 tournament getting underway in April,” said LaMangaTorre CC captain Wood.

*The Leader sports reporter Andrew Atkinson spoke to the Glasgow Academy touring camp at La Manga Resort and will bring an Exclusive interview and photos to the wicket next week. ONLY IN THE LEADER.