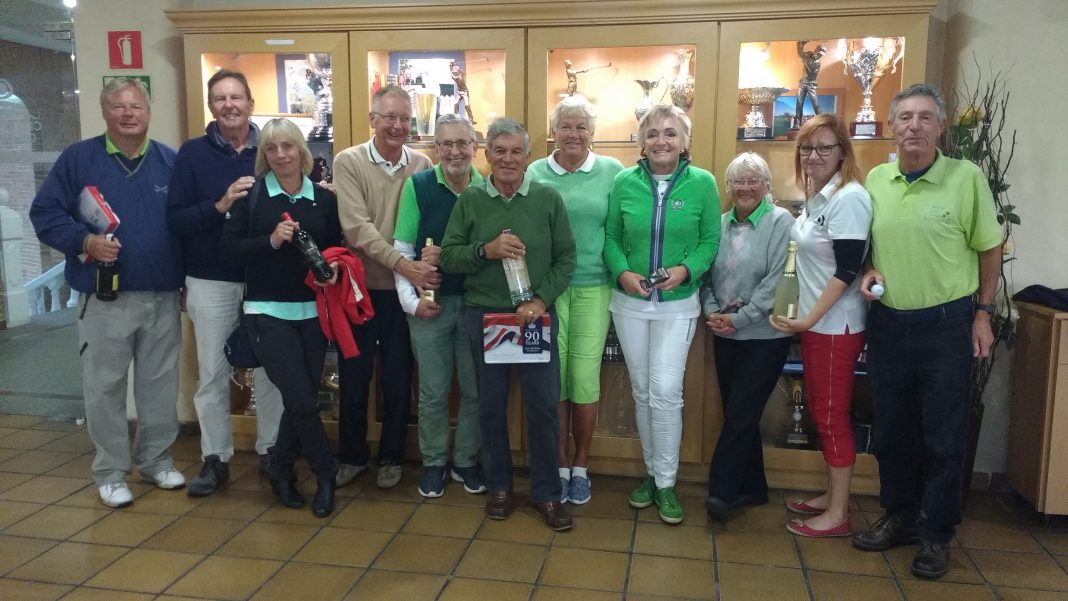 On 28th April Montgo Golf Society  played a Betterball Pairs Stableford  competition sponsored by Celia Cronin. We were delighted to have a great days golf as the previous days rain threatened to scupper our plans.  Not only was the course surprisingly dry (ish) with only one or two temporary ponds, buggys were permitted in the rough to the relief of several of our members. Atestament to the great work Oliva have done in recent years to improve drainage.  Consequently we had a full house of all those who had booked in.

The day went well with only a light shower forcing us to don our brollies and wet weather gear for the final six or seven holes.

Leading the field our winners were Roy Jones and Mike Oxley with a score of 38 off of 90% of their combined handicaps.  Ros Fletcher and Patrick Lynch just missed out as they too had a score of 38 but were squeezed into second position on countback by just one point.  A close run thing indeed.  Third place was an all lady pairing of Christiane Gruboeck and Glenys Cuming with 37 points.

There was relief all round as last weeks winners, Denise cooper and Gordon Gleeson, were paired together again this week but failed to reach their former standard.  However Ms Cooper did manage to take both nearest the pins on the 3rd and 16th holes.  Not wanting to be too unpopular one prize was reissued following a card draw ( and I hate to mention her card was also drawn for this!) the delighted winner was Arthur Burrows.

The mens NTPs were won by Derek Hall on the the 3rd and by Richard Morris on the 16th.  Derek also won himself a coveted Montgo ball by sinking his putt.  A feat duplicated by Gordon Gleeson who also took away a coveted ball.