Local councils are required to provide information to the Department of Tourism so as to enable the evaluation of local beaches for the annual quality awards. In the case of Orihuela the study, carried out by local marketing organisation Cuma, seems to have been based on questions put to just 1500 people, both residents and visitors, between 16 June and 30 September last year.

The sample would seem to be rather small but a spokesperson for the council said that it was about the usual number if not a slight increase on similar surveys carried out in previous years.

Nevertheless, according the new councillor for beaches, Luisa Boné, the important factor is the 6 point increase in the level of general satisfaction that seems to have been enjoyed by those who were questioned showing global satisfaction of very nearly 80%..

Following the dip experienced in 2014 when the level fell to 73.44%, almost 4 people in every 5 gave Orihuela Costa beaches a ‘thumbs up’ in 2016 which saw the level increase to 79.61%. Some of course were deemed to have provided rather more satisfaction than others with Cala Bosque, Cala Capitan, Aguamarina Beach and Cala Mosca all showing improvements on the previous year.

“Not only does the report tell what the people like about our 11 beaches” said Ms Boné, “it also shows us where we are going wrong and where we can make improvements in the future.”

Maintenance and cleaning showed a satisfaction level of 84.07% while first aid and police surveillance featured high at 93.62% but there were complaints about the build-up and removal of algae, the inadequate walkways on all beaches and the poor accessibility at Cala Mosca.

Low water pressure in the footbaths was another cause for concern as was the lack of footbaths, the lack of toilets and in one case the lack of activities and of suitable refreshment facilities on the beach.

“And it is in these areas where we will be paying special attention” said Boné “as we continue working to maintain and improve the satisfaction of our eleven beaches for all users, whether tourists or residents, during 2017.” 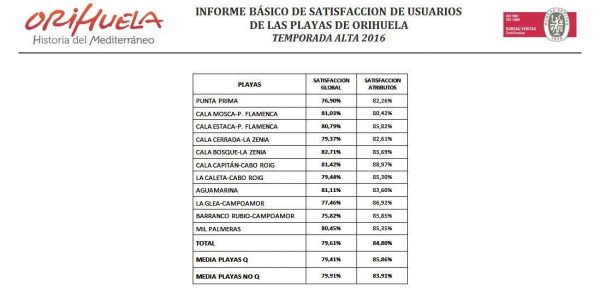 In January 2016, local pressure group FAOC handed over to the then Coastal Coordinator, Sofía Álvarez, their own proposal for Orihuela’ s beaches, which contained an Integral Plan showing outstanding necessary actions, contemplating their gradual implementation before last summer.

With few of the recommendations actioned the report was again presented in September 2016, together with a Financial Proposal for the 2017 budget, highlighting once again the deficiencies previously listed by the survey of beach users.

There is no doubt that the Orihuela Costa can boast some of the best beaches in Spain. Year after year they are awarded with “Q for Quality” flags, which are internationally recognised as the highest award which can be given to beaches, but there is little doubt also that the authorities are resting on their laurels and failing to make the necessary improvements that will enable the beaches to continue to be among the best in the world.

The solution, of course, is to dedicate the necessary investment to the beaches of Orihuela Costa in accordance with the needs and priorities that exist but with local tourism put under pressure with the exchange rate gradually dropping off and the uncertainty posed following the BREXIT vote, if tourists are to be attracted in the necessary numbers, that investment needs to be found now to ensure the continued popularity and attraction of the Costa’s beaches.