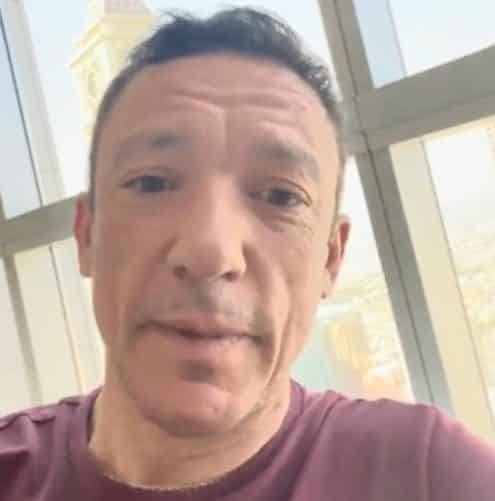 Frankie Dettori has announced he has tested positive for Covid-19 that lead to the Italian born jockey missing rides at Meydan, Dubai, on January 28, including the Saeed bin Suroor-trained Real World in the Zabeel Mile.

Father of five Dettori, 51, is confined to isolate and in a video posted on Twitter, he said: “I won’t be riding this weekend, as I’ve tested positive for Covid.

“I’m restricted in my room for a few days. I’m feeling a bit under the weather, but I’ve had my vaccine so we should survive.

I’ll keep you posted, but I’m not going to be doing much anyway.”

Dettori, MBE, has been Champion Flat Jockey three times and has ridden the winners of more than 500 Group races, with highlights including 20 winners of the English classics.

Dettori, who rode all seven winners on British Champions’ Day at Ascot in 1996, is the son of the Sardinian jockey Gianfranco Dettori, a prolific winner in Italy.

Dettori, described by veteran Lester Piggott as the best jockey currently riding, has been operating as a freelance, having split with Godolphin Racing in 2012, whom he was stable jockey and had most of his big race victories.

On 5 December 2012, he was suspended from riding for six months after being found guilty of taking a prohibited substance, believed to be cocaine.

Dettori, who lives in Stetchworth near Newmarket, Suffolk, is married to Catherine, having five children, Leo, Ella, Mia, Tallula and Rocco.

In 2000, Dettori and Ray Cochrane were aboard a Piper Seneca plane which crashed on take off at Newmarket on its way to Goodwood in Sussex, killing pilot Patrick Mackey.

Dettori escaped with a fractured right ankle and an injured thumb and spent weeks in Addenbrooke’s Hospital recovering.