Although the British Government reach a Brexit agreement with the EU just prior to the end of the year, the politicians responsible would now seem to have washed their hands of many of the problems that the agreement has introduced.

Increased paperwork and trade delays are causing problems for retailers that stock European products as well as producers that export their goods overseas, with the red tape damaging for both importers and exporters, even putting some business at risk.

The government has set up a new dedicated team to work with the food industry on how to streamline the movement of goods, but to date it would appear to have yielded few results.

Of course it is not only the import of goods to supermarkets in the UK that are suffering from the fallout of the Brexit deal but many Supermarkets and Independent businesses here in Spain have also been faced with supply problems, because of post-Brexit rules on exports into the EU.

Fresh produce at 20 Marks and Spencer stores in France, Morrison’s in Gibraltar, and a chain of UK supermarkets in Belgium is reportedly on the verge of closure – with no deliveries since December. Indeed one Marks & Spencer store in Paris has now shut its doors after experiencing weeks of food shortages and delays of fresh food imports from the UK.

Overseas Supermarkets in the area have also had issues, with deliveries caught up by the new EU regulations, with one employee saying they had ‘no idea where their delivery was’ after vegetables were delayed in January.

That is still very much the case, with no immediate forecast of things getting back to normal any time soon, although the company has recently turned to Irish supermarket chain SuperValu to help fill the growing number of gaps on their shelves and in their deep freeze cabinets. 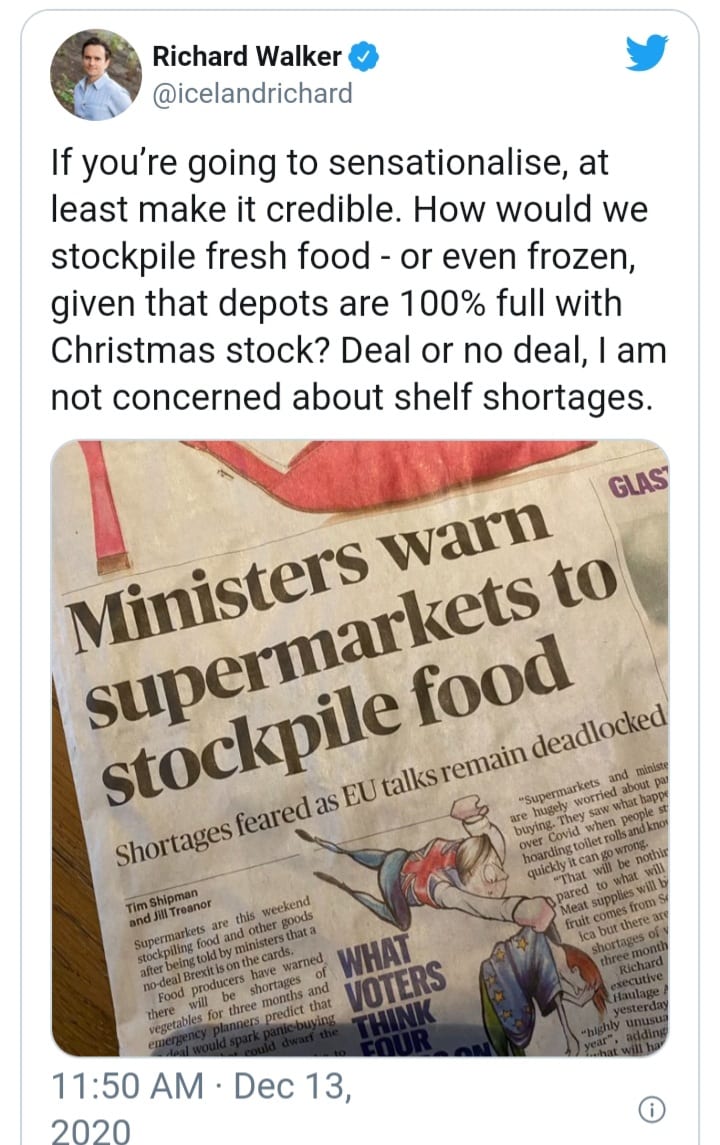 Deeside based Iceland MD Richard Walker said, pre-Brexit, he was not concerned about food shortages on shelves after January 1 – whether or not a Brexit ‘deal’ was secured.

After Ministers had warned supermarkets not to stockpile, Mr Walker wrote on Twitter: “How would we stockpile fresh food – or even frozen, given that depots are 100% full with Christmas stock? Deal or no deal, I am not concerned about shelf shortages.”

Comments from Mr Walker, who reportedly voted to leave the European Union, came as the BRC also sought to reassure shoppers there was no need to panic buy – in the event of ‘no-deal’ as negotiations between the UK and the EU continued, pre-Brexit.

BRC CEO Helen Dickinson had said retailers were preparing for all outcomes and stockpiling extra products, including toilet rolls, tinned foods and other longer life items, to ensure continued supply of essentials.

Some businesses in Spain were also caught up in the new customs and VAT process since leaving the EU, with The Little Painter in Los Montesinos alarmed at the additional VAT (IVA) costs incurred, in importing stock to Spain, as previously reported by The Leader.

“Retailers have also been building new customs and VAT processes, working with suppliers to ease logistics, and more,” said BRC CEO Helen Dickinson, ahead of the pre-Brexit ‘deal’.

Aldi in Quesada had their shelves full, with no issues during a visit by The Leader on February 9.

Another store that anticipated the problem was the International supermarket in La Marina which stocked its shelves and its warehouse prior to Christmas, however that too now has one eye on its suppliers, none of whom have had any deliveries this year, with some beginning to run out of many popular items.

Exporters are being overwhelmed by the amount of paperwork needed to bring products through customs in France.

They say it is taking UK suppliers 3 weeks to prepare the paperwork for shipment alone, and that a separate form has to be completed for each individual item. With some consignments moving hundreds of items at a time in a single lorry, this is a long, drawn out and expensive process.

If just one form is completed incorrectly this will then delay the whole shipment, which attracts additional costs in manpower and transport, as a result of which supermarkets do not know the cost of their produce until it arrives at the door.

With UK exporters now facing significant additional costs and paperwork, many are rethinking their post-Brexit strategy and analysing whether it is viable to supply European markets. Some have already decided to stop exporting to Europe which will mean that our favourite British foodstuffs may be even harder to source.

Those that do carry on are unlikely to absorb extra costs which inevitably means price rises for the consumer.

Post Brexit bureaucracy mean that many stores and supermarkets supplying British foodstuffs find that their supplies are in a pretty sorry state, without a single delivery of food from the UK in almost 6 weeks, so if your taste for UK products includes custard creams, shortbread, pilgrims cheese, corned beef, proper bacon or British bangers, those days could soon be over, if not you can be absolutely sure that they will certainly come at a premium.