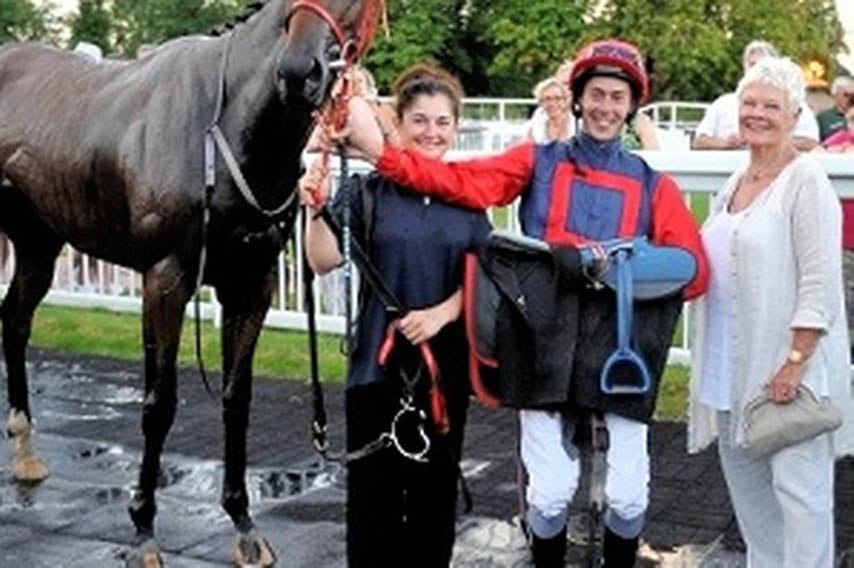 “I used to ride a lot – I’ve always had a huge love for racing,” said Oscar-winning actress Dame Judi.

Owned by The Stewart Family and Dame Judi, As De Mee, trained  by Paul Nicholls, finished third of five runners in January at Wincanton, when a beaten favourite.

As De Mee raced at Aintree in December, when running sixth of 18 over 3m 2f, prior to an outing at  Cheltenham in November over 3m.

As De Mee had a race to forget in the Randox Health Becher Handicap Chase at Aintree in 2017 over 3m 2f, when blundering and unseating jockey Sean Bowen at the tenth.

Better memories are when winning a Handicap Chase at the Aintree Festival in 2016, when jumping soundly under Bowen.

Dame Judi, who portrayed “M” in James Bond, previously owned horses, Zenarinda, Peeps, and Smokey Oakey, a G3 winner, prior to buying a share in As De Mee.

Upon retirement Smokey Oakey, who won seven from 55 races, retired to Surrey and was ridden by children and young adults with mental and physical disabilities at Riding for the Disabled, a charity of which Dame Judi is Patron.

Dame Judi is also the Principal Patron of the British Thoroughbred Retraining Centre, an organisation that re-homes ex-racehorses.

Dame Judi bought a share in Smokey Oakey, who had been purchased as a yearling for 9,000gns, with her chauffeur Bryan Agar.

Trainer Tompkins said: “It was through Bryan that I met Dame Judi, and from going to see her at the Chichester Festival, she said she’d like a horse.

“Dame Judi is a real enthusiast. She takes a great interest.”

Dame Judi purchased a share in As De Mee, after having lunch with owner, Andy Stewart, who won a lunch date with her – after a winning bid at a Charity auction!

As De Mee has also won in France, and trainer Nicholls said: “I like As De Mee, who had some good form in France.

“It was a pity we missed the Aintree Grand National in 2018, due to a leg injury, it being Dame Judi’s first horse with us.”

Racing enthusiast Dame Judi, who had a French sister-in-law, whose family had a racing stable in Chantilly, recalled: “I went over to France with my family.

“There was a horse – named after my cat – and it came in (won). I’ve never quite known what it won, because I was quite little.”

Dame Judi quipped: “It probably paid for our holiday!”.