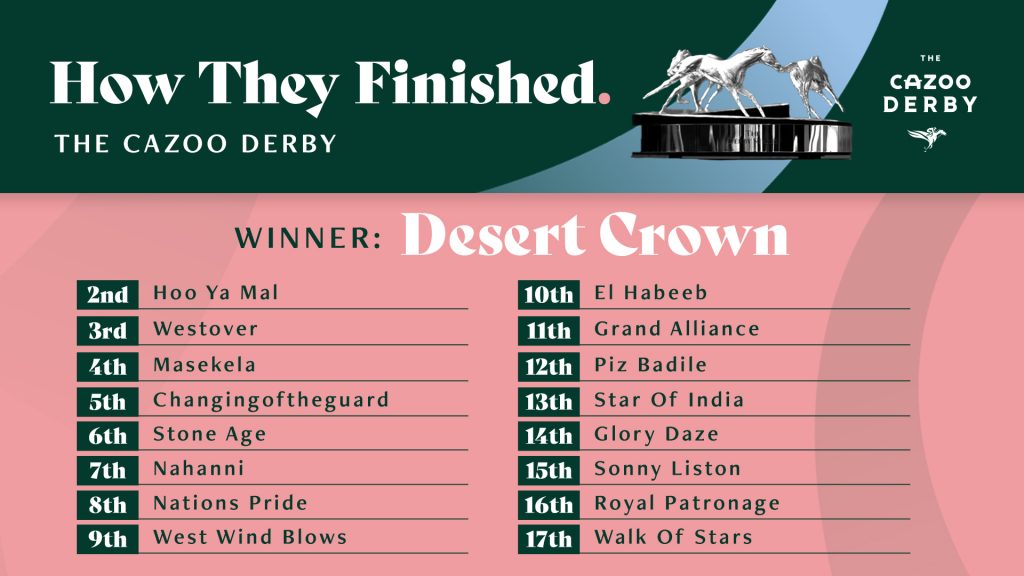 “We were very hopeful after York that he might win the Derby. But, you know, the performance delighted me because he had won a long way out. He’s got such a good mind,” said Stoute after his sixth victory in the 1m 4f Classic.

“I was very happy with where he was positioned, when he got to the top of the hill. He’s a good athlete and he floated down the hill.

“It’s a wonderful thrill. They all are – it’s just a delight to train good horses and fortunately we’ve came across another good one,” said Stoute.

Veteran trainer Stoute added: “At an early stage he was having little niggles – that’s why he didn’t run until the back-end last year. It was nothing serious, but he was maturing and developing.”

Desert Crown led going strongly 2 furlongs out, and Kingscote said: “People think you have to do something spectacular but, I think at the end of the day the horse does most of the work – I’m just fortunate enough to be sat aboard him.

“It took a lot of guts from Sir Michael and the owner to stick with me, in a Derby, so I’m very grateful to them for supporting me and letting me ride a very good horse.

“I’m not a champion jockey. I’m not Ryan Moore. I’ve had a good career – but I’ve not had a starlit career. I think it takes a lot for them to not look elsewhere.

“Desert Crown was a bit more push button today, than he was in the Dante. He was more alert through the race. Everything I asked of him I got straight away.

“At York (Dante in May), it just took me a little while to wind him up. Today he was much more alert. He does have gears.

“Every time I’ve sat on him he’s been very calm and today was no exception. I couldn’t fault him at all.

“He went to the start and the fireworks went off, but he was fine. He was a lovely ride.

“I got goosebumps pulling up, when you realise, but at the two-pole it was all over.

“I think it’s nice that my kids were able to come. I was a bit nervous about them coming, because it changes my routine, but my wife wanted to be here and I’m glad they all were.”