Just before 2pm on Tuesday afternoon,  two bright lights appeared in the overcast sky of the Mar Menor, silhouettes of the two Pilatus PC-21s flying in to the General Air Academy where they are replacing the C-101 , after more than 40 years of service training of the pilots in Spain’s Air Force. The two arrivals are the first of the 24 Swiss turboprops that the Ministry of Defense has bought for the San Javier air base, aircraft, it is said, that will revolutionize the teaching of flight.

Known by the military as the ECO 27, the teaching staff and the maintenance crew say that it will mean a giant forward leap, from dashboards with oscillating clocks to liquid screens, from analogue to digital, but above all “it will save lives”, said one of the senior engineers.

With advanced avionics and the very latest technological training capabilities, both on the ground and in the air, it is “the teaching aircraft of the 21st century” said Commander Marco Delgado, the AGA instructor who arrived in one of the Pilatus that flew into the airbase for the first time. 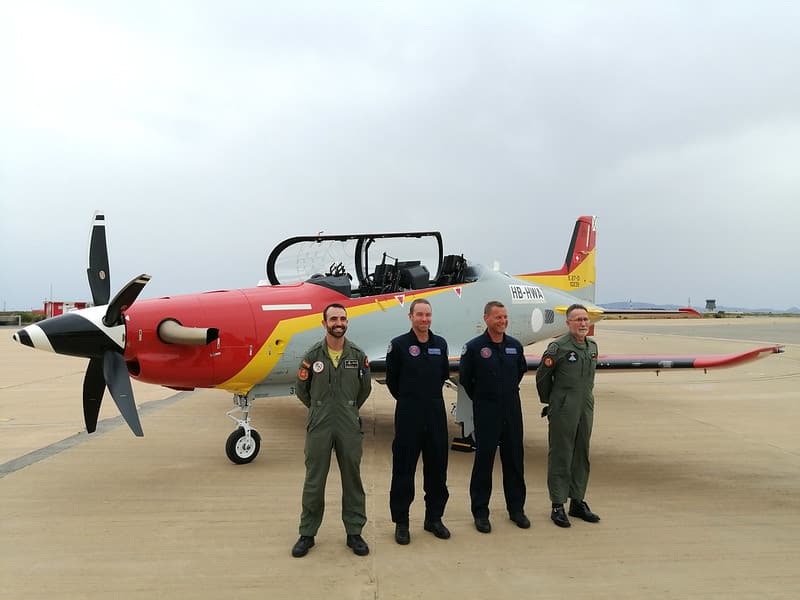 In the front seat of the cabin, he was accompanied by the South African pilot Patrick Willckoc, who is on the staff of the Swiss company.

In the other aircraft -11 metres long and wingspan of 9 metres, the German pilot Mendel Martin, also from the manufacturer, was sharing a cabin with General Luis Antonio Machés Michavila, deputy director general of Programs of the General Directorate of Armament and Material from the Ministry of Defence.

“I wish you a long life, with many takeoffs and landings,” he told AGA Colonel Director Pascual Soria, when he handed over the two new aircraft that will gradually replace the C-101s used by the Eagle Patrol.

The new aircraft has “similar performance”, according to Commander Delgado. It can travel at 700 kilometres per hour at an altitude of 8 kilometres, and with a range of 1,300 kilometres, so it can reach any point on the mainland peninsula without a need to refuel.

“It looks a lot like the C-101, said Delgado. “It is quite lightweight and the sensation of flying is very similar.”