After a weekend of intense activity, with hundreds of people trying to put out the flames, the Bejís fire “evolves favourably”, according to the emergency services. “There are no flames around much of the perimeter although fires can still be seen in ravines that are difficult to access.

During recent nights, 9 units of Forest Firefighters from the Generalitat Valenciana were deployed, 9 fire engines ️, a volunteer brigade from Fuentes de Ayódar, ️8 firefighters from Castellón and ️146 members of the UME. 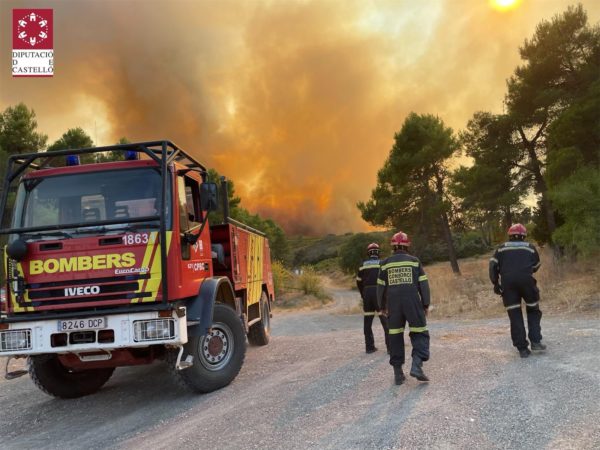 Throughout Friday night the 500 firemen have continued to work, while the 40 air assets rejoined at first light. This enormous human and technical effort is spread over 135 kilometers of perimeter.

The first of the major fires still left to bring under control is near the El Toro military base, where the firefighters concentrated a large part of their efforts overnight.

The second is in Teresa, within an already burned area, which shows what specialists have been saying since day one: the temperature inside the fire is such that significant outbreaks can still occur at any time. 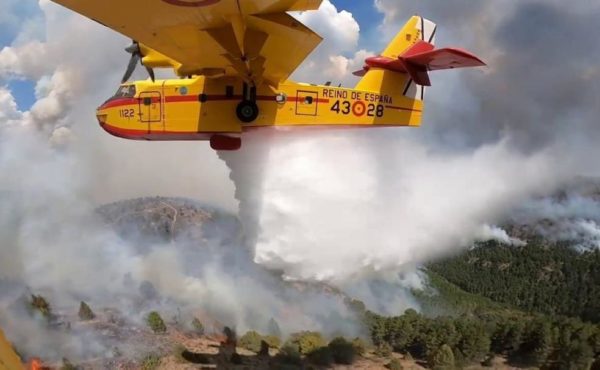 The third is in Andilla, where the fire surrounds the town: on Friday night it was just three kilometers from the town centre. Firefighting was intensified from dawn on Friday: although the early morning humidity helped reduce the intensity of the flames closest to the urban area, but with the arrival of the sun they regained strength.

As the tables begin to turn there is cautious optimism in Viver, where the Advanced Command Post (PMA) is located, and from which the fire extinction work in Bejís is controlled. “The war is long, but the battle is now being won,” said one controller.

Early on Saturday morning, the Olocau fire is under control, but it is still active. During the night, ️2 units of Forest Firefighters, ️2 fire engines, ️1 crew, a coordinator and 3 forestry brigades from the Valencia Provincial Firefighters Consortium tackled the blaze.

The Petrer fire had been extinguished by 07:30 a.m. according to a communication from the Alicante Fire Department to the Generalitat Emergency Coordination Centre. 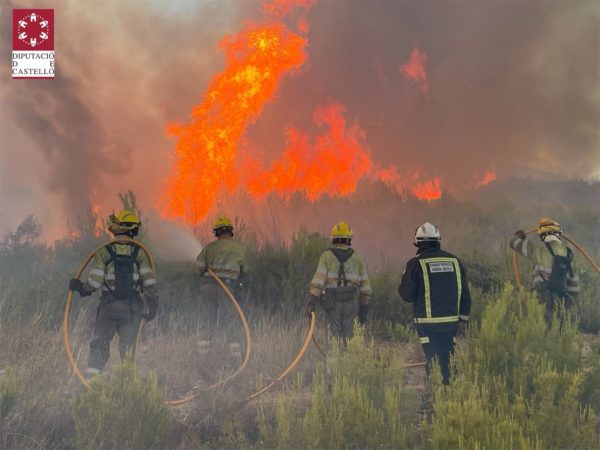 At the Vall d’Ebo fire, the perimeter is now stabilised and the progress is favourable. A thermal camera with a drone unit is being used to monitor the fire. The operational staff is divided into two sectors and there have been no developments overnight where ️2 units of Forest Firefighters of the Generalitat, ️2 fire engines and ️20 fire crews from Alicante were deployed.

But the truth is that, in this matter of fighting fire, nothing is certain. Even President Puig spoke of “trying to consolidate” the day’s work before the increase in temperatures and the arrival of the wind, which, after spending all day blowing from the south could change to the west in the early hours of this Saturday.

“Saturday will be more complicated,” warned the head of the Consell. “This Saturday the wind and the heat will not help, but finally, it seems that we are now over the most decisive hours of the fight against second most serious fire that we have ever seen in the history of the Region.”

You are reminded that the pre-emergency level due to forest fire risk is EXTREME throughout the whole of the Valencian Community. It is forbidden to make any type of fire. If you see fire or smoke, call 112.