Spain will defend their title against the Netherlands and Sweden as they aim to win their 10th European Championship in a row.

Rugby Europe has confirmed the three-match schedule of the Rugby Europe Women’s Championship (REWC), to be played in February 2023 as Netherlands, Spain and Sweden go head-to-head for the title.

For this 2023 competition, the REWC will see a new contender, with Sweden earning promotion after an impressive showing in last year’s Trophy Division. They will take the vacant place of Russia, who are still suspended.

The Baltic team will play against the Netherlands in Amsterdam first before going to Villajoyose to challenge the reigning title-holders Spain in the match that will conclude the tournament.

This tournament kicks off an exciting new era for women’s rugby with the launch of the WXV in 2023, by World Rugby, which aims to revolutionise the women’s international rugby landscape, providing for the first time a meaningful pathway for all unions and a competitive springboard towards an expanded 16-team Rugby World Cup in 2025.

All games will be live-streamed on the platform – www.rugbyeurope.tv and on Florugby in North America. The Villajoyose game will also be shown live by TVE Teledeporte

The Spain vs Sweden match will be played at Villajoyosa Rugby Stadium Saturday 25th February, 5.00 pm. If Spain beats Netherlands the previous week this match will essentially be the final with the trophy presentations after the game

Ticket for the game will cost 10.00 euros for adults. Children Under 14s are free and are available at www.entradium.com. 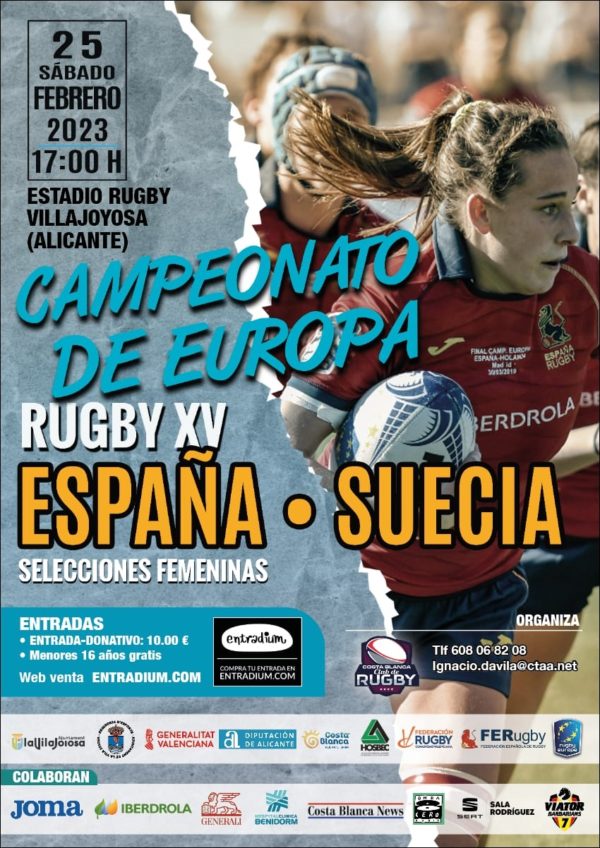