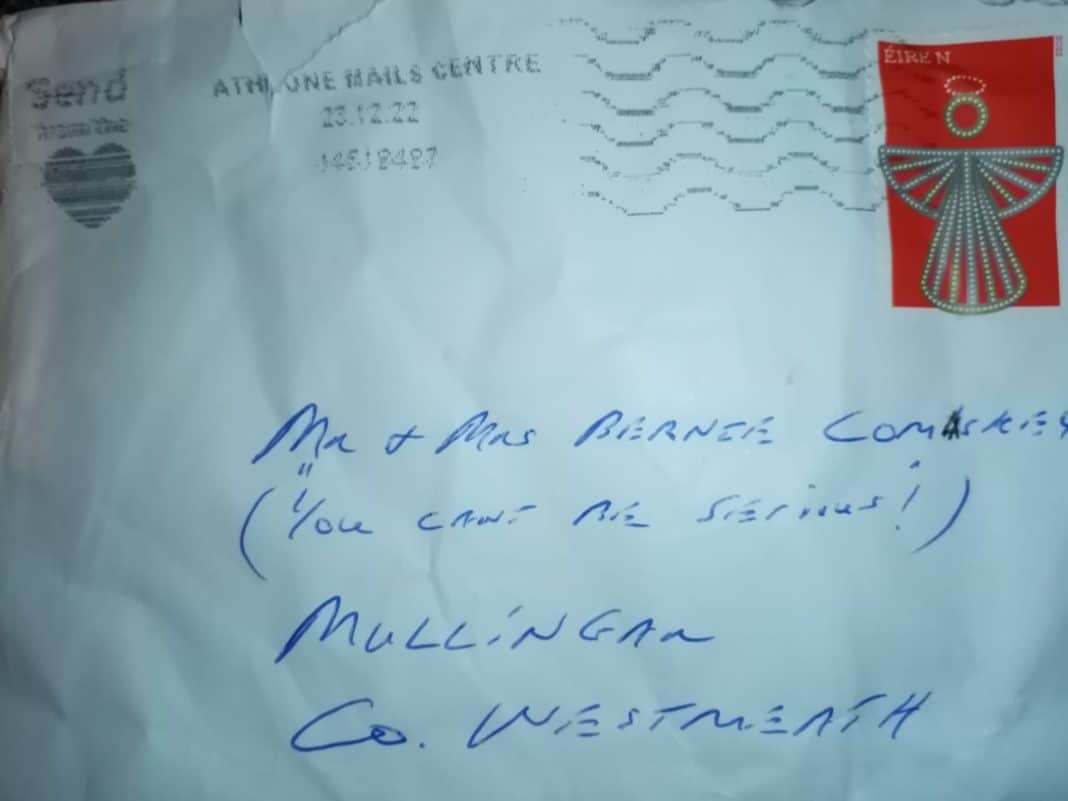 For nigh on two centuries few intuitions have served our country with greater benefits than has our postal service. Emails and texting may have replaced a lot of postage stamps and given us a means of instant communication, but our postman continues to play a vital role in our society and the men and women who deliver our mail continue to be held not only in high esteem, but with great affection as well. This is probably truer in Ireland, where we have had such a long history of emigration and the letter from family member abroad kept the family together. The postman was that link and was regarded as a friend of the family at every doorstep on his round.

The Irish postman develops a unique knack of making sure that every envelope finds its way to the sender’s intended destination. The ‘not known at this address’ or ‘insufficient address’ will only be used when every other avenue has been exhausted. There are countless examples of An Post personnel and their predecessors going the extra mile in order to ensure that a letter reaches its intended target – even in this helter-skelter world of today. We have all heard of the most extraordinary mysteries of how items posted with hardly any address manage to find its way into the right person’s hand. I am about to give you another example of An Post getting it right where you would think it couldn’t be done.

Last week I received a card and letter addressed to me at; ‘YOU CAN’T BE SERIOUS’, MULLINGAR, CO WESTMEATH.’ The card was sent by a man who read some of these columns and wanted me to know how much he enjoys them. It was posted in Castlebar. He didn’t know where I live, but he knew that the articles originate in Mullingar. The envelope arrived in my letter box in Graftonstown, without any ‘try this’, ‘forward’ or even a solitary biro mark added by anybody, Take a bow, An Post!!

My brother, Camillus, lives in Westport where he is known as ‘Cosmo’ – in order to protect his identity, one assumes. A few years ago, Camillus met an English fisherman in McGing’s Bar. They got to talking, as fishermen do and engaged in friendly discourse, accompanied by ‘a sociable few.’ After the tourist returned to the UK, he regretted not having taken my brother’s address so he could meet him again on his next fishing expedition. The Englishman said to his wife; ‘Blimey (or a word to that effect) sure everybody seems to know everybody in Ireland’, and he wrote to Camillus addressed to ‘Cosmo, Westport, Ireland.’ And I know this story is true, because I saw the envelope!

The first postman that I knew and loved was Jack Daly. Impeccably dressed in his pressed uniform and peaked cap, it was he who delivered happiness to our house; my father’s county council cheque, birthday cards with ten shillings for us boys, letters from family at home and abroad – and especially, the odd parcel from England and America. When I was 9 years old, Jack got off his bicycle a mile from our house, sat down on a stone and died. I learned every detail from overhearing my parents and neighbours talking. Devastation … and there was none more devastated than me.

Mick Ivory was Jack’s successor. A rather gruff man, who ‘took a drink’, Mick was no less obliging and there would sometimes be a bottle of stout kept for him in our house. He proved to have a heart of gold as well. When my younger brother was rushed into hospital for an operation, Mick walked in to our house on his round, emptied all the change from his pockets onto the kitchen table saying, ‘buy something for that gosson in hospital’, and walked out.

Joe Masterson was next and yet another friendly, obliging gentleman. I moved away during Joe’s reign and when I returned it was Nicholas Moran who was the bearer of (mostly) good news. Nicholas was yet another incredibly obliging postman – and just generally a lovely guy. Sadly, he too died young. I have no doubt but that all of my past postmen friends are doing their rounds up there in heaven, where they have no pressures of time and can chat with their friends and neighbours all day.

Barry Carr is our current postman. I had a sign on the wall in ‘Paddy’s Point’ (another one I brought from America) which read; ‘We don’t ask our staff to be nice – we hire nice staff.’ Well, An Post must be operating off that same manual, because Barry is the equivalent of all those postal heroes of my youth. Helpful, friendly and ever obliging, Barry carries on that wonderful tradition I associate with the Irish postman. 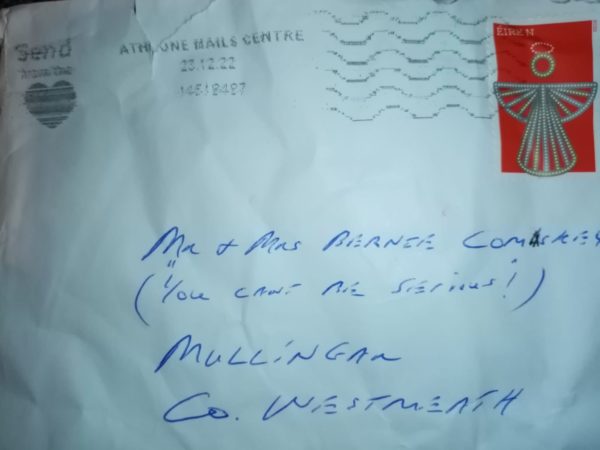