The LeaderPutting YOU at the Heart of the Community
Sign in / Join
Subscribe
Home Spain Community of Andalusia THE MAYOR OF MOJÁCAR ATTENDS THE PRESENTATION OF THE NEW MACENAS MEDITERRANEO... 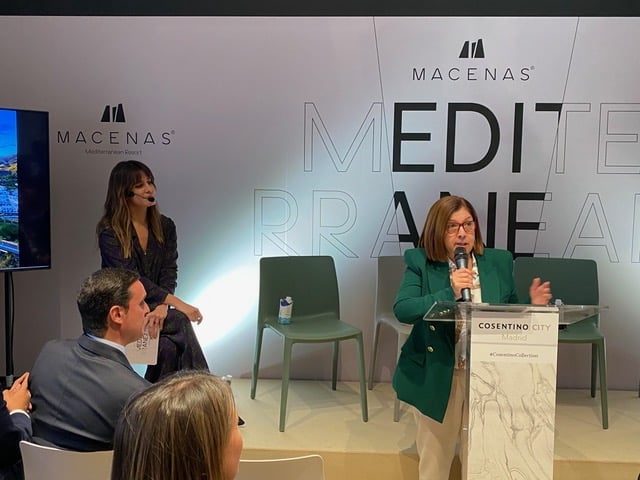 The Mayor of Mojácar, Rosa María Cano, accompanied by the First Deputy Mayor, Francisco García Cerdá, attended in Madrid the presentation of the Macenas Mediterráneo Resort sustainable urban development project which the Cosentino family plans to carry out in Mojácar.

The act, presented by the well-known Almerian journalist Isabel Jiménez, started with the Mojacar Mayor’s speech, in which she expressed her satisfaction about the project and the support of the municipality for the development of this project which respects the history, the surroundings, sustainability and the environment, as well as being a future and quality project under a next-generation, sustainable residential and tourist model.

The Cosentino family plans to recover the Macenas complex located in Mojácar to turn it into a sustainable resort, a national and international benchmark, in which an investment of more than 200 million euros is estimated and the initial creation of 180 direct jobs and 320 indirect.

Of particular note is the construction of its own water purifying plant, as well as the expansion of electricity capacity, in accordance with actions such as those carried out in Fines, Partaloa and Cantoria, the biggest photovoltaic self-consumption industrial facility in Spain.

Another noteworthy investment is a golf course designed by the firm Stirling & Martin, under the management of the specialist architect Marco Martín. An 18-hole golf course which will be a benchmark for environmental practices, given that it will integrate the landscaping using indigenous solutions. It will create a botanical garden along the entire route and will have water-saving systems, automated irrigation networks and 100% recycling of the wastewater for irrigation, regenerating and recovering the native flora and fauna. The maximum occupation is 50% of developable land.

Álvaro de la Haza, director of the Consentino family Family Office and member of the project executive team, together with Antonio Sánchez, head of ‘Macenas Mediterranean Resort’, affirms that “this investment stems from the Consentino family’s commitment to Almería, recovering in a responsible way the natural wealth of Macenas, turning this resort into a first-class tourism and residential option, prioritising the criteria of sustainability, quality of life and well-being before overbuilding,

A long-term plan that will get underway in the coming months with the opening of the social club and the possibility of offering different spaces, of a gastronomic experience of local products, kilometre 0, to open in 2025.

Also at the presentation was the Junta de Andalucía’s Regional Minister for Agriculture, Fishing, Water and Rural Development, Carmen Crespo, and the President of the Almería Provincial Council, Javier A. García.