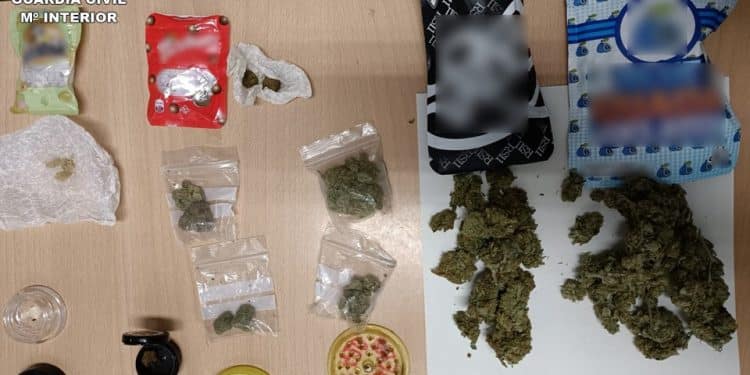 The Guardia Civil arrested a young man suspected of being a drug dealer who was identified and located operating at the gates of a school in Guardamar del Segura.

The arrest occurred earlier this month, during a routine operation within the security plan for monitoring schools, when officers noticed the presence of a young man who came from the bus station and was going to a nearby educational centre.

The man, upon noticing the police presence, tried to avoid the agents by running away, which only increased the suspicion of the officers who promptly ran after him, apprehending him and identifying him.

Once intercepted, the officers were able to prove that he was a 19-year-old Spanish male, a resident of Rojales.

The agents detected a strong smell of marijuana in the young man, so they proceeded to search his belongings, seizing 31.5 grams of marijuana, 1.75 grams of hashish and 0.40 grams of hashish oil, all camouflaged in sweet wrappers and prepared in doses for retail sale, for which he was arrested as the alleged perpetrator of a crime against public health.

The detainee, together with the seized drug and the proceedings, has been placed at the disposal of the Torrevieja Investigation and Guard Court, who has ordered his release with precautionary measures.

The Guardia Civil, through talks that are part of the Master Plan for coexistence and improvement of security in educational centres and their surroundings, reminds students of educational centres about the danger of drugs and how the use of them can ruin the lives of those who consume it and their immediate environment.