CD Montesinos womens football team recorded their first victory of the season with a 1-0 home win against CF Ciudad de Orihuela at the weekend.

Lola Paredes scored the only goal to give Montesinos the three points: “The result gives the team a major boost to their ambition to continue improving with every game of the season,” said a club spokesperson.

Racing back on song with goals from Manuel and Guille

Racing San Miguel returned to winning ways after a topsy-turvy start to the Valencia 1st Regional Group 8 campaign with a 2-1 win against CF Rafal on Sunday.

Racing moved into ninth spot in the table placings after victory over Rafal at the Montesico Blanco in a match they dominated.

Racing took three points with goals from Manuel and Guille, in a game that saw the Sanmigueleros putting in a never-say-die die performance.

Manuel’s goal saw the hosts lead 1-0 at the interval. In the second half, Rafal increased the pressure and, contrary to the first, enjoyed some chances, but Racing continued to dominate and came with more clarity.

Richard received a second yellow in a foul necessary to stop the Rafaleño attack, with Racing down to 10 men. Thereafter Rafal netted to reduce the arrears to 2-1.

“We continue adding three points, in what was a spectacular football atmosphere.

“Thank you to the supporters for being there and fighting for victory with us,” said a RSM spokesperson.

Torry move up to 5th

SC Torrevieja returned three points following a 3-0 away win at Sporting Dolores, to move up to fifth in the table.

In the 2nd Regional Group 16 CF Popular Orihuela and At. Benejuzar A shared a point apiece following a 10 goals 5-5 thrilling draw.

Formentera CF returned a 3-1 away win at Sporting Saladar, CF United Elche A hit four goals in a 4-2 away win against CD Benijofar, CD Altet edged a 3-2 win against CD Athletic San Fulgencio A.

Guardamar Soccer CD A top the table on 15 points ahead of Callosa Deportivo CF A on 11 points, Sporting Dolores CF on 10 points in third, with CF Popular Orihuela fourth. 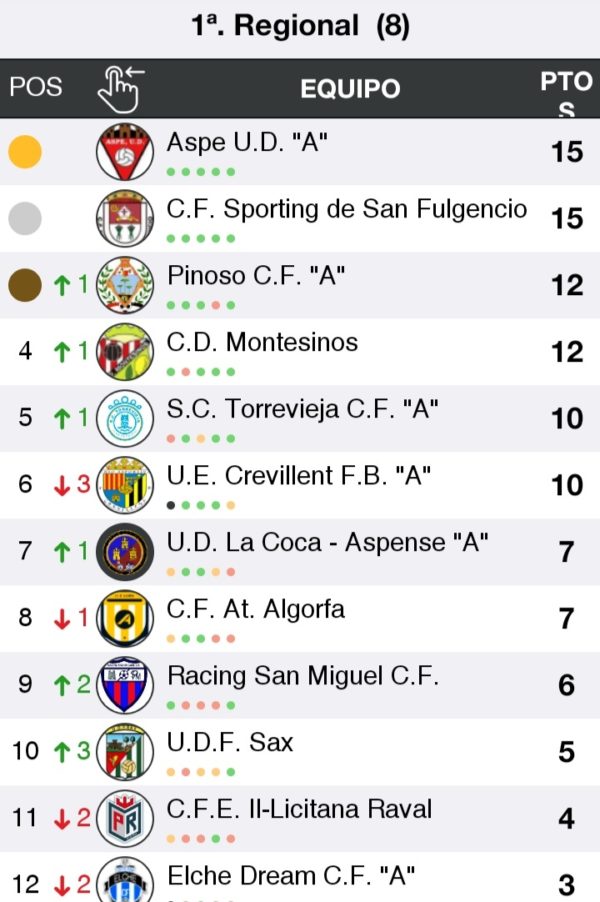