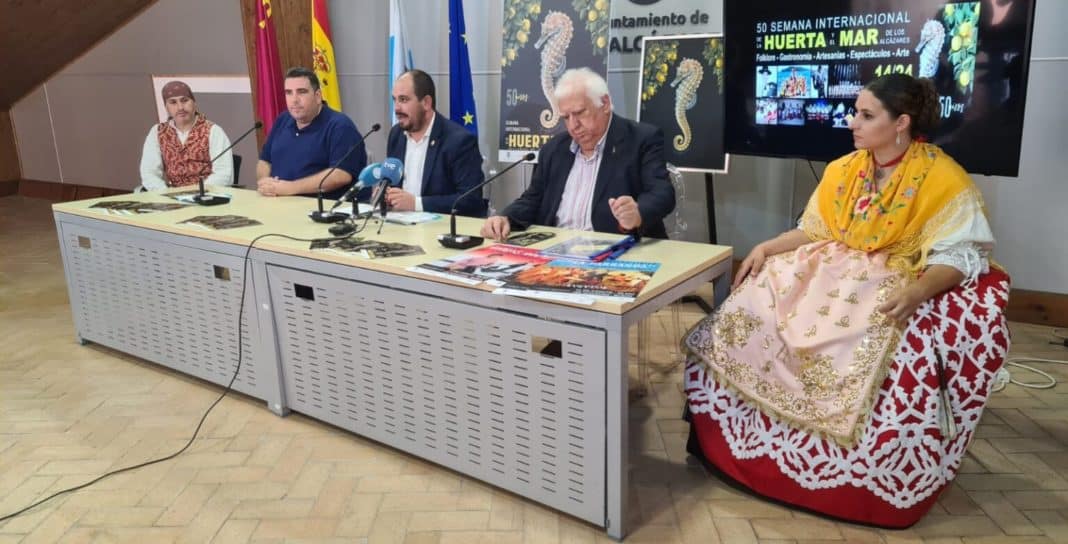 The International Week of the Huerta y el Mar kicks off on August 14 in Los Alcázares with a program on par with the golden wedding anniversary it celebrates this summer with its fiftieth edition.

This meeting of cultures, tradition, gastronomy, and folklore will be held from August 14 to 24 in Los Alcázares. This 50th edition brings with it important novelties, such as the change of location since this year the taverns of the peñas orchards and one of the stages will be located in the Recinto de Fiestas that is next to the Los Alcázares Sports Centre.

“This new enclosure is larger and allows the taverns to be more spacious. In addition, it allows you to have everything in one place, generating a unified space, and improves services such as toilets, lighting and parking”, explains the mayor of Los Alcázares, Mario Pérez Cervera.

Another novelty is the new stage that will be located in the Plaza Real de la Feria to host different performances such as that of the Cuadrilla de Las Torres de Cotillas on August 16, the concert by ‘Sr Aliaga’ on August 20, or the Paparajores Master Class that will also take place on August 20.

“The objective of this festivity is to value and spread the traditions, customs, arts, crafts and gastronomy of the Murcian orchard and for this reason this year we are going to take these demonstrations to different parts of the municipality”, recalls the mayor of Los Alcázares, Mario Pérez Cervera.

Throughout the International Week of the Huerta y el Mar, Los Alcázares will witness the art displayed by some thirty folk, cultural and festive groups, as well as artists who will offer performances and concerts, many of them free.

The Councillor for Celebrations, José Carlos Castejón emphasises that “eight of the ten concerts that will take place from August 14 to 24 will be free so that as many people as possible can access them.”

The International Week will start next Sunday, August 14, starting at 10:30 p.m. with the Inaugural Gala that will be held in the Recinto de Fiestas. In this first act we will be able to enjoy the opening speech that will be given by the Murcian actress Pepa Aniorte, and the free concert by Diana Navarro.

“Innumerable men and women unite their efforts and their enthusiasm so that the International Week of the Garden and the Sea is the reality that it is today. The success achieved is due to all of them and to a loyal public that multiplies each edition and for which we carry out all the necessary effort”, Juan García Serrano, the director of the International Vegetable Garden Week, highlighted during the presentation of the programme.

Tickets for the concerts are already on sale at the Town Hall, from Monday to Friday from 9:00 a.m. to 2:00 p.m., and on the website www.giglon.com. “They can also be bought at the box office in the festival venue itself from August 14”, recalls the mayor of Festejos José Carlos Castejón.