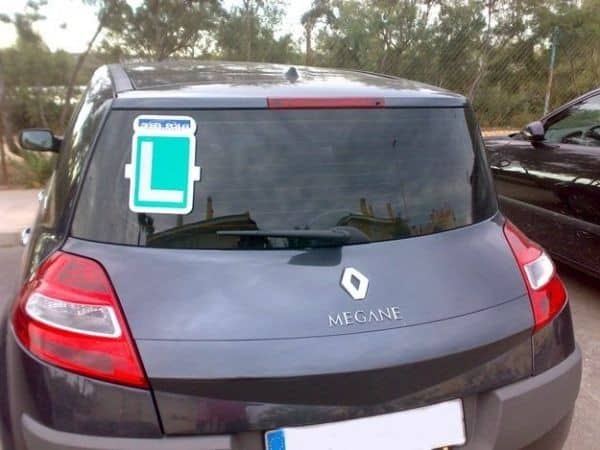 It may be some time ago that many of you passed your driving test, but every day there are many more embarking on the early stages of their driving experience, novice drivers. According to an investigation carried out in 2019 by a group of scientists in Arizona (United States). It has been found that novice drivers are eight times more likely to be involved in a traffic collision or minor incident during the first three months of driving. These are caused by being involved in “scares” such as sudden braking, swerving or unexpected acceleration. For the first year after passing the driving test, new drivers must display a green-backed L plate on the back of the car. The mandatory sign serves to help other road users know that the driver is a novice. Although it is commonly called an L plate, the official name is the V-13 signal. The sign is formed of a white L on a green background. The surface is reflective (level 2), and its measurements are 19.5 centimetres high by 15 wide. Likewise, the letter must have a length of 15 cm high and 10.5 wide, with a line thickness of 3 cm. In the same way, it is not enough that the L is visible, but it must be placed correctly: in the upper left part of the rear window of the car. If you are a novice driver, the penalty for not displaying the L sign is 100 euro, but it does not entail the deduction of points on the driving licence. The justification for it is in article 18 of the Road Traffic Law: «Signs on vehicles whose purpose is to inform road users of certain circumstances or characteristics of the vehicle in which they are placed. The service it provides, the cargo it transports or its own driver, will be adjusted in terms of its characteristics and placement to the provisions of Annex XI». In the same way that you can get a fine for not displaying it, the same applies for keeping the sign when it is no longer necessary. Therefore, the regulations are clear: one year term. If after 12 months from when the permit was granted, the novel licence plate is not removed, the owner will be punished. Being a minor infraction, the fine will be 100 euro. For this reason, it is also necessary to keep this in mind if the vehicle is shared between a novice and experienced driver. According to the DGT, a person who has just obtained a driving licence has eight initial points. If after two years, you have not received a fine, it will increase to 14. Likewise, after another three years without committing infractions, another one will be added. Taking the driver to the maximum number of points established by the authorities. Regardless of the traffic violations that have been committed, the term to recover the initial balance of 12 points is two years if no new offences are committed. If all credit has been lost, drivers will have to go through a recovery course at the DGT offices. Novice drivers are not subjected to any additional speed restrictions. The alcohol limit set for novice drivers is the same as that for professional drivers for the first two years, thus lower than the general population. In other words, novice drivers have a limit of 0.30 grams per litre of blood (or 0.15 milligrams per litre of expired air), compared to 0.25 for other drivers. Although, it is worth remembering that if you drink any amount, no matter how little, it is recommended that you do not drive.   The post Novice Drivers first appeared on N332.es - Driving In Spain.