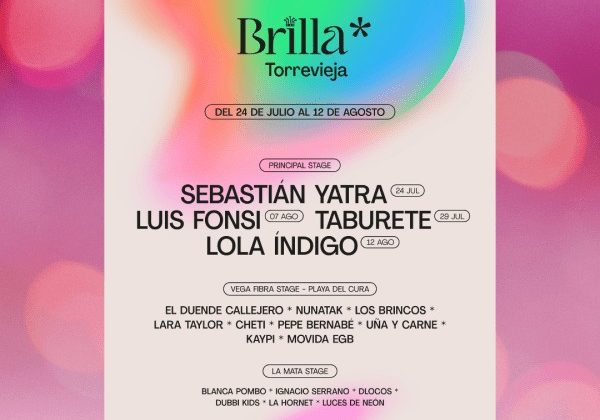 Sebastián Yatra, Luis Fonsi, Taburete and Lola Índigo are the stars of the poster for the second edition of the boutique music festival “Brilla Torrevieja”.

The city of salt will once again enjoy performances from July 24 to August 12 spread over four stages located in different locations.

The presentation by the Councillor for Culture, Antonio Quesada, and the promoters of the initiative, Pablo Pamies and Antonio Castillo, took place today.

As for the artists, Brilla Torrevieja presents a line-up with top-level performances distributed throughout the festival and aimed at all audiences:

Tickets go on sale this Thursday, April 7, and can be purchased through the website brillatorrevieja.com .

A second edition full of novelties

After the first edition and its good reception, Brilla Torrevieja continues with its boutique festival essence, once again presenting a unique event full of novelties. In this second edition, the festival extends its duration from one to three weeks, from July 24 to August 12.

In addition, a format is presented in which Brilla Torrevieja is made up of 100% music and 90% culture, with performances and cultural activities spread over different locations throughout Torrevieja: Antonio Soria Park; Torrevieja beaches; Plaza de Encarnación Puchol de La Mata and the Municipal Theatre. These locations surrounded by docks and piers are the ideal spaces for holding all kinds of live shows.

The Councillor for Culture, Antonio Quesada, has highlighted that “it is a different, innovative and experiential format, which not only focuses on a space but also covers different points of Torrevieja and La Mata, which will mean a large economic injection in the 15 days that the event lasts”.

“The objective of this new format is based on making the entire city participate in the Brilla Torrevieja event. Distributing activities in different parts of the city may be the best way to generate economic synergies. Our goal is to ensure that the city of Torrevieja ends up feeling this festival as something of its own”, says Pablo Pamies, one of the promoters of the initiative.

As for the performances, another of the main novelties is in the location, since the concerts will take place on four different stages. The “Principal Stage” (in Parque Antonio Soria) will host performances by Colombian Sebastían Yatra, the group Taburete, Puerto Rican Luis Fonsi and Lola Índigo. “Elcura stage” where Cheti, Pepe Bernabé, Movida EGB, Duende Callejero, Los Brincos, Uña y Carne, Nunatak and Dlocos will perform.

“Materna Stage” will receive Lara Taylor and Luces de Neón, Dubbi Kids, Blanca Pombo, La Hornet and Ignacio Serrano. “Teatro Stage” will be the space in charge of hosting performances and monologues on the 9th, 10th and 11th respectively.

Antonio Castillo, another of the promoters, has stated that “all this wide range of shows and novelties will attract a greater number of visitors and tourists, which will mean a greater benefit for businesses in the town and surrounding areas.”

In short, the second edition of Brilla Torrevieja promises the visitor a unique experience, with a wide range of free cultural and musical activities that will encompass all the demand for family, cultural, musical and gastronomic leisure both in the city of Torrevieja and its surroundings.

Stevie scores at Newcastle and Wycombe