Thousands of people took to the streets in cities across Europe, and all around the world on Saturday, to protest against Russia’s invasion of Ukraine.

On Sunday morning it was the turn of Torrevieja,  where around two thousand people, all residing in the city, demonstrated in the Plaza de la Constitucion, calling for the European Union (EU) and NATO to act to defend their country from the Russian invasion.

Most of the demonstrators  were Ukrainian citizens although there were also plenty of Russians among the large crowd, along with many others from neighbouring European countries. They were joined by the mayor of Torrevieja, Eduardo Dolon, who took to the stage to offer his, and the support of the municipal council, in the face of Putin’s aggression

Solemn music played while speakers called for Ukraine’s airspace to be closed, so that it would be impossible to carry out attacks from the air, offering more protection to the civilian population. 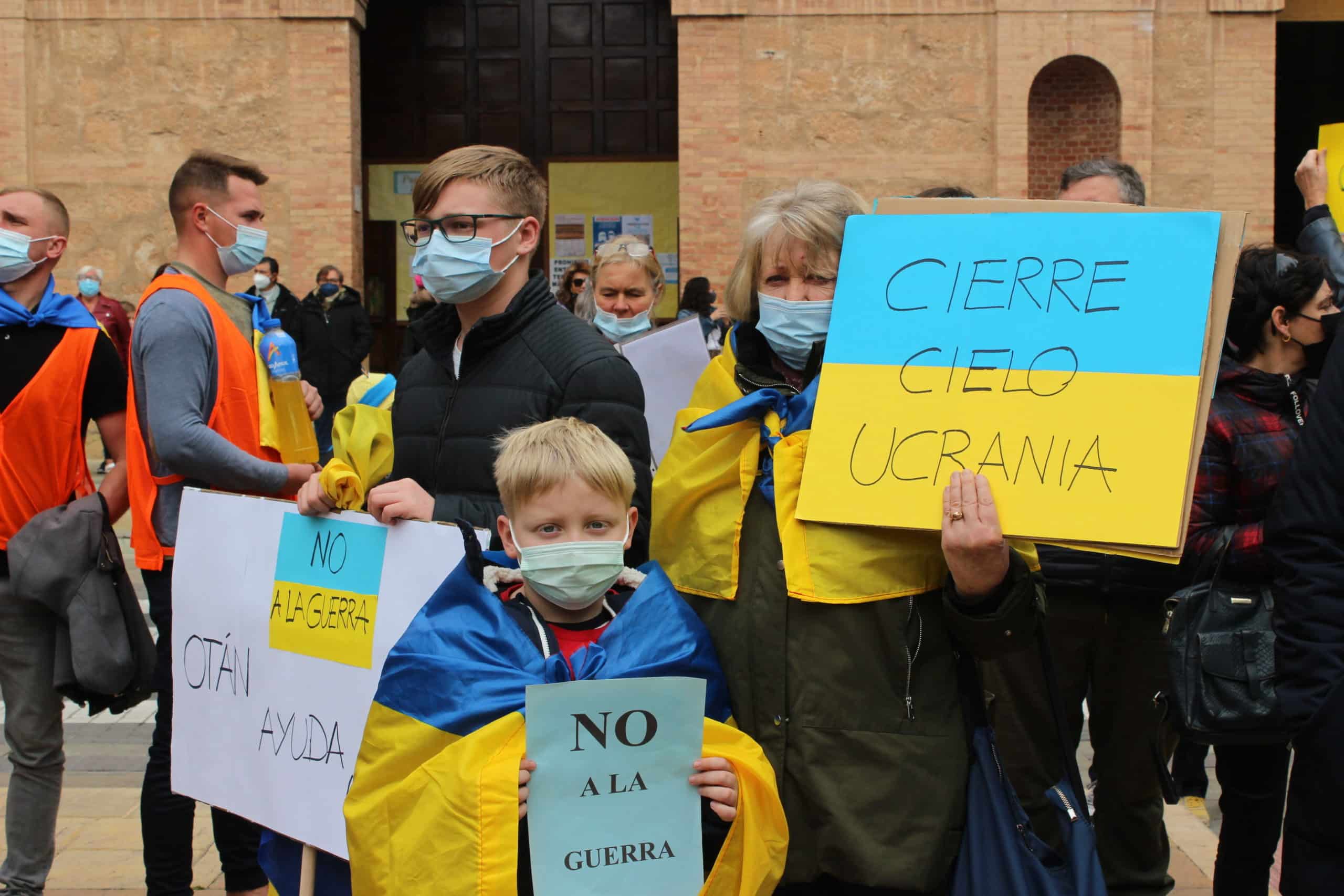 Organised by the Association of Ukrainians of Torrevieja,  it was attended by of people of all ages, most of them with Ukrainian flags and other blue and yellow elements, as well as many carrying different posters calling for an end to the war and in opposition to the Russian president, Putin.

There were also flags and placards calling for the EU and NATO to intervene in the events.

Thousands of kilometres away, from the safety offered by Spain, Ukrainians and Russians helplessly witness the escalation of the war in Ukraine.

The Ukrainian community in the province fears the worst for their country, after they woke up on Thursday morning to images of the bombings across many parts of their proud nation. The tension due to the conflict and the fear crossed the intervening borders at the speed of WhatsApp, as direct information from relatives brought the conflict much closer to their homes in Spain. 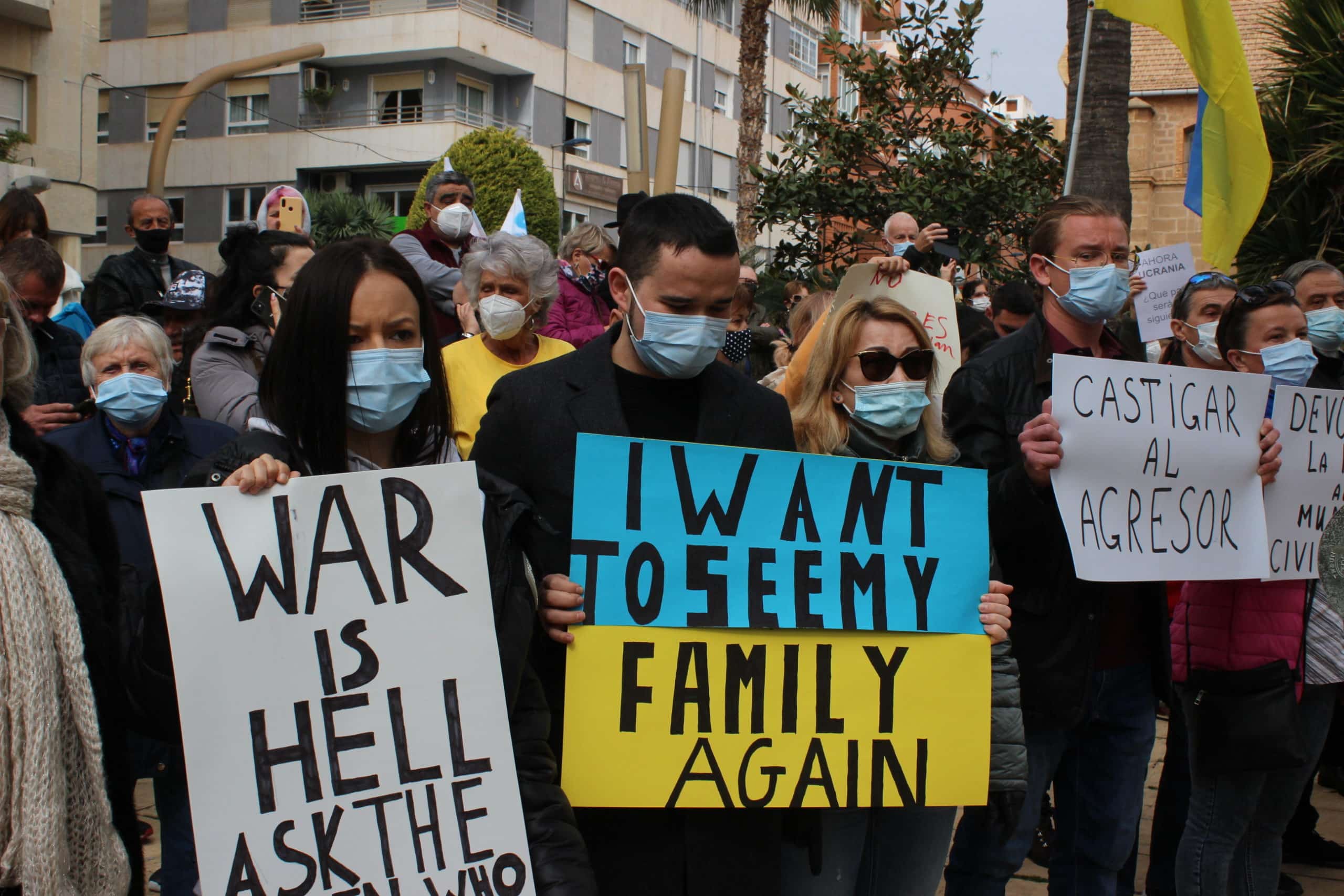 Two important communities coexist in the city of Torrevieja where there are 4,484 Russians and 3,203 registered Ukrainians. They came to the city in two waves in search of work and opportunities to prosper. Many did so in the early 1990s, after the Soviet Union had just dissolved, with many more arriving during the economic boom in the first few years of the 2000s.

Both communities have expressed their distress and concern. Rage, anger and, above all, a great powerlessness were the feelings among the Ukrainians. The Russians kept quiet, more restrained but many still agreed that they felt ashamed for what is happening with a country that they feel is a brother. 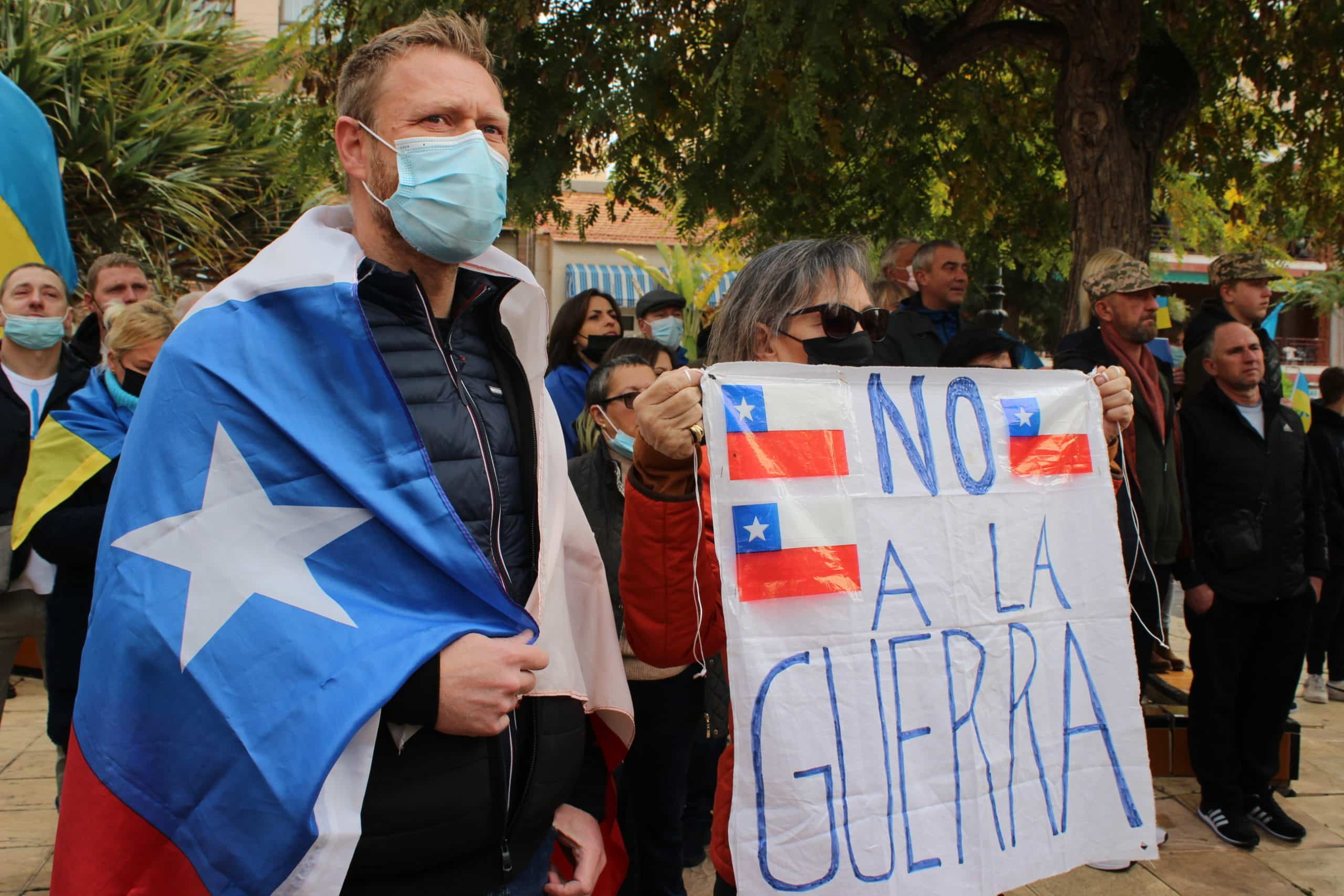 In a foreign country, however, there is no tension as Russians, Ukrainians, Belarusians, Moldovans, Kazakhs all share daily life in the city where they settled several years ago: services, businesses, restaurants, classrooms in schools and colleges.

The Torrevieja IES, where students from both countries study, is a true reflection of what is happening outside.

Alina, from a Ukrainian family, shared her concern with her classmate during breaktime, showing the videos sent from her country by her friends, while in class the history teacher tempered spirits by calmly trying to explain the reasons for the conflict.

Peter Andrushevich is a Russian who has lived in the municipality for 25 years.  He is also the spokesman for a Russian Association in the city where he says that Russian residents in Spain are not pro-Putin. 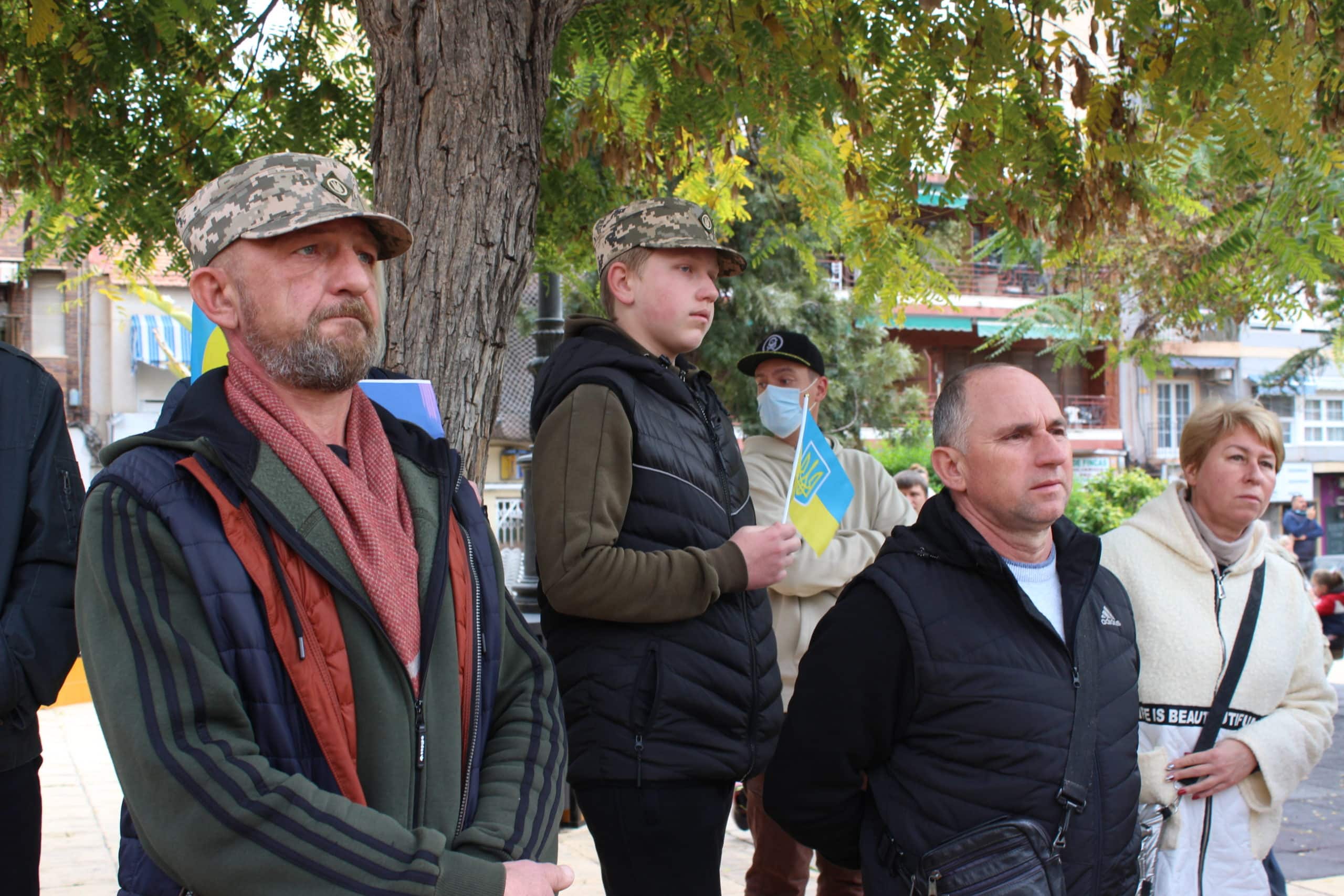 “The Russian-speaking community likes to integrate and respects Spanish culture,” says Andrushevich. “Russians and Ukrainians have no problems with each other, nor do they cause problems for society,” he insists after recalling that there are entire families between the two nationalities, husbands from one country and wives from the other and vice versa.

Natalia Zhezhnyavska is the secretary of the Association of Ukrainians of Torrevieja, which is the most important registered community in the province. “We feel powerless because we can’t help from here and we don’t know what’s going to happen. It’s awful.”

She said that European politicians should support Ukraine so that it is not left alone, “because today it is Ukraine and tomorrow it will be Europe and Spain is not so far away. These types of people do not stop, they will want more. We have to unite, if we don’t want a world war, we have to stop this now.”

Together with her compatriots, Natalia’s expresses great concern for families, for people who are close to her. “We suffer because our families and friends are there. Many Russians have called me saying that they feel tremendous shame for being Russian. We have always been brothers and we have a shared history. This conflict kills those ties.”

Irina, who works in a 24-hour supermarket in the centre of Torrevieja, is also clear: “I have not seen problems here in Torrevieja between the Ukrainian and Russian communities.” “We are Ukrainians and 80% of our customers are Russians”, she says, “my colleague is Russian”.

“Both Russians and Ukrainians are very sad. This is the problem of a man with a lot of power who believes himself to be immortal”, says Irina, who also warns: “I think this is not going to be a matter of days. We feel total pain and helplessness. At six o clock on Thursday morning we received the first news that they were bombing. There is no fuel, no food in the stores, people cannot move around. Banks and ATMs have closed.”

Anatoli and Alexander have a removal company, next door to the Association of Ukrainians of Torrevieja. They are Russians, but they do not cut off their Ukrainian neighbours. “This is a problem between two Presidents, but more from Putin, who is authoritarian and does not seem to be right in the head,” said Anatoli.

Now, many residents who live in peace in Alicante are trying to bring their families here. Is not easy. Added to the reduction of air travel due to the armed conflict are bureaucratic obstacles. Angela has already tried, and she has now offered herself as a volunteer translator at an NGO which will help those who needs to apply for asylum in Spain. “Not all Russians are the same,” she says adding that everyone trusts that the conflict will not break the harmony of the two communities in our host land.”

PIOC Call for show of Support in Orihuela

Meanwhile PIOC is hoping to hold a rally next Sunday in support of the people of Ukraine. Spokesman Peter Houghton told The Leader, “We will ask the town hall to help refugees with legal matters like a visa, basic funding, help with school for children and spanish classes.

“We are going to ask for a permit to hold the rally and we want other political parties and associations to join us. This is about politics, but we need to help the people of Ukraine at this awful time. We need flags and banners from countries across the world, to show support for Ukraine, a sound system, Ukraine flags. We will contact the mayor of Orihuela and other political parties. The future of Europe is at stake.”