The Torrevieja health department has registered five deaths from covid in the last week, 10 to 16 January, according to data provided by the Ministry of Health to the municipalities.

During the same period hospital occupancy continues to rise with the Torrevieja Hospital admitting 60 patients for COVID-19, 14 more than the previous week, although the number of patients in the Intensive Care Unit (ICU) remains at ten, the same number as seven days ago.

The ICU increased it’s capacity at the end of December, reinforcing it with spaces from other services such as the Postoperative Resuscitation Unit, as it implemented the health area’s covid contingency plan.

Meanwhile, the accumulated incidence of cases continues to increase without showing signs, for the moment, of slowing down, as has happened in other areas of the community, where the number of positives continues to grow but at a slower rate. 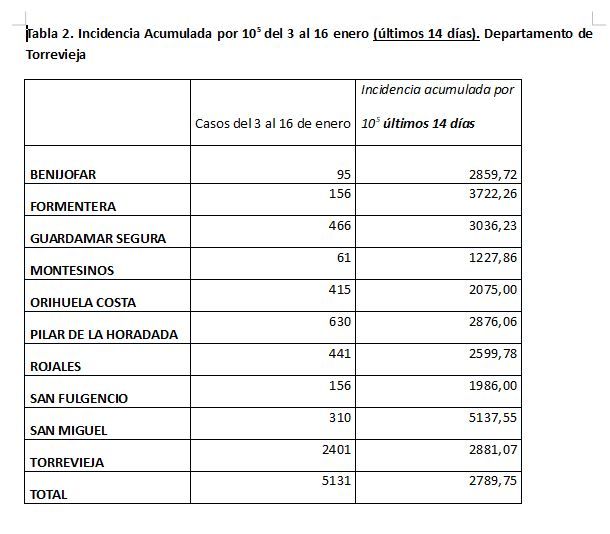 In the city of Torrevieja alone, 2,400 cases have been reported in the last two weeks. That is, 3% of the Torrevieja population that has been infected in the last 14 days, a figure that does not include positives confirmed with pharmacy antigen tests that, for various reasons, do not end up included in the system, Pilar de la Horadada (630), Guardamar (466) and Rojales (441).

Orihuela Costa, which has 30,000 registered residents, added 415 positives in the last two weeks, which reflects an underreporting in this area with large communities of Central European residents.

In the Torrevieja area, which includes Orihuela Costa, Pilar de la Horadada, Rojales, Guardamar, San Fulgencio, San Miguel de Salinas, Los Montesinos, Benijófar and Formentera, more than 300 people have died from the pandemic since March 2020, according to the statistics from the Ministry of Health.