Two goals from Pere Milla in the opening 15 minutes sealed an unlikely win for Elche at Espanyol on Monday night.

And it was a victory that the visitors deserved, which lifts them out of the relegation zone for the first time in recent weeks.

Espanyol ended up paying dearly for its initial errors in defense. In a match that went from 0-0 to 0-2 in just eight minutes because of a brilliant performance fromPere Milla. The striker scored against Bará last time out and on Monday evening he converted a double worthy of those predators who know how to read the play in advance and can always find themselves in the right place.

In the 6th minute he took advantage of a low centre by Carrillo and a failure of Vidal to cut out a fairly innocuous cross to score with a tap in at the far post and then just eight minutes later, on the quarter hour, he stooped to head home a ball looped into the area by Mojica, taking advantage of a poor start by stand in keeper Joan García, who was replacing Diego López between the sticks.

However, Espanyol managed to get back into the game before the break. Keidi fouled Gonzalo Verdú in the corner of the area and after a VAR review Raul stepped up to nail his tenth goal of the season.

Following the break, Espanyol came out rather more determined but Elche soaked up everything that was thrown at them. They were far superior in the air with Enzo Roco and Gonzalo dominant over both Raul and Loren who were both unusually quiet.

Raul De Tomás did have one late volley but Edgar Badia was equal to the shot getting a strong hand to turn it around the post.

Just over the halfway mark, the three points, Elche’s first victory of the year, lifts them into sixteenth, two points clear of Alaves, who drop into the bottom three.

Next up a home match against Villareal on Sunday and then Real Madrid will be the visitors to the Martinez Valero on Wednesday in the last 16 of the Copa del Rey. 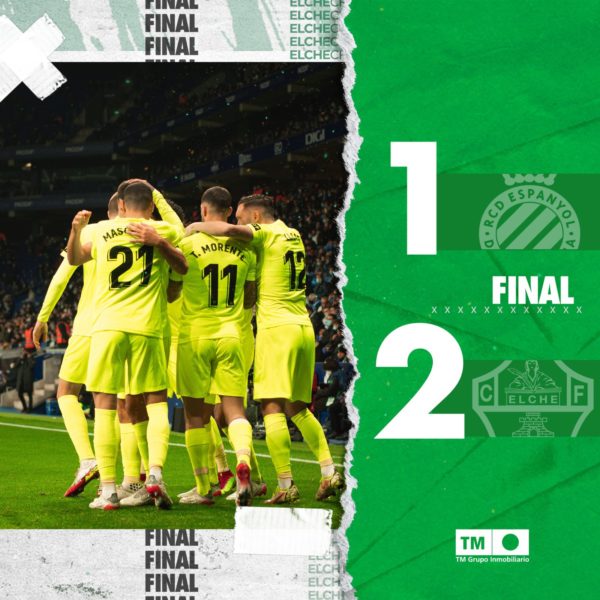