The 2022 Vuelta Cycling Tour of Spain will feature the provinces of Alicante and Elche as the main points announced the Provincial Council of Alicante.

The announcement was made after a meeting took place with Javier Guillén, general director of Unipublic, which is in charge of organising the Spanish Vuelta round.

The 77th edition of La Vuelta will coincide with the 200th anniversary of the provincial institution.

The Palace of the Provincial Council staged the meeting with president, Carlos Mazón , Javier Guillén, the technical director of La Vuelta, Fernando Escartín and the mayors of Alicante, Luis Barcala, and Elche, present.

Carlos González said: “The passage of La Vuelta 2022 through our land will be very significant, especially because it coincides with the 200th anniversary of the Alicante Provincial Council.”

President, Carlos Mazón said: “For the moment, we can only advance that it will be a stage full of surprise, which will unite the cities of Alicante and Elche.

“The effort that has been made to attract this test to our province, since the initial programming that the organisation had was very complicated, and to design the best possible route”.

The general director of Unipublic, Javier Guillén, said: “Alicante is a destination historically linked to cycling and a paradise for the practice of the sport, since it combines sea, mountains, ports and plains, as well as a perfect climate.

The 77th edition of the Vuelta Ciclista a España will begin on Friday, August 19 from the Dutch city of Utrecht and will end on Saturday, September 11 with the traditional circuit through the Paseo del Prado and Cibeles in Madrid .

The rest of the stages will be officially presented on Thursday, December 16 at IFEMA , Madrid. 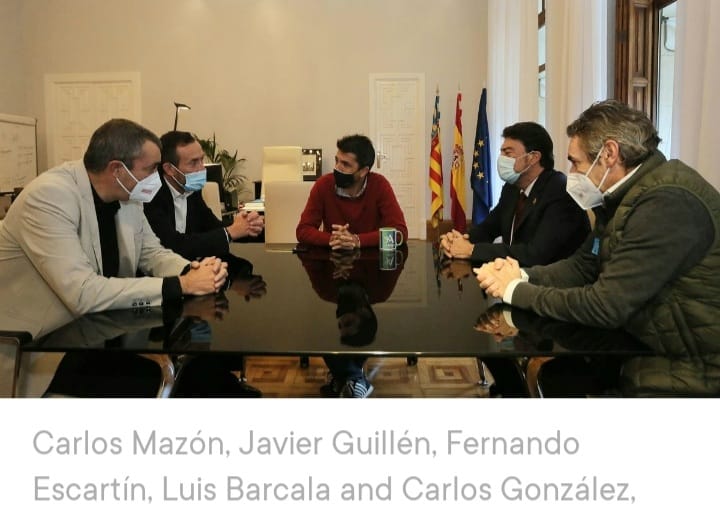 The municipal representatives thanked the Provincial Council for its involvement and highlighted the importance of this international event at a sports and tourism promotion level.

“Since I am mayor of Alicante, it will be the third time that the Spanish round stops in the city, “said Barcala.

“It is a very significant event for the dissemination of our destiny,” he added.

Carlos González  said: “The city of Elche is encantad, being one of the leading enclaves of La Vuelta, because we believe that this is a proposal that we will strengthen the international profile of the locality” .

Duting Vuelta 2021the province of Alicante hosted in August two stages of the Spanish round, which included a final stage in the natural environment of the Balcón de Alicante, in Tibi, with a departure from the coastal town of Santa Pola.

Mazón added: “The Provincial Council for this event is of such magnitude and relevance, and we aware of its potential to spread our territory, boost our municipalities, reactivate our tourism and generate wealth and employment.”

Fernando Escartín, technical director of the event and who was a runner for the Kelme Sports Group, said: “Alicante is a land of cycling, here we have lived great stages and whenever we can, we return. “This year we have lived two days unique and in 2022 we will repeat with a spectacular stage that will make the public enjoy a lot.”