Approximately two hundred and fifty representatives and members of twelve Residents Groups and Associations gathered at Flamenca Beach Promenade on Thursday morning to protest about the ‘serious deficiencies’ that are being endured by inhabitants of the Orihuela Costa.

With their pots and pans, their symbols and their tin lids the group was determined to make as much noise and disruption as they possibly could although, because of a last minute change of location, forced on them by the Policia Local, it largely fell on deaf ears.

For many weeks the demonstration had been scheduled to take place at the Playa Flamenca Town hall but just hours before protesters were due to arrive, organisers were informed that the venue had been moved.

Many of them subsequently turned up at the town hall building only to be escorted by the police to the new location.

In the end there were almost 250 demonstrators assembled on the promenade, noisily beating their pots and pans.

Called by AVOCA (the Asociación de vecinos Orihuela Costa en Acción), under the banner “Enough already,” campaigners shouted out in both Spanish and English, “We want Services. We pay our taxes but we are abandoned by the council.”

Posters and banners delivered the same messages with many calling for the segregation of the coast from Orihuela because of the Ayuntamiento’s ‘neglect.’

Twelve associations and social groups were represented, each demanding that the local government resolve the “serious deficiencies” in services and deficiencies of the basic needs. Residents reproached the municipality as they contribute far more to the municipal budget than they receive in return.

AVOCA spokesman, Tomás Moreno, told the gathering that people on the coast “have suffered the same problems for many years, but they have now, increasingly, become more serious.”

He said that in summer “the deficiencies are further magnified as our 30,000 permanent residents are quadrupled by the holidaymakers and, as well as the residents, the mounting problems also affect the many thousands of tourists that visit, thereby running the risk of losing them as a result of the conditions from which we suffer.”

It is not the first time that residents of Orihuela Costa have taken to the streets to object about what they consider to be abandonment by a government that is thirty kilometres away, nor will it be the last.

The protest coincided with the ordinary plenary session that was being held in Orihuela to which they wanted to express their “exhaustion and indignation” at the situation and it’s long list of problems that have remained, unresolved for many years. 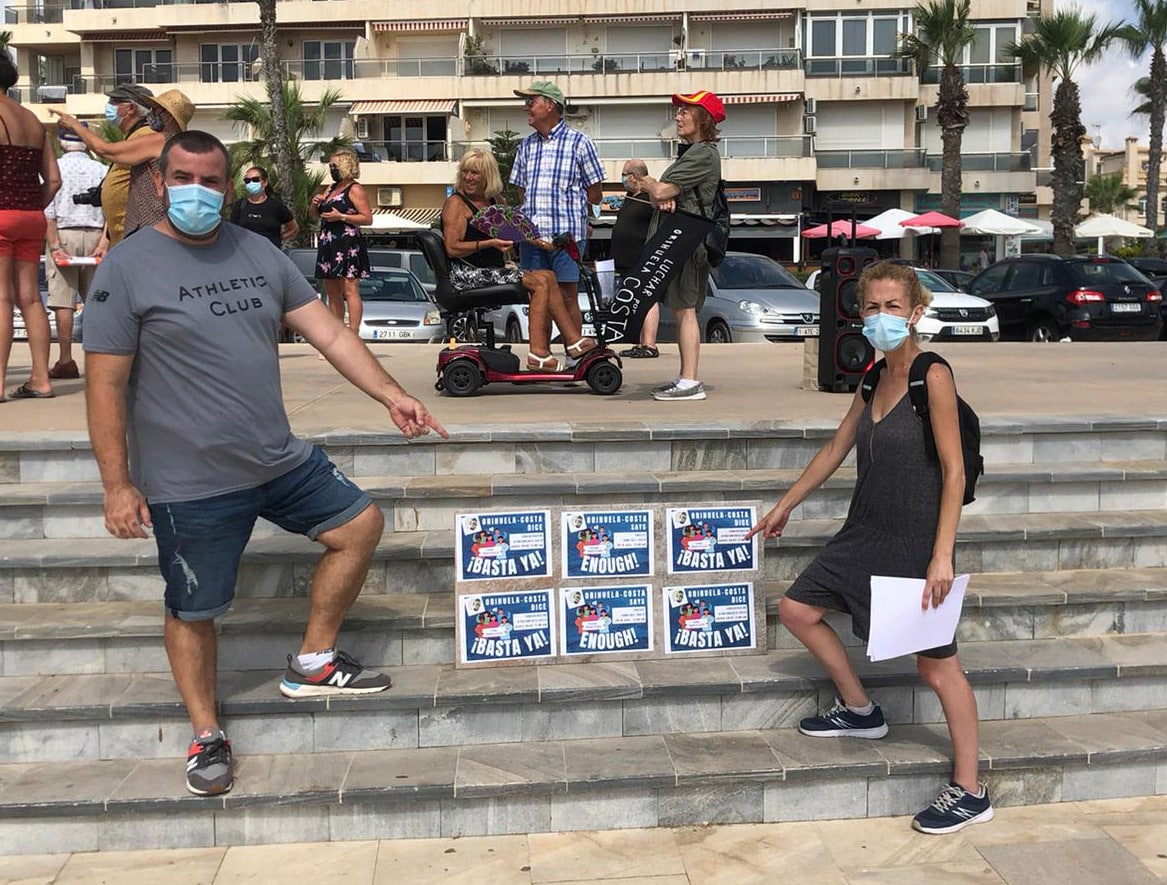 The main criticisms were directed against the mayor, Emilio Bascuñana, who they say only visits the coast for occasional photo opportunities. It is to him that they also attribute the absence of a municipal library and a cultural centre that would be used as a meeting place, where associations, young people, pensioners, and other groups could meet, and in which cultural events could be held.

They also reproach him for the controversial absence of the pedestrian bridge over the AP7, the lack of any resolution to a problem that, for a dozen or more years, continues the put the lives of the residents of Lomas de Cabo Roig at risk, as they are forced to cross the bridge on foot every day.

They say that despite receiving more than 20 million euros from the sale of land on the coast very little of it has been used by the council to improve or renew obsolete coastal infrastructure while the June plenary session has just approved an investment of 10 million euros with EDUSI funds from the European Union destined exclusively for projects in Orihuela City.

There is a great deal more to be unhappy about, according to the residents, such as the construction of more than 2,000 homes in Cala Mosca, “which will be dependent on infrastructure that is already unable to cope.  They criticise the broken refuse containers, dirty streets and a lack of parks, weeds and prunings that remain by the roadside for weeks on end, overgrown and diseased palm trees, the lack of an eco-park, potholes, inadequate and dangerous roads, broken and missing road signage, which poses a serious risk to road safety, broken and inadequate lighting,  and a lack of security with far too few police officers.

Moreno also spoke about “recurring floods as a result of the council failure to implement the Rainfall Plan with more urgency or the lack of repair, despite the time that has elapsed, of the coastal cliffs, which suffer regular subsidence in many areas, due to lack of maintenance, the most infamous being the La Caleta sinkhole, which is almost 2 years old and which seriously threatens part of the promenade with collapse.”

It is clear that the Orihuela council has failed miserably in their governance responsibilities toward the Orihuela Costa by allowing the area to sink into this desperate, almost unmanageable, situation. The area is withering on the vine and without serious shifts of resources into the coastal area the problems will almost certainly deteriorate even further.

But the truth of the matter is that the situation will not improve until such time as there are a serious number of votes to be won on the coast.

Currently the Orihuela municipality has approximately 48,000 people who are eligible to vote, but unfortunately, despite the number of residents on the Orihuela Costa exceeding 30,000, in the 2019 Municipal Elections, a total of just 2527 votes were cast in the areas 6 polling stations.

Elections aren’t just about who votes, but who doesn’t vote, so as can be seen, it’s not demonstrations that will determine Orihuela Costa’s Services, it’s votes in ballot boxes.