On her first visit to Spain, the British Navy Offshore Patrol Vessel HMS TRENT will spend this week in the port of Cartagena, Murcia.

HMS TRENT is building operational links with allies and partners in southern Europe. She is visiting Cartagena to listen to and learn from Spanish Navy counterparts at the Maritime Action Operations and Surveillance Center (COVAM), located at the General Headquarters of the Maritime Action Force in Cartagena, Murcia.

HMS TRENT left the UK at the end of March for an enduring mission to the Mediterranean, with a focus on the security of southern Europe and West Africa, as announced in the UK Government’s Integrated Review of Defence and Foreign Policy. HMS TRENT arrives in Spain after spending her first 4 months operating in North Africa, the eastern Mediterranean and the Black Sea.

HMS Trent’s Commanding Officer, Cdr Tom Knott MBE RN, said: “We’re delighted to have arrived in Cartagena today to build on the strong ties between the UK and Spain. Already in the four months we’ve been in the Mediterranean, we’ve had the opportunity to work with the Spanish Navy, most recently with ESPS Rayo as part of Exercise Breeze.” 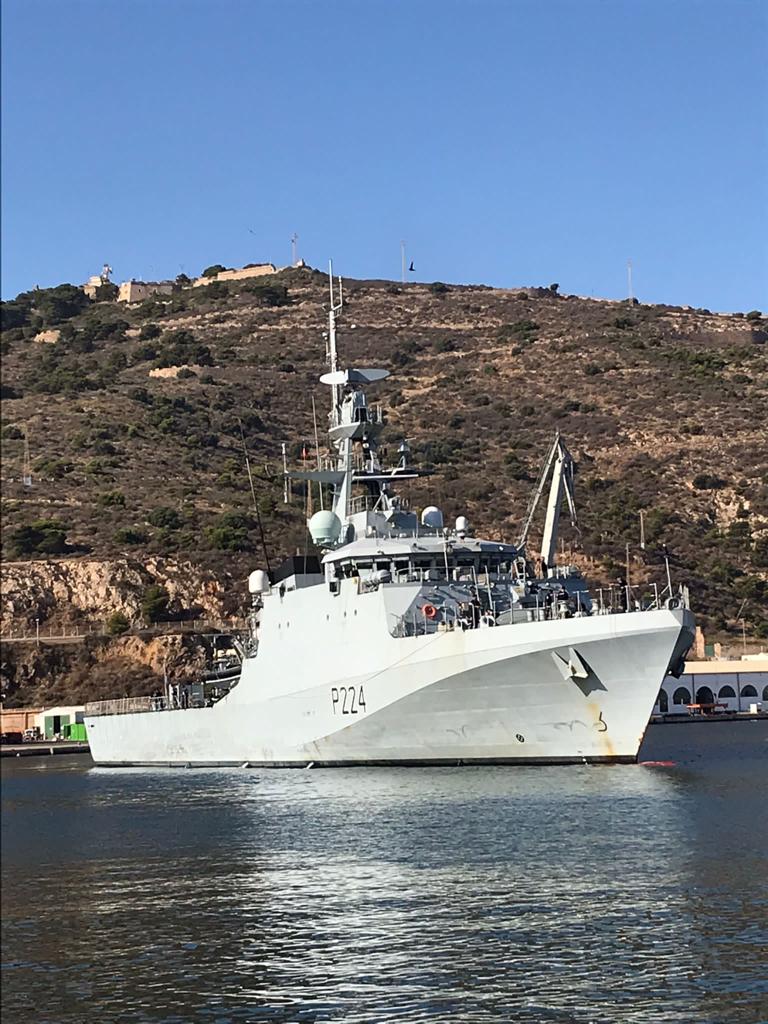 “Our enduring presence in the region shows that the Royal Navy is committed to supporting our Allies and Partners here, tackling shared threats to our security and keeping the sea safe for mariners. With our upcoming visits to West Africa and the Gulf of Guinea later in the year, I’m looking forwards to learning as much as possible from our Spanish colleagues at COVAM and hearing their experiences of operating there,” Cdr Tom Knott added.

British Ambassador to Spain Hugh Elliott welcomed the arrival of the ship:

“I am delighted that HMS TRENT is in Cartagena this week. It is another great example, following the recent visit of HMS KENT frigate to Alicante, of the UK’s continued commitment to European security and our shared priorities in the area. ”

“The presence of HMS TRENT in Cartagena is a great opportunity to learn and collaborate with Spain, in a visit that marks the beginning of an enduring relationship over the coming months and years. I hope this visit is the first of many more to come,” said the ambassador.

HMS TRENT’s visit to Cartagena, following the recent visit of the Type 23 frigate HMS KENT to Alicante, shows the UK’s continued commitment to European security and our shared priorities in the region. The ship has docked today in the port of Cartagena, and there will be a reception and a capability demonstration for local authorities.

The UK and Spain have a proud history of working together as Allies in defence and security. This includes joint patrols as part of NATO’s Baltic Air Policing operations and until recently contributions to security operations in Afghanistan.

Later this year HMS TRENT will head to West Africa where she will work alongside partners from Spain, France, Italy and Portugal to improve security in the Gulf Guinea, including counter-piracy operations.