The President of the Generalitat, Ximo Puig, met with the British Ambassador, Hugh Elliot, on Monday, where he raised the possibility of establishing a safe travel corridor for British tourists who choose to travel to Spain.

During the meeting he gave the ambassador reports that prove that the Community is the safest area against Covid in the whole of the EU.

Puig said that to achieve normality “after the terrible nightmare we have all endured” the most important thing is the restoration of mobility. As such he said that he considers it necessary “to overcome the restrictions that still exist”, in reference to the prevention measures required by the British government, which consist of a ten-day quarantine and two PCR tests upon returning to UK.

These measures are applied to the territories classified in the UK epidemiological Traffic Light system as amber, one of which is Spain, to establish restrictions on people moving outside its borders.

The president was able to show the ambassador the data pertaining to the current epidemiological situation in the Valencian Community, with a cumulative incidence of less than 30 cases per 100,000 inhabitants, places it as the autonomy with the lowest AI in Spain, and a one of the lowest in Europe.

For this reason, he insists on the need for the classification made by the British government to be territorialized and placed in a position of lower risk. 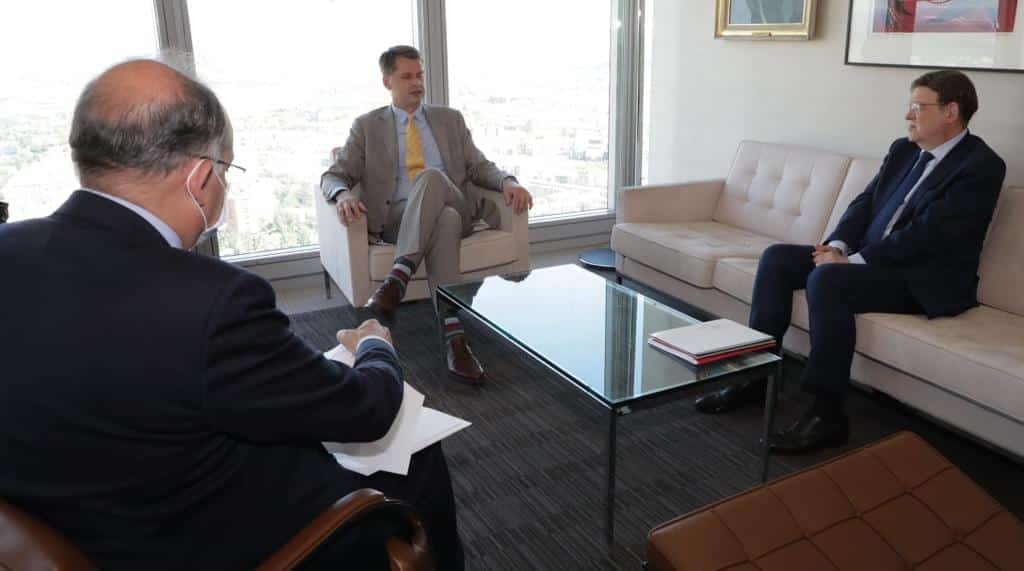 Puig explained that Spain has taken a step forward today, in reference to the fact British tourists can now travel to the country without the need for PCR tests, and has shown his hope that the United Kingdom will respond to the request raised in the upcoming reviews of its restrictive measures.

Hugh Elliot, meanwhile, described the Community as the leading autonomy in the control of the pandemic and highlighted the close ties between the United Kingdom and the Valencian Community.

The president stated that “we are on the way out of the pandemic having already made substantial progress” and in the coming months we must once again ensure the “maximum connectivity and capacity to attract visitors from the United Kingdom who we have always trusted in the Valencian Community and who we will trust again “.

The importance of tourism from the United Kingdom is reflected in the annual pre pandemic visitor data, which placed it as the main source market.

In 2019 the Community received 2.8 million British tourists, which represented 30% of the total number of foreign tourists arriving that year. These visits involved a spend of around 2,500 million euros, which means that each British tourist spent approximately 878 euros on, that is, about 112 euros a day for a stay of about 8 days.

Last year the number of British tourists in the Valencian Community was 0.6 million, with an average expenditure per tourist of 915 euros, and an average daily expenditure of 101 euros, representing a total of 540 million euros.