The new de-escalation measures announced by the President of the Valencian Community, Ximo Puig, on Thursday evening, which will come into force on Monday 26 April, will see the extension of trading hours for Bars, restaurants and shops until 10pm

However, the curfew will remain at 10pm so in reality trading will have to cease prior to the deadline in order to ensure that people can return home.

The restriction of night mobility occupied a large part of Thursday night’s debate, that lasted an hour and a half. However, it will remain at 10 pm even though the Ministry of Health wanted to extend it by one hour.

The closure of the Community border will also remain in place, but everything now indicates that will change from May 9, the date when the state of alarm will come to an end.

“This is the last fortnight before a new phase that we will enter on May 9, it is a time of hope,” said Puig about the day when the regional perimeter will end. “It will be a different atmosphere,” he said before adding that it will still depend on the situation with the pandemic and the progress with vaccinations that will allow the borders to open.

The capacity in bars, shops and restaurants will remain the same, that is 100% on the terraces and 30% indoors, with tables of six. Neither are there any changes in the meeting of non-cohabitating people, which is maintained in public areas at six.

However, the capacity for cultural activities such as theatres, cinemas and concert halls changes from 50% to 75%, a boost to a sector that insists that it is safe and that is also suffering the ravages of the economic crisis.

Civil and religious ceremonies and celebrations will also see their capacity increased from 30 to 50% .

The relaxation of the measures comes as the community continues to demonstrate an incidence of 40 cases per 100,000 inhabitants, a figure that is six times below the national average and well below the levels seen in other European countries, “the only one in Europe that is at Low risk”. 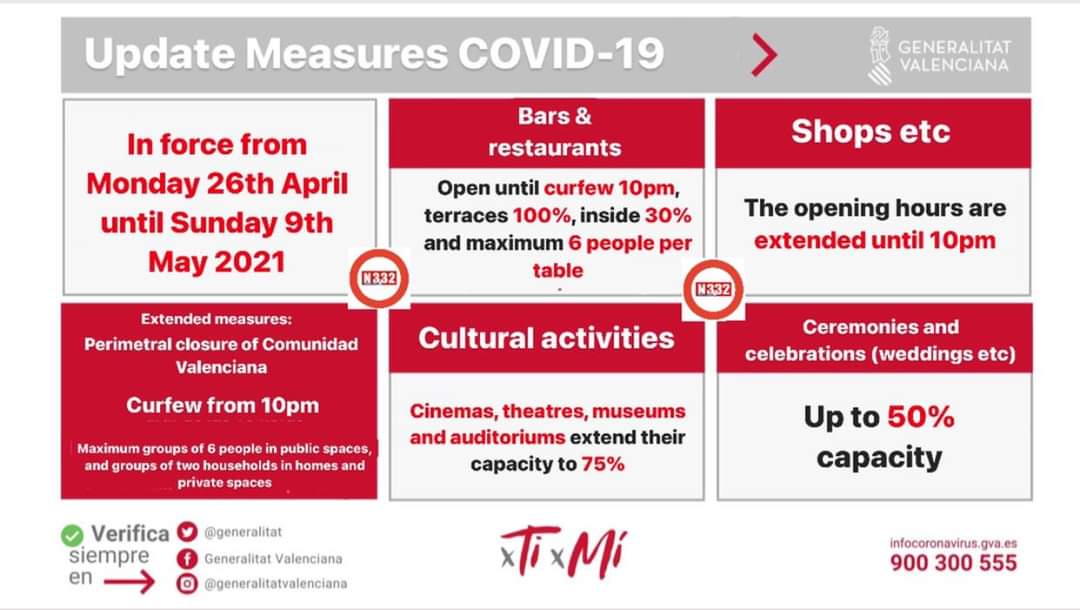 “We have done the hard work,” said the head of the Consell in a form of congratulations to the Valencians “for their effort” because, he said, “all measures have consequences.”

“But the pandemic is not over, it will only be when a high percentage of the population is vaccinated,” said Puig, insisting on the importance of the continued program. He did not give a percentage, nor did he mention the 70% that people talk of in achieving herd immunity, but he did speak of having all those over 60 years of age vaccinated by June.

The progress of the vaccination program is where our hopes lie for “the summer that we Valencians want, as normal as possible” for which he also asked assistance from European Union in both guaranteeing mobility and with the financing of diagnostic tests such as PCR that are required for entry into EU countries.