The Orihuela City Council presented an administrative contentious appeal before the Valencian Community Superior Court of Justice last week, against the Provincial Coastal Service, for their rejection, by virtue of their administrative silence, of their failure to authorise the restitution of the La Glea beach road, following which the court has admitted the appeal for processing.

The floods that we saw during DANA in September 2019 gushed through the, usually dry, bed of the Rio Nacimiento, destroying the section of road that crosses its natural mouth at La Glea beach. Storm Gloria, in January of last year, exacerbated the damage on the road, that connected the coastline of Campoamor with the rest of Orihuela Costa.

Since that time, Avenida de las Adelfas, has been closed, now a year and a half, isolating the residents of this urbanization who are now forced to make a detour of about three kilometres to go the supermarket, go to the pharmacy or the health centre, which are all located in one of the divided sectors.

According to the refusal issued by Costas in October, the section, of about 100 metres, that crosses the mouth of the Rio Nacimiento, may only be repaired as a pedestrian walkway, with removable slabs, linking both sides of the river mouth, but not to road traffic.

According to its surveyors, laying paving “is considered detrimental” which, they point out, is floodable, concluding that the destruction suffered requires the reconstruction of the entire section of the missing road on the sand of the beach, which, according to the resolution, is contrary to current regulations. 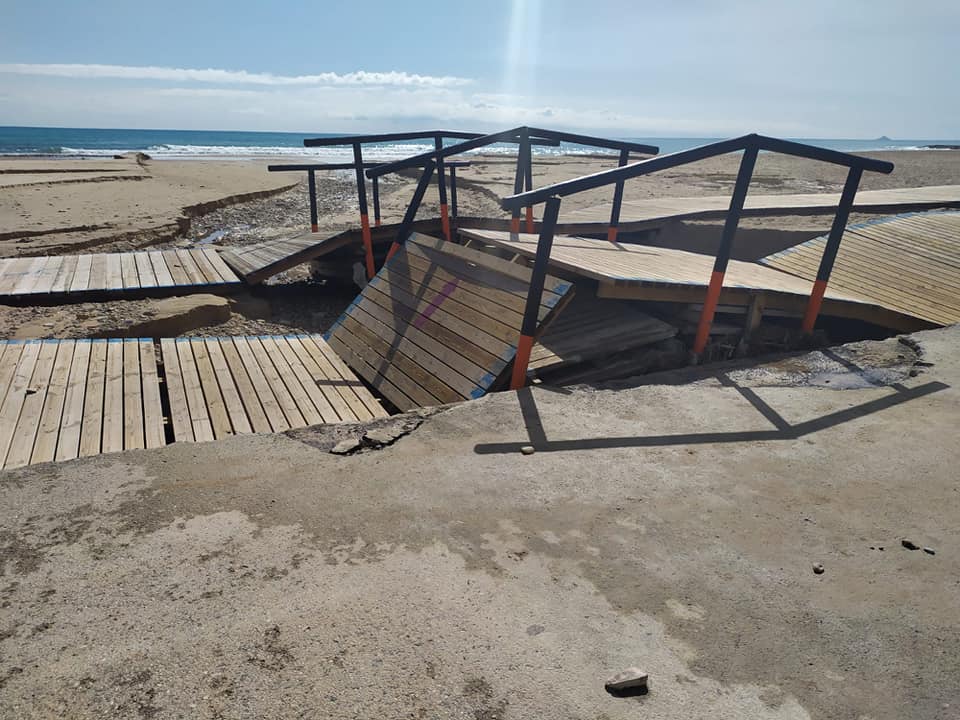 The Council requested in that the resolution be rescinded, based on the special urban planning of the “Campoamor Residential Complex”, approved by government decree in 1969. This planning is prior to the demarcation of the Coasts in that area and was declared of public interest, which is why the municipal council considers that the road and the stretch of promenade should be replaced.

Works carried out to ease the situation pending it’s resolution in the courts saw the Council replace the promenade and the section of the road right up to the riverbed at a cost of 72,003 euros. The work also included a detour in the northern part of Avenida de las Adelfas, so that cars can move between the two sectors, but this is regularly flooded, so the council itself recognises that it does not meet road safety conditions.

Along the section of the mouth of the promenade it has laid wooden walkways for pedestrians but these were washed away by recent rains. However, in view of the refusal of the Provincial Coastal Service to effect the necessary repairs, the only solution, for now, is to replace them once again.