The LeaderPutting YOU at the Heart of the Community
Sign in / Join
Subscribe
Home Sport Darts Wade plants D3 to take Ladbrokes UK Open Darts title. 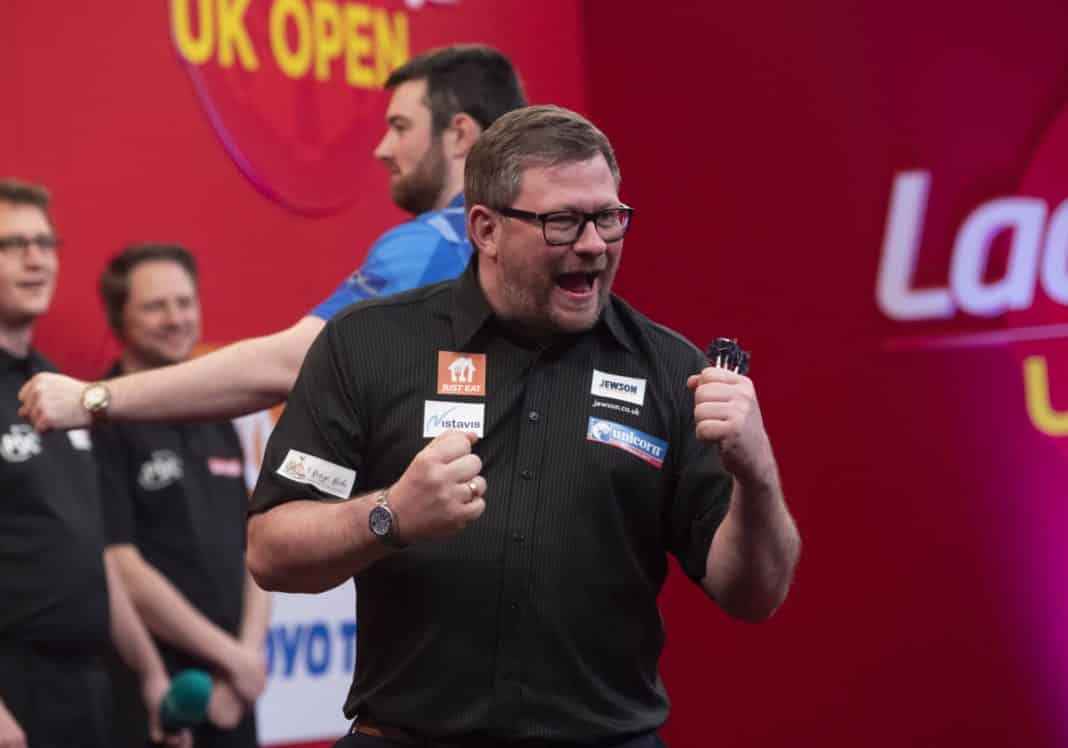 Considering the semi-finals involved the World’s no. 1 and 2, Gerwyn Price and Michael van Gerwen, it would be fair to assume they would contest the final. Not so! Two outstanding performances from the enigmatic James Wade and the relative newcomer Luke Humphries, in their respective routs of Price and MvG, gave Ladbrokes an unexpected pay day.

Wade comfortably won his third Open and 100k pocket money, proving he can still mix it with the best. As often happens, Humphries couldn’t reproduce the form when destroying MvG in the semi just minutes earlier.

Wade raced to a 4-1 lead at the break, a session that included a 180 and 130 from the champion elect. The 26-year-old replied with 3 x 180, but the fluency exhibited earlier was missing, probably nerves, it was his 1st major.

Wade won the 2nd session 3-2 for an overall 7-3 advantage. The same score was repeated in the 3rd, Wade now benefitting a 10-5 lead, requiring one leg in the best of 21 match. Humphries failed to capitalise with throw in the next leaving Wade to plant an unlikely D3 to take the title.

**   An omen? Rob Cross has featured 6 times in the Open, losing each time to the eventual winner.

**   Two 9 darters on the opening day from Sebastian Bialecki and Jitse van der Wal. Even if you tried, 2 names to remember???

Earlier in the week I was chatting with former World Champion Phil Taylor who kindly shared this photo with me, when receiving his Covid jab at the JCB factory, Cheadle recently, currently utilised by the NHS for vaccination purposes. On close inspection, you will notice the nurses are attempting to pacify him, with his own darts prior to the real thing.

Suffering merely with a sore arm, from the Astra Zeneca jab, the former World Champ confirmed in a lengthy call, he will not be following Barny out of retirement, as quality family time is far more enjoyable. He is however practising at present, as a ” Celebrity Bullseye” is being filmed in April, “The Power” wishing to be at his best.

During our conversation, the subject of his moniker came up, “The Power”, where did it come from? The WDC, as it was then known, had a three year contract with Sky television, negotiated soon after the Pro player split in the early 90’s and Peter Judge, Skys’ floor manager, felt all players should have walk on music and a nickname. Some already had, ie Eric Bristow (Crafty Cockney) and Bob Anderson (Limestone Cowboy). Phil was without.

Judge chose Snap’s ‘The Power’, as his walk on music, subsequently adopting the title.

Pro players practise regime can vary quite widely, many prefer if possible a like minded pro and simulate a competition format, say best of 19 legs, 501, repeating the schedule, time permitting.

Some, due to lack of quality sparring partners, practise on their own. Eric Bristow often practised with Phil at the latters pub ” The Cricketers” in Maybank, Newcastle under Lyme. They would regularly play a best of 11 set (best of 5) format. Phil would regularly beat the Crafty Cockney, which never went down well with the Londoner, but what really irked him,. was the fact Phil would sometimes wear his carpet slippers, when doing so.

The Powers’ regular World travel for both competition and promotion, was often his only time on the board, jet lag a constant problem. Sessions would be confined to an hour daily. These however would be intense, scoring, set up shots and the Bull. Doubles normally ignored, his theory, if you can regularly hit a treble of choice, then nailing a target twice the size is a formality.

Earlier practise did involve a white cotton thread suspended through the centre of the 20 and 3 segment. The discipline to encourage centre segment accuracy and avoid wayward arrows. Following any session on the board, an hours sleep would be a prerequisite to rest his eyes.

l asked Phil, did he think Eric was ever resentful of his phenomenal success. “Not at all” was the immediate reply, Bristow had after all been his coach, mentor, and funded his rise to the top. Having known the sometime complex Eric, since he was 14, l knew there would be times The Power was reminded of who got him to the top, Phil still the pupil.

Phil recalled an occasion in a restaurant (probably of lndian cuisine) when his pal, tongue slightly loosened after a Tiger beer or 2, wanted the World to know, but particularly Phil, that he was the better player and definitely more famous.

To illustrate this the Cockney, called over a waitress asking her “Do you know who l am”. After a slow shake of the head, followed by an apologetic “No”, a frustrated but confident Eric then asked “l don’t suppose you know him either” pointing to Phil. Without hesitation came the response “Yes l do, it’s Phil, The Power Taylor”.

Although not quite leading a sedentary lifestyle, Phil enjoys the family with wife Karen, looking after grandchildren, walking and the odd modest bet. Usually the same unsuccessful “5 teams to score”, whilst listening to Smooth radio (he likes Whitney and Manilow).

Pressed on who his preferred 3 dinner guests would be, assuming they would leave prior to his 10-00pm bedtime, his reply, John Wayne, Michael Caine and who else but Eric.

Who is the chairman of the Professional Darts Corporation (P.D.C.)

Answers to simonedelacy@hotmail.co.uk by 18th March