Despite a reduction in traffic, there were still 797 fatal incidents on interurban roads during 2020, in which 870 people have died and another 3,463 required hospital admission, which represents a 21% decrease in the number of accidents and deaths (-213 accidents and – 231 deaths) and a decrease of -22% in seriously injured (-970).

It is the lowest death toll in history and the first time that the number of deaths on interurban roads is less than 1,000, a fact that must be framed in the context of the Coronavirus pandemic that has reduced mobility by 25% and consequently the road accident rate.

The Interior Minister, Fernando Grande-Marlaska, presented the 2020 Road Accident Balance, pointing out that the figures are not a merit of the Government or the drivers, but of the pandemic that has conditioned everything. The Minister stressed, “We are aware of this situation, and in the Road Safety Strategy 2021-2030 in which the General Directorate of Traffic is already working and which will be the roadmap to try to achieve the ambitious objective set by the European Union of reducing by 50% of the deceased and seriously injured in the decade, the reference year will be that of the deceased in 2019, since 2020 is not representative”.

During 2020 there were 321 million long-distance trips, which represents a reduction of 25%, less than the previous year, that is, 106 million fewer movements by road.

This decrease has been greater on weekends (-35.5%) than on weekdays (-20.8%) and in light vehicles (-29.40%) than in heavy vehicles (-2.6%), since the latter have continued to supply the entire population, even during the harshest period of the pandemic.

Since March (included), the deceased have decreased every month except September (+ 1%).

The number of vehicles has increased by 1%, reaching 34.8 million vehicles and the census of drivers has decreased by 0.7, leaving 27.1 million drivers.

Evolution of the decade

670 people died in traffic accidents that took place on conventional roads, 127 less than in 2019. Despite the decline, this type of road continues to be the most dangerous and where the highest number of fatalities are registered (77% of the total deceased).

On high-capacity roads, 200 people have died on motorways, compared to 304 in 2019. The deaths on these roads account for 23% of the total deaths.

It should be noted that during the first state of alarm, 61% of those who died in fatal accidents occurred on road exits (compared to 40% of the average of the last five years between March 15 and June 20).

Through travel, vulnerable users are the ones with the greatest decrease in 2020 with -29% compared to the average decrease of 21% of the deceased. Motorcyclists have reduced their accident rate by -34% with 189 deaths, 97 less than in 2019.

It is also noted that 1 person died travelling in a coach, which confirms the safety of passenger transport in Spain.

During the first state of alarm, trucks of more than 3,500 kg were the only means of transport in which their accident rate increased on the road (18 deaths in 2020, compared to 11 in 2019), and they went from representing 3% of the total of deaths on interurban roads between January 1 and March 14 to 15% during the state of alarm. 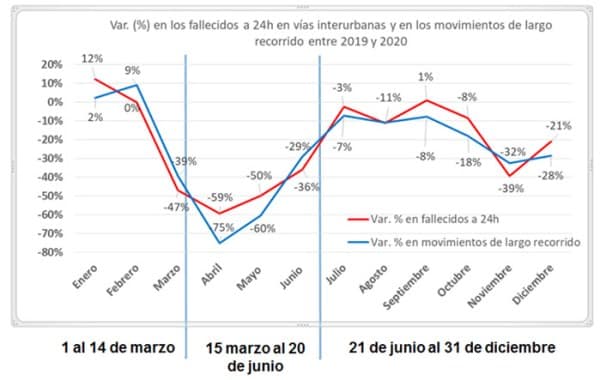 The non-use of seat belts among those who died in cars and vans is increasing. 26% of the deceased did not use a seat belt (125) compared to 22% in 2019. If they had used a seat belt, half of these deceased could have been saved.

In readiness of the entry into force of the application of 30 km / h on the roads of a single lane in each direction in cities on May 11, the DGT has prepared a document with recommendations for municipalities, which also provides answers to the doubts and cases that local administrations have been raising in this regard.

Creation of a working group with the main municipalities to discuss the organization and discipline of personal mobility vehicles in cities, based on accumulated experience. Since January 2, these vehicles are classified as vehicles and their drivers are obliged to comply with the rules like other drivers. In this working group, issues such as the use or not of a helmet, reflective vest, minimum age to drive, will be discussed …

The figures presented are provisional and only refer to fatal accidents that occurred on interurban roads and victims registered up to 24 hours after the accident occurred. Grande-Marlaska has indicated that it will be necessary to wait to have the definitive figures already consolidated in which the victims within 30 days of accidents that occurred on urban and interurban roads will be included to have a complete x-ray of the road accident rate.