This evening the Department of Health of the Valencian Generalitat issued an update of the coronavirus pandemic listing no deaths in the last 24 hours and only one new case.

Another encouraging piece of news is that 75% of all patients have now ben discharged since the start of the pandemic and 1,414 patients in the last seven days. Of the totals, 4,316 in Alicante, 6,248 in Valencia and 1,553 in Castellón.

In the last 24 hours, 127 patients have been discharged and the Valencian Community has new healed 12,122.

In this Saturday’s update by the Generalitat Valenciana, there have been three positive cases through PCR in the last 24 hours, one in the province of Alicante, one in Castellón and the other in Valencia. As for total numbers through PCR, the Valencian Community has accumulated 11,207, 3,919 in Alicante, 5,729 in Valencia and 1,552 in Castellón.

The number of discharges of health professionals is 2,198 and the total number of positives in medical staff at the moment is 515.

As of today there are still 76 positive cases in care homes, 8 in the province of Castellón, 31 in Alicante and 37 in Valencia). However, there have been no new positives today, neither in residents nor amongst staff. 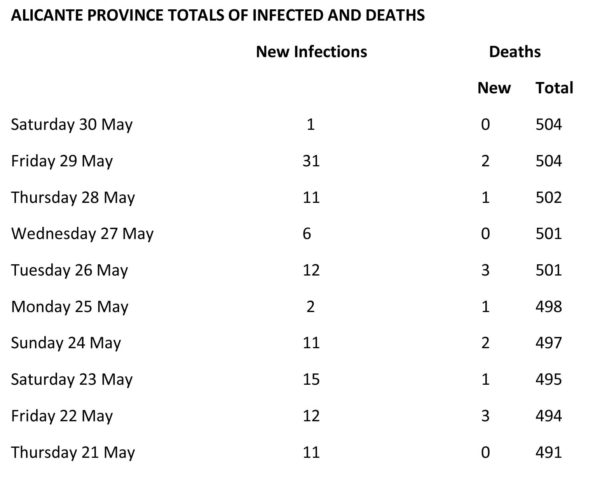 The figures nationally were not so good with 271 new coronavirus infections detected on Saturday. This is the highest figure seen since the notification system was changed.The last two days have seen the same figure come in at below 200.

The two regions that reported the most cases were Madrid, with 95, and Catalonia, with 88. In the latter region, the health authorities have raised the alarm due to a new outbreak that has required dozens of people to isolate, and has even prevented the healthcare zone of Lleida from moving to Phase 2 of the government’s coronavirus de escalation plan.