On the day when many cafes and bars reopened for business in the provincial capital, after two months of lockdown, a further 21 cases of coronavirus have been diagnosed in the Valencian Community through PCR tests, while there have been 4 new deaths, all of them patients in nursing homes, and one of them from the province of Alicante.

With the number of new cases, the number of cases detected in the community since the beginning of the health crisis has risen to 10,914, to which a further 3,810 should be added having been detected by rapid tests.

Of the 21 new confirmed cases, 8 are in the province of Alicante (representing a total of 3,802 since the start of the crisis) 13 in the province of Valencia (a total of 5,622). In Castellón, no cases have been detected, so the overall number remains the same as Sunday: 1,486 cases.

The new figures were confirmed this Monday by the Ministry of Health.

In the last 24 hours there have been 63 patients discharged, a figure that triples the number of new cases detected. “With these new discharges the number of people who have now overcome the disease rises to 9,970: 1,368 in Castellón, 3,662 in Alicante and 4,940 people in the province of Valencia.

The number of discharges of previously infected medical staff is 2,027 while the total number of cases being treated at the moment is 658. 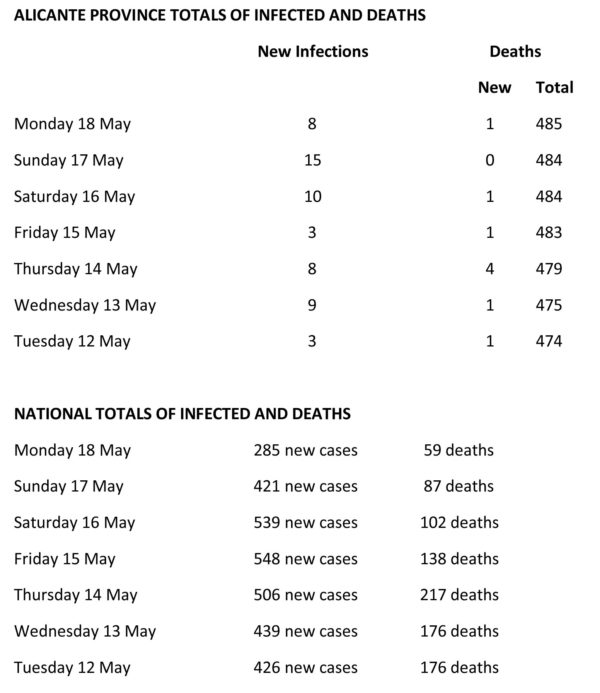 Spain has added a further 59 deaths from Covid-19 this Monday, the lowest number of deaths since March 16, when only 22 were reported, according to the latest data published by the Ministry of Health. Thus, the number of people who have now passed away from the coronavirus numbers 27,709 since the start of the pandemic.

In addition, the number new cases confirmed by PCR also continues to drop, with 285 this Monday compared to 421 yesterday. This represents the lowest figure since May 11 (373), standing at levels prior to the explosion of the pandemic in Spain.

The data also shows that in the last 24 hours there have been 172 hospitalisations (125,233 since the start of the pandemic) and 15 new admissions into Intensive Care Units (11,437). Health has not reported this Monday the number of people who have recovered.

Of the 285 cases today, eight have been registered in Andalusia, 25 in Aragon, three in Asturias, two in the Balearic Islands, five in the Canary Islands, three in Cantabria, 30 in Castilla-La Mancha, 42 in Castilla y León, 85 in Catalonia , 21 in the Valencian Community, one in Extremadura, five in Galicia, five in Madrid, five in Murcia, 30 in Navarra and 15 in the Basque Country. La Rioja, Ceuta and Melilla are the only autonomous regions without new cases.

Of the 172 cases that have required hospitalisation, four are located in Andalusia, four in Aragon, 17 in Asturias, three in the Canary Islands, two in Cantabria, 12 in Castilla-La Mancha, 27 in Castilla y León, 21 in Catalonia , 15 in the Valencian Community, eight in Galicia, 56 in Madrid, two in Murcia and one in the Basque Country.

The marijuana plantation was located in an industrial building...