The number of new cases also registered a decrease: 421 in the last 24 hours. Hospitalisations rise, though, to 327

Prime Minister, Pedro Sánchez, has told regional leaders this morning that the number of deaths from coronavirus in Spain in the last 24 hours has fallen to 87.

This is the first time that the number has dropped to under a hundred in two months.

Since the state of alarm was introduced, there has only been one day with fewer deaths: on 16 March.

The day the state of alarm was decreed, there were 152 deaths due to coronaviruses throughout Spain. After dropping to 21 deaths over the next 24 hours, the number continued to rise. The day with the most deaths was Thursday, April 2, with 950 deaths.

Since then, the number has been decreasing progressively, with some upturns, until falling below 100 this Sunday.

New cases in the last 24 hours number 421 (positive confirmed by PCR test), a 0.18% increase. In total, in Spain 231,350 people have now been infected, of which 50,938 are health staff according to data reported to the Centre for Coordination of Health Alerts and Emergencies (CCAES) by the autonomous communities.

Aragon, the Canary Islands, Murcia, Ceuta and Melilla have not registered any deceased in the last 24 hours. 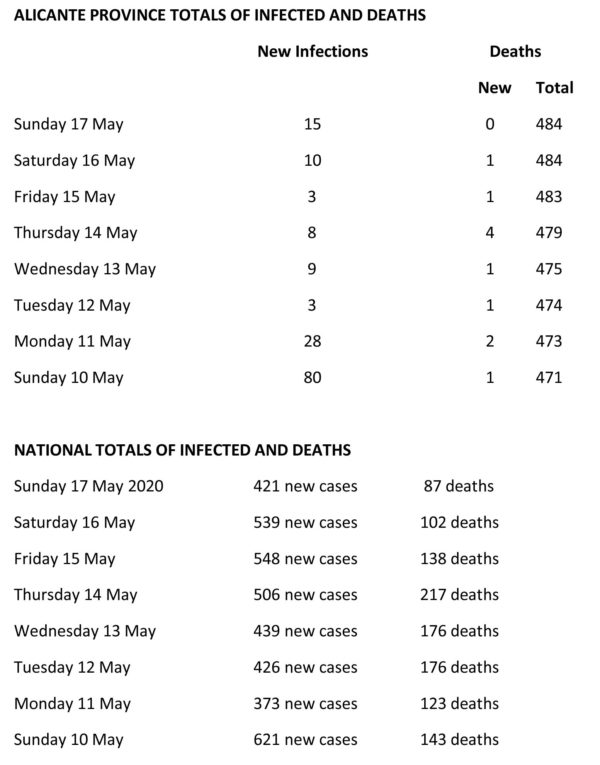 Seven out of ten people who tested positive for coronavirus in the Valecniana Community have ben cured of the disease. During the last 24 hours there have been 146 new discharges of patients diagnosed with coronavirus. Taking the total to 9,907 (1,363 in Castellón, 3,637 in Alicante and 4,907 people in the province of Valencia), now accounting for 70% of all cases.

In addition, nursing homes in the Valencian Community have not registered a single death since the last update, a situation that has not occurred since March 13. Neither have deaths been recorded in the provinces of Valencia and Castellón either.

As for new cases, since the update on Saturday, 43 new cases have been detected through PCR, bringing the total number of positives to 10,893 since the pandemic began.

The number of positives per rapid test is 3,787. Of all the positive cases detected, 3,389 are currently active, representing only 23%.

Since yesterday there have been 3 new deaths (one confirmed by PCR and 2 by epidemiological link), which brings to 1,384 people who have died in the Valencian Community from coronavirus: 207 in the province of Castellón, 484 in Alicante and 693 in the province of Valencia.

Since the last data update, 16 more discharges have been registered amongst health professionals, bringing the discharges to 2,043. The total number of positives in professionals at the moment is 642.

UPDATING THE SITUATION IN RESIDENCES