The Valencian Community has registered a total of 29 new cases of covid-19 confirmed through PCR, in addition to another 209 positive ones detected through rapid tests. There were also a further 9 deaths in the last twenty-four hours, six of whom were residents in care homes.

In addition, there have also been another 218 discharges.

A total of 10,813 infections have now been confirmed by means of PCR tests, while the total number of deaths amounts to 1,373 and discharges to 9,708.

Since Thursday’s, there have been 33 more volunteers of health professionals, bringing the total registrations to 2,001. The total number of positives cases of the virus in professionals at the moment is 681.

The total number of tests carried out for the detection of the coronavirus have been 237,945 of which 156,383 have been through PCR and 81,562 through rapid tests.

Regarding the centres for the elderly, at present there are positive cases in 93 centres (13 in the province of Castellón, 35 in Alicante and 45 in the province of Valencia). 24 new positives have been confirmed among residents and 11 among staff, in addition to the 6 deaths of patients already mentioned.

Health said that hospitalisations for coronavirus in the Valencian Community have decreased by 40% so far this month, in the same way that the number in Intensive Care Units (ICU), have dropped by 44%. 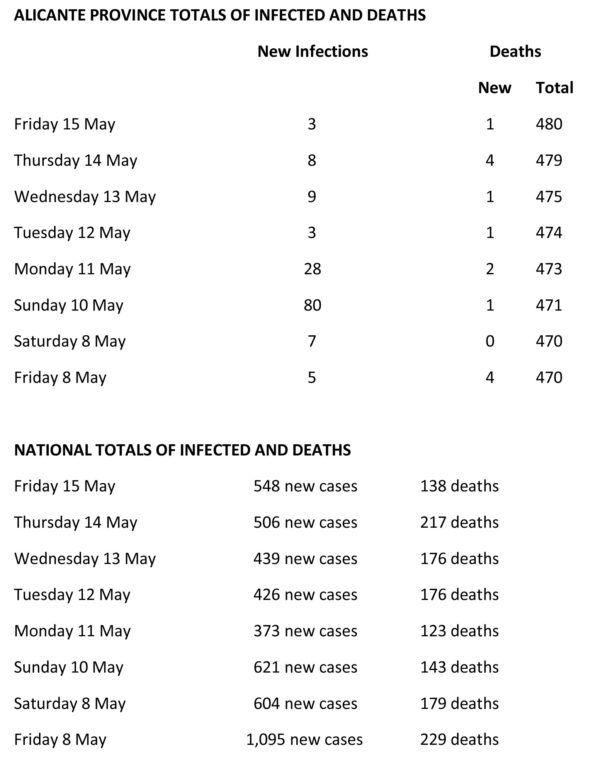 Data from across Spain

In the last 24 hours there have been 138 deaths and 549 new cases across the country, which represents an increase of 0.24%. The Ministry of Health has now recorded 230,183 total cases, as well as 27,459 deaths since the pandemic began in Spain.

The positive fact is that 1,409 new patients have been cured, bringing the number of patients discharged to 144,783.

The director of the Coordination Centre for Health Alerts and Emergencies, Fernando Simón, said in his daily appearance that “we are in the same situation and things are going as expected.”

Catalonia is again the region most affected by the COVID-19 pandemic, registering 151 new infections. Castilla y León follow with 99 positives in the last 24 hours; the Community of Madrid, with 49; and Castilla-La Mancha, with 43.