One person has died in the last 24 hours from coronavirus in the province of Alicante, according to data just released by the Minister of Health, Ana Barceló.

However, in the whole of the Valencian Community, four people have passed away in the last 24 hours, three of them in care home residences. The good news is that those admitted to hospitals and Intensive Care Units continues to drop. In the province there are now just 129 people in hospitals, 35 of them in ICUs.

The number of new cases is 9, a slight increase from yesterday when there were just 3, but well below the figures recorded at the beginning of the week on Sunday and Monday, 80 and 28 respectively.

The number of fatalities is the highest for three weeks, but the number of hospitalised has fallen to 35, of which 12 were admitted to the ICU

The coronavirus epidemic yesterday left a black balance in the Region, with three deaths in a single day, a figure that had not been seen since April 21, according to reports from the Ministry of Health Epidemiology service.

Since the beginning of the epidemic, 142 people have died from Covid-19 in the Region. In addition, there was a slight rebound in cases, with eight new PCR positives, which contrasts with Monday, when none were recorded. 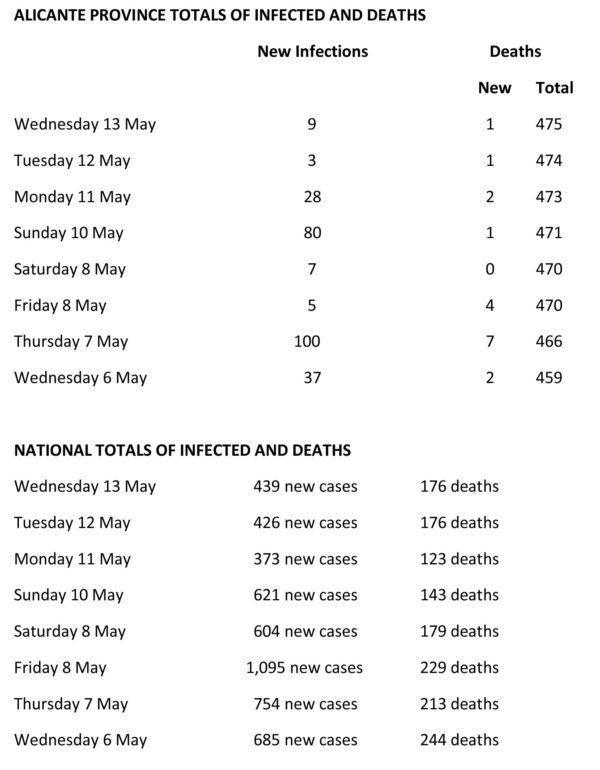 According to the latest data published by the Ministry of Health a further 184 deaths from Covid-19 have been announced this Wednesday, which is a slight increase from yesterday, when 176 deaths were reported. Since the start of the pandemic, 27,104 people have now died.

There have been a further 439 confirmed cases, again a very slight increase compared to Tuesday, when there were 426 new cases. The number of people who have now been affected is 228,691.

There have also been 412 new hospital admissions, of which 65 have been to intensive care.

The director of the Centre for Coordination of Health Alerts and Emergencies (CCAES), Fernando Simón, said of the data on Wednesday “there is not much variation with respect to recent days.” He said that he hoped the number of deaths per day will continue to be below 200 in the coming days “if there are no changes due to misuse of the new mobility conditions.”

Deaths in the last 24 hours, there have been six deaths in Andalusia, one in Aragon, three in Asturias, five in the Balearic Islands, two in Cantabria, 24 in Castilla-La Mancha, five in Castilla y León, 71 in Catalonia, 5 in the Valencian Community, two in Extremadura, two in Galicia, 40 in Madrid, three in Murcia, one in Navarra, 13 in the Basque Country and one in La Rioja.

Regarding ICU admissions, five are in Andalusia, one in Aragon, one in Asturias, two in the Balearic Islands, three in Castilla-La Mancha, 39 in Catalonia, one in Galicia, twelve in Madrid and one in the Basque Country.

Of the 412 new admissions to hospitals, thirteen are in Andalusia, eight in Aragon, 27 in Asturias, five in the Balearic Islands, two in Cantabria, 23 in Castilla-La Mancha, 24 in Castilla y León, 129 in Catalonia, 10 in the Valencian Community, 17 in Extremadura, 121 in Madrid, one in Murcia, three in Navarra, 26 in the Basque Country and three in La Rioja.