For the second consecutive day, the province of Alicante has registered only one death due to coronavirus, which brings the total deaths of the disease to 434 since this health crisis began.

According to the update of data provided this morning by the Department of Health, there have now been a total of 6,317 discharges in the Valencian Community (74 since Sunday): 777 in the province of Castellón, 2,391 in that of Alicante and 3,149 in the province of Valencia.

Since last Monday, there have been a total of 1,688 discharges, representing an increase of 36.5%. In addition, the number of people who have already overcome the disease in the Valencian Community represents more than 55% of all positive cases.

On the other hand there have been 40 new positive cases, the same figure that was registered on March 14 and the lowest since March 17, bringing the total of positive cases to 11,412, of which they are 3,901 active, which represents around 34% of all positives since the start of the pandemic. Of the total, 763 are admitted in hospital and 149 of them in the ICU.

Of the 40 new positive cases, 5 are in the province of Castellón, 11 in Alicante and 24 in Valencia.

To date there have been a total of 1,194 deaths in the Valencian Community: 178 in the province of Castellón, 434 in Alicante and 582 in Valencia.

“The evolution is clearly downward and that gives us hope,” said Fernando Simón, director of the Centre for Health Alerts, in his daily appearance.

The hardest hit communities continue to be Madrid and Catalonia, with Castilla y León ranking third,  while the least affected are Ceuta, Melilla and the Region of Murcia.

Meanwhile the In addition, today, the seroprevalence study gets underway today in 36,000 homes to find out the real dimension of the COVID-19 epidemic in Spain. 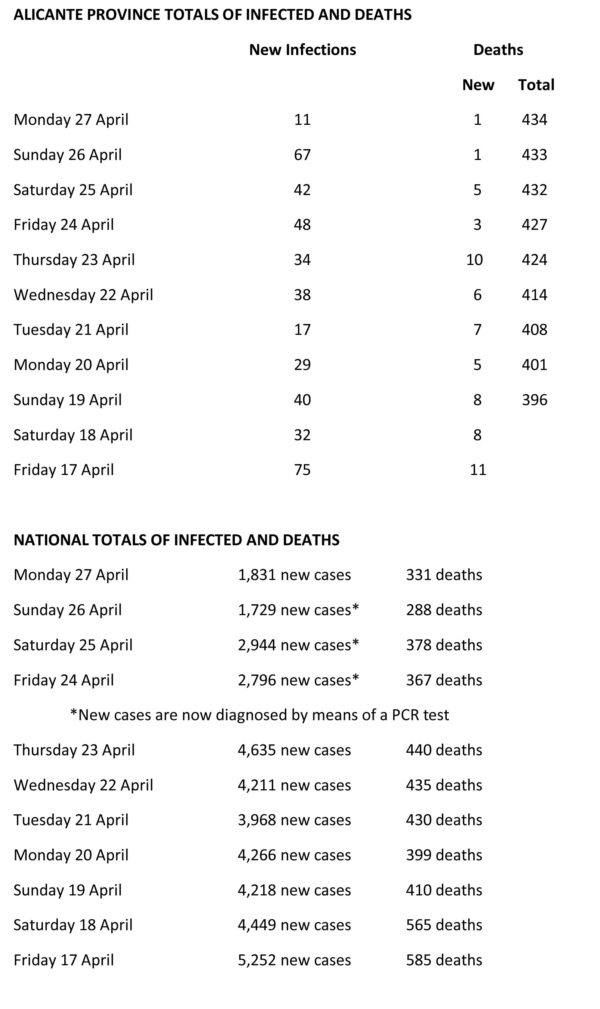