Barely needing to get out of second gear, CD Montesinos chalked up their 18th victory so far in this campaign as they continue to look down on the chasing pack.

Their opposition, Formentera, provided a stiff test when they clashed last year, but today’s Monte side are a much different proposition.

Playing with an assertive zip and impetus, after a cagey start, the Reds quickly stamped their authority on the game, their opponents barely had time to create anything let alone meaningful progress towards goal. In a whirlwind of vigorous attacking play, goals from hit man GONZALO (22) and the improved MANU SANCHEZ (9) saw them firmly in control. Central defender MORANTE (2) pitched in too, prodding home a loose ball from a corner and GONZALO (22) with his second, after a glorious cross from the energetic PAMIES (14) made it an opportunity too easy to miss.

At the break Monte were on course for the win with their hand firmly on the tiller. 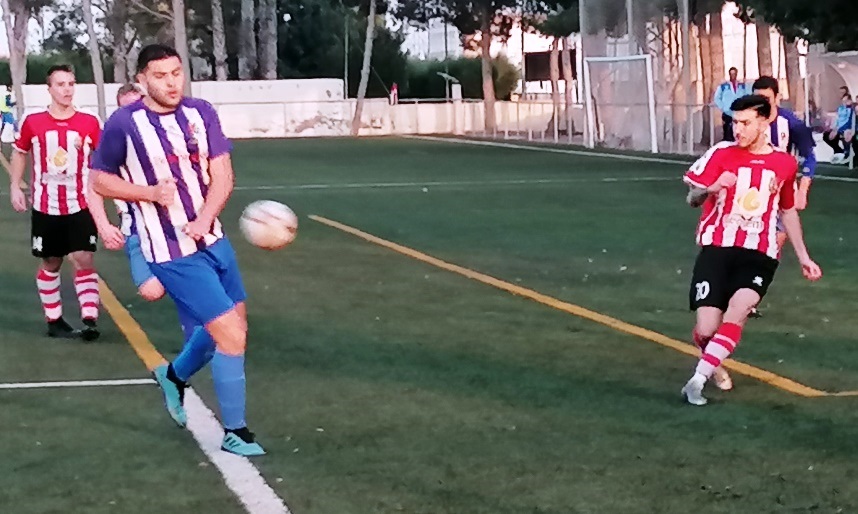 In an attempt to make a game of it, Formentera made changes in the second, moving a defender up to plug the leaks that were too easily exploited by Monte in the first half. This made for a tighter, less fluid, game, but the home side were still comfortably the dominant force.

A comical (on this day at least) mix-up at the back between two defenders and goalie, saw the Formentera number 17 get scant reward for his efforts, rolling home the loose ball to pull one back. But this was no real fight back and a few minutes later GONZALO (22) scored his hat-trick from the spot after a clear penalty shout.

Formentera continued to try and disrupt the Montesinos supply lines to the front and despite a plethora of substitutions (including new boy CRISTIAN (23) making his debut from the junior squad) a further goal from substitute GERMAN (8), set up by MANU SANCHEZ (9) rounded off the scoring, for the day.

Special mentions have to go to ADRIAN (6), who improves with each game and DAMIEN (20), who seemed, at times, to be everywhere on the pitch.

Kudos to Formentera, another decent, honest footballing side, for making a fist of it, but, in the final analysis, Monte have quality all over the pitch and when they play at their best it’s increasingly hard to see who could stop them in their quest for ultimate glory. Vamos Monte.

Man of the Match was GONZALO, selected by Derek Brearley, Graham Burge, and Bryan Jones.