The Tiaras faced down the mighty El Capitan and clocked up an impressive number of steps on their FitBits whilst going back and forth to the bar.  The lads almost succumbed to a 1-0 deficit in the first triples when the ladies got the first chance at the finish on D7, thanks in part to Pat Schofield’s 100, but alas narrowly missing out for the single point that they were striving for.

A wake-up call for the Capitanos, they quickly despensed with the ladies all the way until the Lithuanian stew arrived.  I don’t know the recipe but it sure does the trick for the homeside as not a drop was left when they opened up for the singles.  Tiara Wendy Hayward  (117) gave good account of herself but Shane – minus the hat this week- Dennis (119) took the lads to an unasailable win.

General Vycka Bobinas didn’t give Sharon Marshall a look-in but the formidible Pat Schofield (134) showed true spirit against grandad Eddie Klimonis (2 x 100) so nearly getting a chance for a shot-out in the 2nd leg. Ginge Lewis looked positively rattled as he lost the first leg to Simone de Lacy (D1) and despite a 133 in the 2nd leg, she didn’t seize her chance at a victory when getting herself first to the finnish in the 2nd leg.

Lewis then found his form with a string of ton pluses and much relief, secured the win in the 3rd leg.  Lesley Eagles was just wearing too many socks and repeatedly troubled the outer wire of the D20 whilst opponent Nigel Justice clocked up his 2nd 180 in 2 weeks and a 2-0 win for the penaltimate singles.

Lisa Ivill’s diminutive 60 inch frame was comical compared to lofty Lithuanian Aroldas’s 80 incher but she put up a good fight with a 106 but Klimonis Junior’s (121, 100) put him in sight of the check-out long before she could save face for the Tiaras. 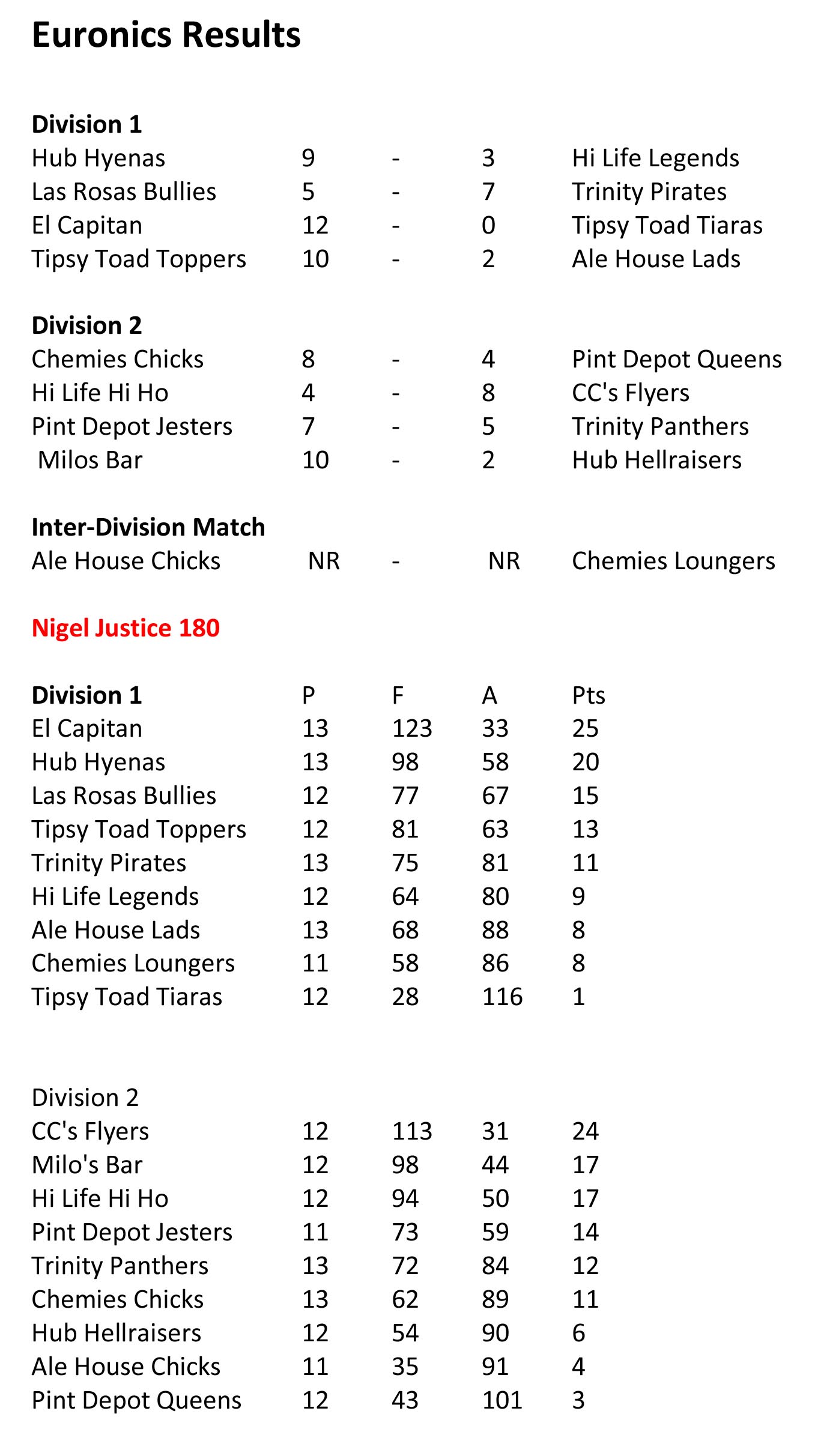 The Toppers were in full fighting form, with all their big guns in the battery for the first time this season.  It shot to 6 – 0, mainly due to fancy finishing rather than super scoring, Graham Solomons leading the way with 68 finish (16-20-D16) in the first triples, setting the bar for the rest of the Topper gunners.

Only 3 x 100’s from the Ale House Lads lead any resistance, thanks mainly to Karl Mallinson and Alan Havelock.  The Latter continued his good form, taking the scalp of Graham Solomons in a closely fought game in the singles.  Despite Solomons 4 tons, ALan took the leg 2-1 in  what was probably the best match, giving him MOTM. The return of the Rutter, steadied the the ship beating the balletic Andre Wing with scores including 140 and 155 and securing him the MOTM for the Toppers.

There were good wins too for Lee Maiden and Andy Gildea (139. 121), taking the score to a crushing 9-1. The last two legs saw a drop in quality, firstly  from the beleagered Jimmy Gray who recently fell into an uncovered buggy service pit, dislocating his shoulder and Phil de Lacy with a trapped nerve and unrelenting pins and needles in his right hand.  The two fought bravely, swapping tales of woe but the dislocated shoulder won out D7, D9.

No injuries to blame, Paul Miller eventually saw off Glen Richardson in a marathon final leg with Miller wearing a hole around the D7 area and eventually switch to 10-D2 for the final nail in the coffin.  Tipsy Topper Hugh Galloway brought the entire Galloway clan along to support the home side and regretably didn’t get a singles game on his birthday of all days!

Not the best of darts for both Hyenas and the visiting Legends, both a little lack lustre in the scoring department,the Legends also missing vital doubles. The hosts took full advantage, taking all three triples by way of Simon Williams D6, Paul Durrant a 74 game shot and Bob Taylor D20. A lone three figure score from John Crabbe, plus a 97 from Roger Phipps, together with a ton from John Eyre and a 121 from Gareth Bevan were the highlights from the opening legs.

The match continued in a similar fashion, the Hub increasing their lead by taking all three pairs, Williams managing a 45 out, the highest of his career, in the first against the visiting Crabbes ( John and Sandra ). Les Adams and Ralph Christie coming to life in the second with numerous 90+’s, opponents Durrant and Eyre just keeping up, the latter hitting 123 and an 88 out ( T16, D20 ) for 5-0. Bob Taylor continued his fine form recording 96, 140, but it was partner Miller who closed out on D16.

For a change fish and chips preceeded the singles and very tasty they were i’m told. Phipps should have taken the first leg singles against Durrant, who pinched the opener on D15. Both players upped their game in the next the Legend hitting 2×100, Durrant 100, 125, 135 and D8 for 7-0.

Adams, despite 5×80+ scores and a 140 and a first leg D10, couldn’t press home the advantage, but all credit to Hyena Bevan, now finding some of his old form, who stuck in there with a ton and 5×80+’s finally nailing D8 for the game.

Sandra Crabbe ignored Taylors 3×100 in the next closing out on D2,D3, for a fine scalp, Taylor unable to reply. Sue Christie added a second for the Legends with 117, 133 and both doubles against Eyre, 100, 140, 98. Two excellent victories! Ralph Christies usual form went walkabouts on him in his encounter with Miller who was in fine fettle with 4×100 and two winning doubles. Final match featured Sandras other half John, who completely outscored Williams, completing the third leg on D16 after 2×100 and 140. MOTM for Legends Sandra Crabbe.

Although looking comfortable win, the Chicks from Chemies victory over the Queens was far from it. lt wasn’t until the decisive eleventh leg that the Chicks put this one to bed, through a D1 from the captain Winnie Mackay, taking the score to 7-4. The hosts won all three triples via Mackay, Hennie Oortwijn and Sue Collins, before the deficit was reduced by Rachel Broadhead on D9. Two more victories came through Oortwijn 102, D4 and Maria Ross D18, giving the Chicks a commanding 5-1 lead, at the break.

Queens Lorraine Cox D4 and Marie Cummins D5 closed the gap to just two. No stopping Oortwijn who claimed her third double of the night D3, to earn a point for the Chicks and a MOTM award. Broadhead gave the Queens a glimmer by taking the tenth on D4 earning herself a MOTM. Mackay and Collins gained both points for Chemies in the final two games.

Former pro darts player and publican Nigel Justice, falls under the Spotlight this week. The El Capitan star now residing in Spain for the past eighteen months, enjoys his darts in the Euronics league after a hectic ten years on the pro circuit.

Amazingly his pro darts career came after a nightmare accident to his hand, whilst using an industrial circular saw in 1996. Nigel was unable to play for two years, but quickly got back into his stride performing in the USA, Canada and Europe, culminating in reaching the last sixteen at the PDC World championship when at the Circus Tavern, West Thurrock, Essex, losing to Phil Taylor.

Nigel’s looking forward to sharing ruby wedding celebrations this November with wife Lesley, sons Lee, Darren and Carl, along with five grandchidren, the only girl in the family Tillie Rose. Now semi retired, the armchair sports fan enjoys the exploits of Manchester United whilst savouring the delights of a can or three of Strongbow.

An ideal evening for the sharpshooter, would be a medium rare fillet steak at his favourite restaurant, followed by a lenghthy walk home and a couple of hours relaxing watching the Goodfellows again.