“What better way to get to know the Pitiusa Island, other than with this 3-stage race,” Ana Belen Juarez Pastor told The Leader. 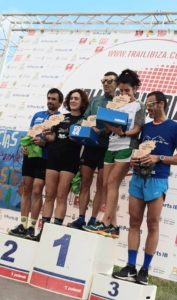 “The first stage was the 10km night stage in San Antonio. Stage two, 85 km San Antonio – San José, and stage three, 10 Km in the Necropolis of Ibiza, a World Heritage Site,” said Ana, who recorded a total time of 16h 18 in her category.

“I was surprised at the amount of Sierra that the island has – the beauty of its coves – as well as the turquoise blue of its waters,” said Ana.

“The last stage had the departure of the women separately, before the rest of the participants, a gesture that makes women visible in sport,” said Ana.

The 2019 race raised funds for FibrosisQuistica, for research and treatment.

Ana, accompanied by Paco, Jose Alfredo and friend Mariajo, on her return to mountain races carreras, said: “Thanks to my partner Francisco López Granero and to my trainer Alex González – you can’t have better sports consultants. Now, I look forward to the new challenges in 2020.”