So I got it wrong in still believing, up to 11pm last night that the 2017 result would be essentially replicated. But I still believe, as the Prime Minister said, that many voters would have had quivering hands as they cast their ballot.

The Conservatives won principally because of a) the wish to “get Brexit done” b) distrust/dislike of Jeremy Corbyn and c) the perceived “blokeiness” of Boris Johnson appealing to many traditional Labour supporters. The Brexit party played their part in siphoning off Labour votes where the voter could not, in all conscience, vote Conservative. That said, there are a few constituencies where the Brexit party probably prevented a Conservative win.

Voting patterns also underlined the argument that England is now a political divide. Away from the Labour heartlands, the swing away from Labour was much lower than where the most dramatic results were recorded. Additionally, the LibDems increased their vote but could not increase their tally of MPs (and lost their leader but, of course, in Scotland).

Whilst the SNP made significant gains, the possibility of a second independence referendum is not necessarily any closer as the Prime Minister is highly unlikely to agree. But, short term, the SNP will be the only coherent opposition given the extent of the Labour debacle. In the same way, there will be increasing calls for the unification of Ireland. 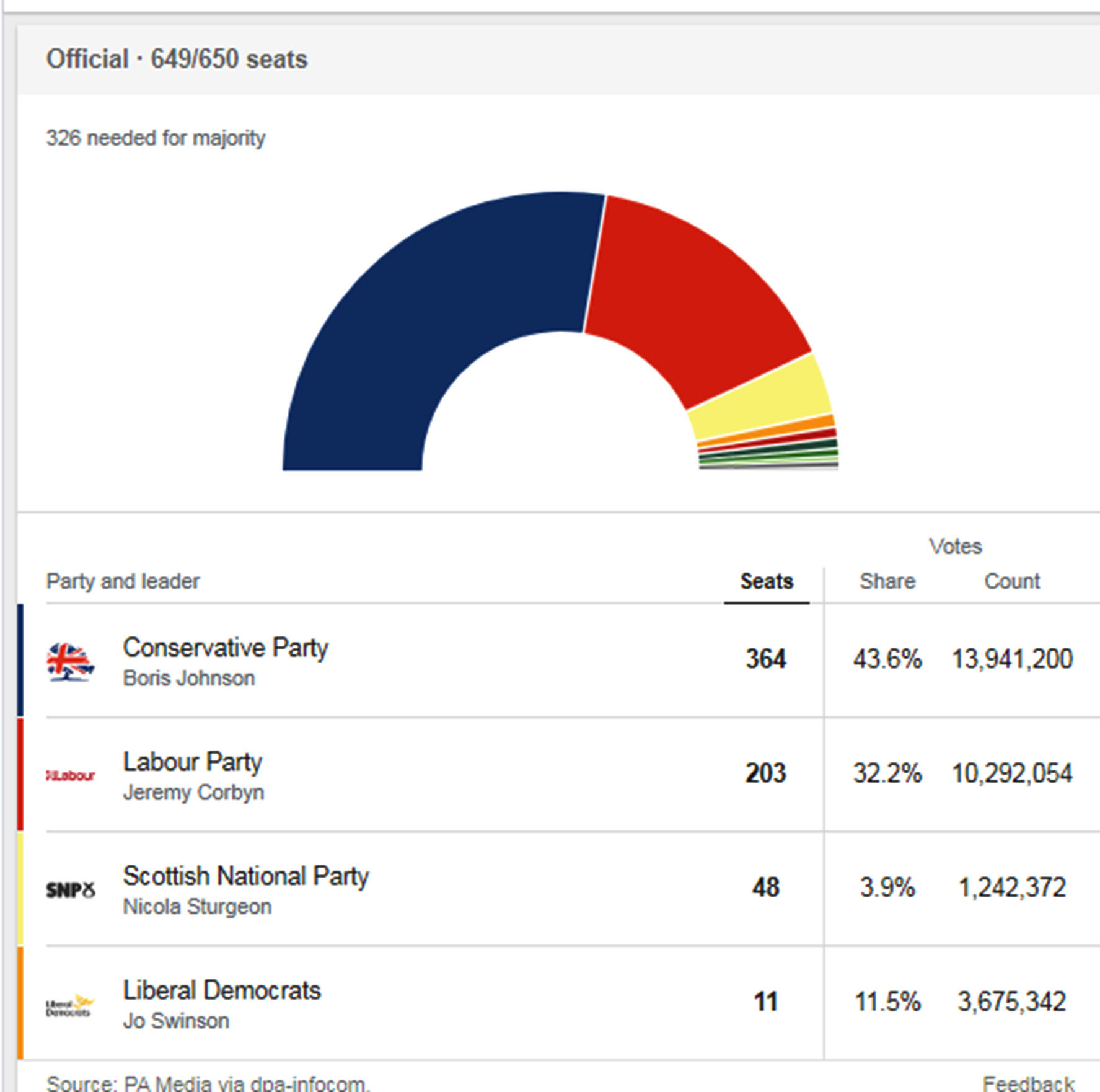 The Conservative manifesto was short on detail other than “getting Brexit done”, firstly by concluding the withdrawal by 31 January. Whilst the Prime Minister has spoken up agreeing the next part, trade, by the end of 2020, he is not totally beholden to the hard-line Conservative MPs who want a clean break with the EU. The Conservatives (as they habitually do) put on a good show of unity for the election. But they cannot heal the wounds of the last (forty) three years overnight – if ever.

It is impossible to say at this stage where the balance of the new Conservative Parliamentary Party will lie but it is likely to be right-oriented. This could force an immediate pressure point with its new support in the North and Midlands if seen to be what might be termed new Thatcherism. The Prime Minister is preaching “One Nation Toryism” (and I feel that is where his instincts lie). This may lead to an eventual trade agreement with the EU which, to an extent will be not much different to the current arrangements.

The Brexit Party (or rather Nigel Farage) has spoken of a rebrand as the Reform Party. That could act as a conduit if there is disenchantment with Conservative policies and, at the risk of appearing alarmist, it is likely to have fascist echos. This will be exacerbated by the degree to which Brexit is eventually damaging to the economy and social fabric.

As I said, despite the headlines, the LibDems progressed. They will elect a new leader from a very narrow pool of candidates but their future may be dictated by what happens in the Labour Party.

Whilst Jeremy Corbyn and some of his closest associates will stand down in due course, the issue immediately turns to what his successor will represent. The bulk of party members (and a number of MPs) probably remain committed to the main tenets of the manifesto (overtaking their 1983 manifesto as the longest suicide note in history). They believe that, post-Brexit, the electorate will see their merits -if the media allows them to get their message across.

So in 2024 they could well campaign on the same platform, hoping that disenchantment with the government has set in – with a leader committed to Corbynite proposals. Expect much soul searching and the prospect of MPs departing due to ideological conflicts. Given past experience, the chance of formation of a new party seems slim. The Liberal Democrats initially seem the logical home for the disenchanted, and then a recasting as a social Democratic Party.

I can’t resist mentioning Donald Trump. It is often stated how socially conservative voters in the old “Labour heartlands” are analogous to voters in the US rust belt. They are attracted to nationalist argument and far from receptive to messages on the environment and social issues. The Conservatives (notwithstanding Trump’s tweets of support) will have a hard job representing the interests of their, now, very broad church. And this could keep Nigel Farage in business.