On 9 and 10 August Hondón de las Nieves will hold for the sixth time an original arts and crafts fair. Between twenty and thirty craft people are expected and not only will they show (and sell) what they have made, you can also watch most of them at work, ask questions on techniques, tools and materials, and quite a few speak some English.

There will be people working with leather, wood and paper, people modelling clay, painting or making macramé and jewellery. A blacksmith will set up a complete workshop and show many sculptures he has made and a friendly potter invites everybody to turn their own little bowl on her wheel. All are people who love their work and want you to share the pleasure. 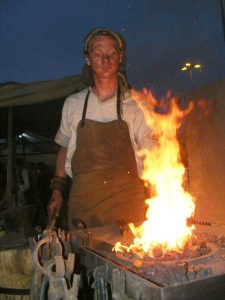 There will also be workshops for children and a few stalls with traditional delicacies: Felipe sells pan de higos, made of dried figs and almonds and will show you how arrop i tallaetes is made, a Valencian speciality made of grape syrup and pieces of pumpkin. Quite a few local people participate in the fair and a group of local youngsters runs a tavern. Two talented jugglers will jump around on stilts, ride on a crazy bike, make jokes with the public and close the fair both evenings with a fire show.

The fair is organised by Amata, the regional craft association that has spent the last 24 years organising the few real craft markets to be found in this part of Spain. It’s not easy to make a living in this fashion, when there is so much competition from people selling mainly imported goods, but it can be done.

That’s why Amata insists on that everything on the stalls has to be made by hand and by the person actually on the stall. And it works: in the years that Amata is organising this fair, it got to be known as the place to go when you are looking for original work and want to buy it directly from the author (and thus for a reasonable price).

This year the fair is held during the fiestas of the Virgen de las Nieves, which are held every other year, because Hondón shares its patron saint with the neighbouring village Aspe. On Saturday, at the end of the fair, the famous Correfocs (literally: Fire run) is held – at midnight a group of people, dressed as devils and other fantastic characters will run, jump and dance around a big float that drives slowly through the streets of the village, while setting off all sorts of fireworks, a spectacular – and above all a noisy – event that attracts hordes of people to the village.

The Craft Fair will be held on quieter moments: it starts on both Friday 9 and Saturday 10 August at 7 pm and stays open till midnight. Hondón de las Nieves lies not far from Elche, Crevillente and Novelda; to get there from further away, take the exit “Aspe” on the A7 (South of Alicante) or A31 (Alicante-Madrid) and in Aspe itself follow the signs for Crevillente and Hondón de las Nieves.

For more information, ring 639 979 678, we even speak English. You can see pretty pictures of previous markets at the Amata web site, for example at http://www.amata.es/Hondon16.html.