SIR Trevor McDonald was headline news on British television for years – literally – being the anchorman for ITV’s News at 10.

“I was Trevor McDonald’s assistant – his ‘Ghofar’ – run, fetch, carry me, during the years of filming the ITV news in London,” said John, who worked behind the scenes as a production assistant.

“I worked on the production side for 20 years – a lifetime – prior to being made redundant, when I headed for Spain,” said John, born in London to Spanish parents.

“The building I worked in had three TV studios – for the midday news, the evening news and News at 10,” said John, who started as a junior assistant producer.

“All the big worldwide news events would be presented on News at 10 – the most important programme I was involved in – news stories were changing by the hour,” said John.

John, 79, said: “It was non stop excitement. Andrew Gardener, Reginald Bosenquet and Trevor McDonald were the most famous newscasters.

“I worked alongside Trevor McDonald towards the end of my career – from being a very unimportant junior production assistant – but very well paid.

“Trevor McDonald – Sir Trevor – was a very nice man. There were many famous big names that came into the studios, including the Royal Family, that included HM The Queen.

“At the time it was never a case of thinking that they were special people. They were the substance of the TV programmes that were made. The viewers loved it.”

“It was his idea to present a programme, for viewers to help in crimes committed, in a hope of helping to catch criminals.

John added: “Since I retired I have travelled throughout Spain, and settled in La Siesta nine years ago, having had no previous fixed abode.

“I lived on a boat for years, moving from one harbour to the next, on the Costa del Sol. Having arrived at Estepona harbour I stayed there for a long time. 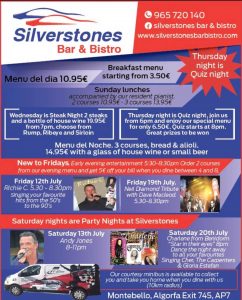 “I sailed from England to Gibraltar, and on to Estepona, where I moored.”

John added: “I have travelled around England many times – now my life is in Spain of which so many places have changed.

“Guardamar, from the place I knew many years ago, is one such place that has changed so much down the years.”

John, still heartbroken, spoke about meeting a lady, who later became his wife, only to be cruelly taken away from him.

“I had the good fortune, good luck in life, to meet a lady, Reka – who I fell in love with – and sailed the seas, from port to port,” said John.

“We travelled to the Baliaric Islands, and eventually arrived in Torrevieja. I was the happiest man alive – up until three years ago when I lost her.

“I lost the woman I loved. I suppose that is life. Reka was a lovely lady, born to a Russian mother. She was a wonderful woman,” said John.

“Reka’s passing was due to a combination of Alzheimer’s, that was so severe the rest of her body couldn’t cope, and she died of a heart attack,” said John.