For holidaymakers staying in the popular resorts along the Costa Blanca and the Costa Calida, Cartagena is a “must visit” location.

Situated very handily on the N332 and at the end of the AP-7 motorway from Alicante, it is just a short drive for many visitors to the area. A very cheap way to travel is to take the regular bus which runs along the N332 from Alicante, picking up at major towns such as Santa Pola, Guardamar, Torrevieja and Pilar de la Horadada.

Once in the city, take a leisurely stroll around the centre and you can feel the history seeping from every wall.

Cartagena is the 2nd largest city in the region of Murcia, it was founded by the Carthaginians in 223 BC. Hannibal used the city as his Iberian capital and named it Quart Hadas, the New City. After conquest by the Romans in 209 BC it was re-named Carthago-Nova or New Carthage.

The Romans, Byzantines and Arabs all took full advantage of Cartagena’s perfect natural harbour, surrounded by mountains that were rich in metallic ores. Today this natural harbour is still the home of the biggest Spanish naval base in the Mediterranean.

With the decline of the Roman Empire the city entered a period about which little is known, until the Visigoths dominated the town. In 555 AD the Byzantine troops of Justinian re­-conquered the city. It was again under Visigoth control around the year 621 AD, and remained so until the Arab conquest of 734 AD.

In 1245 AD Alfonso 10th re-conquered the city and the Arabs were expelled. The 16th century saw a period of great economic and political revival, sadly brought to a close by the widespread epidemics of that era. However, by the 19th century the area was enjoying new wealth due to the mining industry.

Cartagena is a city where history abounds on every street corner, and although the city has had a period of highs and lows, it enters the 21st Century with an immense programme of restoration and recovery of the many historical and archaeological sites of which this ancient city is so rightly proud.

A wonderful way to view this ancient city, firstly from the open deck of a modern double decker bus, then by sea around the harbour. Fully equipped with audio guides in various languages, the bus takes a comprehensive yet leisurely route around the city of Cartagena, both ancient and modern. The round trip takes about thirty minutes but gives the visitor all the hints and information necessary to make a more in depth study on foot. 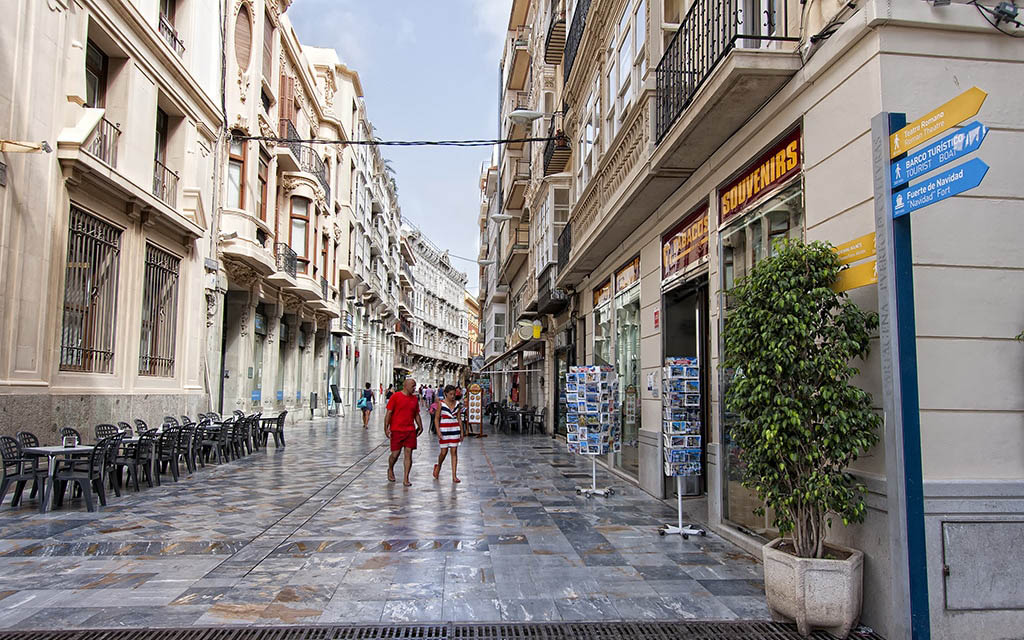 From a position of complete comfort one can see the ancient buildings and old city walls, the archaeological remains from various eras of Cartagena’s past. The bus travels through the historical and the more modern commercial centre of this beautiful city, with busy shops and the many university buildings.

Driving past the splendid marine promenade, recently modernised and restored, you arrive to the landing stage for ‘El Barco’, the twin hulled catamaran that takes the visitor on a trip right around the ancient harbour of Cartagena.

During this trip which takes about an hour, commentary is given in various languages telling a fascinating story, not only about the physical features such as the Navidad Lighthouse and Escombreras Islands, but legends and stories about the many castles and fortresses overlooking the harbour.

One of Spain’s top 3 cultural festivals is taking place this very week, the 2018 Festival of the Carthaginians and Romans which got underway last Friday, 21 September and will run until Sunday, 30 September. During the festival you can see games that show all the heroic events that occurred during the period from about AD 227 to 209 BC.

Still a very important base for the Spanish Navy, there are always various types of warships at their moorings and, if you are lucky, you might see a modern submarine gliding in or out of the harbour. A far cry from the Isaac Peral submarine, which is proudly displayed on the quayside a few hundred metres away.

The journey also shows you the commercial side of the harbour, the very busy container depots, the yacht marinas and the small fishing fleet. All in all a very interesting and worthwhile trip, which gives you a really new impression of the Port of Cartagena as you return to it through the bay.

The area has a rich gastronomy based mainly on fish and seafood but also including the area’s delicious fruit and vegetables.

Also very popular along the surrounding coast is scuba diving – the crystal clear waters are ideal for this modern pursuit and a huge variety of fish can be seen including morays, stonefish and octopus. If you are lucky you may find the remnants of old wooden galleons, many of which foundered off the coast during centuries of wars and conflict.

Modern day Cartagena is undergoing major changes with a huge restoration program and the city is looking forward to renewed wealth and success.

So this is the ancient city of Cartagena on the Costa Calida, Spain, easing itself into the 21st century.

For more information call the Tourist Information office on 968 506 483 or call in the office at Plaza a Bastarreche.