With a number of first team regulars missing, including a couple of long term injuries, CD Montesinos entertained opponents FC Bahia Santa Pola looking to retain that third spot in the group. On a cold blustery and showery day, a crowd around the 200 mark saw the home side take all three points from a game which CD Montesinos should have had sewn up at the break, yet somehow manage to let the visitors back into the game.

The first half saw “Monte” playing their quick, fast flowing football which has been missing in the last few games. Up front the division´s top scorer, Vazquinho, was being a right handful for the Santa Pola defence. But despite all the Montesinos hard work, it was actually Bahia who had the best chance of the game which forced the Monte keeper, Dani, into an excellent double save.

But on the half hour mark, Vazquinho does what he does best. A ball over the top of the defence from Guirao was chested down by the little Brazilian who volleyed the ball into the top corner of the net to open the scoring. 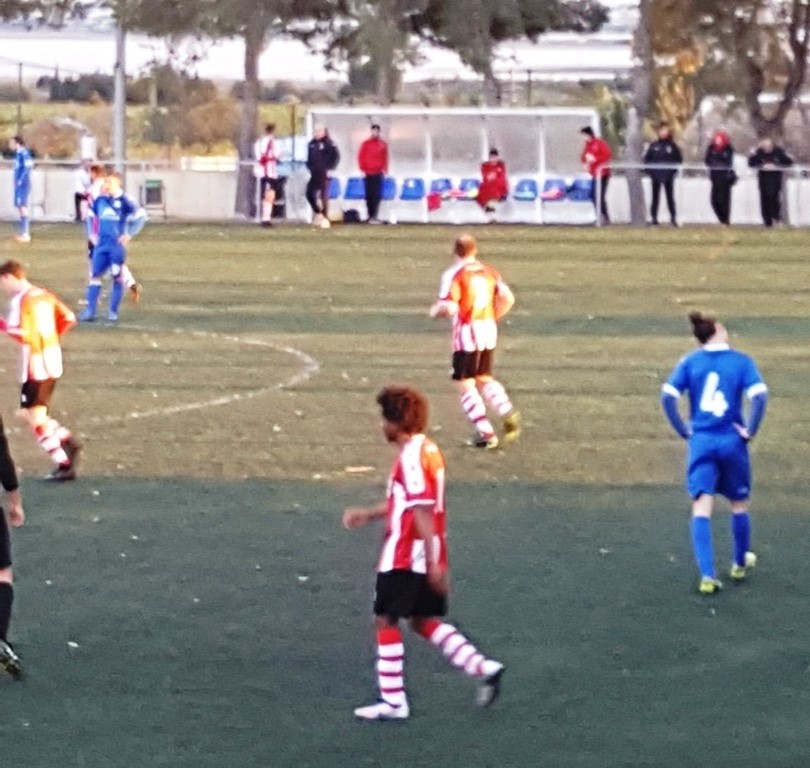 Ten minutes later the same player, Vazquinho, gets on the end of a through ball from Maccan, rounds the Bahia keeper and slots the ball into an empty net to double the Monte lead which they held until the half time whistle.

The Monte faithful expected the visitors to be swept away in the second half but nothing could have been further from the truth. Montesinos appeared to take their foot off the pedal and this allowed Bahia to push forward and once again, Dani in the Monte goal, had to be at his best. But 18 minutes into the second half Bahia deservedly pulled a goal back after sloppy defensive play from Monte. The crowd were now anxious as there team, who appeared to be in total control in the first 45 minutes, looked as if they had gone to sleep.

Keeper Dani had to once again be at his best to keep the visitors at bay before substitute Manuel Sanchez smashed home a third goal for Montesinos in the 75th minute of the game. Once again Bahia came back into the game and from a free-kick, managed to score a second goal to make it 3-2 with 7 minutes remaining.

But they say you cannot keep a good man down and in the 43rd minute of the game, Vazquinho makes it 4-2 with one of the cheekiest goals you will see at this level as he left not only the defender but also the goalkeeper on their backside, to net his 23rd league goal of the season.

The match sponsors, Peña FC DEPORTIVO GALICIA LONDON, elected the Montesinos goalkeeper DANI as their Man of the Match, ahead of hat-trick hero Vazquinho.

This win keeps CD Montesinos in third place and as the division´s top scorers with 62 goals from their 24 matches played.

Next week there are no matches at this level due to the Fiestas, so the next match for CD Montesinos will be on the weekend of the 24/25th of March with an away game against Torrevieja CF. Match details are not yet available but will be published ASAP