A local man has been arrested after the Irish Aquablue Sport cycling team bus was completely destroyed by fire on Wednesday night whilst parked up in Almeria following Stage 11 of the popular race.

The man, who is said to have 62 previous arrests, 49 of them at the hands of the National Police and the rest by agents of the Civil Guard has been identified as PVR, 55 and resident of Barrio Alto in the city. Virtually all of his previous arrests have been related to acts of arson.

During the early hours of Thursday morning he is said to have placed a mattress underneath the Ireland-based team’s bus, doused it in fuel and set it alight. Fortunately there was no-one on the bust at the time. 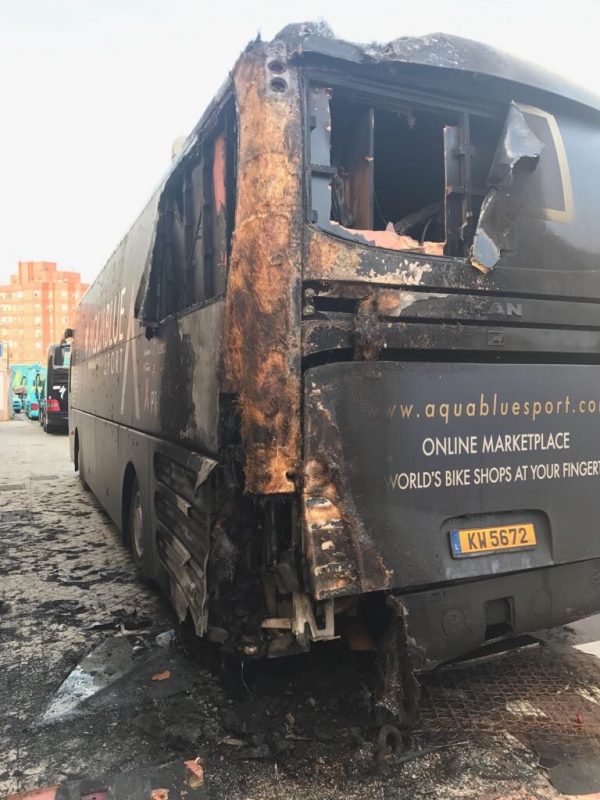 Aqua Blue Sport, founded this year by the Cork-born millionaire Rick Delanry, were sitting in last place in the team classification before Thursday’s stage but they have vowed to continue racing.

The team are competing in their first major tour. They have vowed to continue racing and posted a picture of their riders on a different bus on their way to stage 12, which began in Motril earlier Thursday, with the message: “Nothing is going to stop us starting today’s La Vuelta stage. Thank you for all the support.”