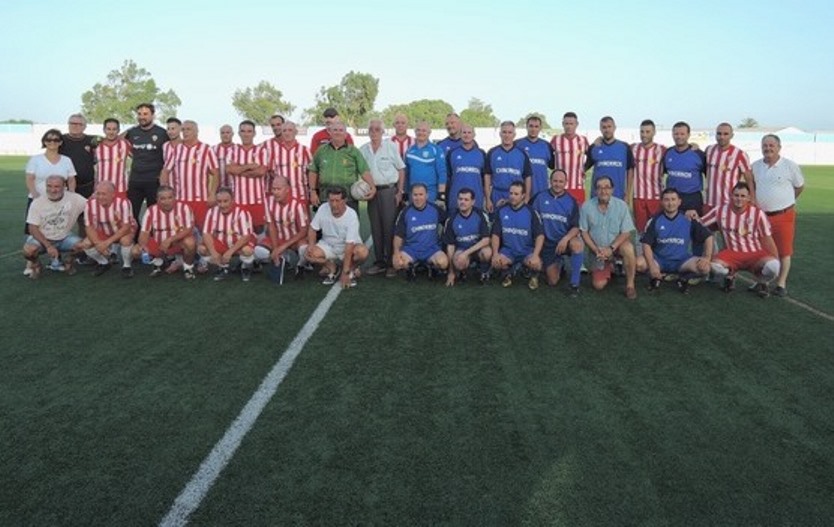 One ‘must see’ event that has taken place during Mojácar’s Patron Saint Fiesta for the last 40 years is the fun, but always exciting football match between the veteran “Pedruscos” and the younger “Chinorros”. It’s always a game with friendly rivalry and the usual side line banter, which is debated heatedly for the rest of the year amongst the local spectators, especially the men!

The match sees the return of many players who started their football journey locally, including past captains and honorary presidents sitting on the bench.
Founders of this initiative, Pedro “El Parral” (President of the Pedruscos) and José María “Churrio” (President of the Chinorros), were charged with presenting, on behalf of both teams, a plaque of honour to Diego Soler “El Pichino” for his loyalty as an ever present player, despite his veteran status.

Although the veterans have to be at least 40 years old, there are a pool of ready participants and, from the smallest Mojaquero sportsmen, they are vying for one team or another, pulled from the batch of promising youngsters or picked for their surprising senior talent by the “wizard” veteran captain, Antonio “Gigi”.

Whatever the case, there is always plenty of lively backchat between fans, spectators and the bench, often about the veteran referee “who does not run”, according to the Captains and the prowess of the different age groups.  The controversy is, of course, all part and parcel of the game and, as José María “Churrio” added, “in Mojácar there are two passions and they are ‘football and drama”.

Despite last-minute surprises in the lineups, the rivals were fairly evenly matched, ending with a final score of 5:3 and Pedruscos as the winning team. As customary, Mojácar Council via its Sports Department provided plenty of refreshments to revive energy levels, for which both teams gave their thanks.

Ana García, Sports Councillor, along with her fellow Councillors made sure they were there also, to cheer them on and join in with this very special, emotive event.