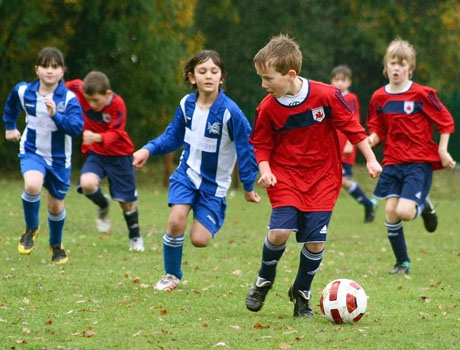 Daya started like an express train and a bad bad miss in front of an open goal in the first minute had to be seen to be believed !  On seven minutes Hector broke out of defence, took the ball the length of the field beating off challenge after challenge, his great cross was met superbly by Franki who fired home the opening goal for the visitors.

This goal seemed to wake up the home side and they came more into the game but it was Daya who still carried the greater threat.  As you would expect from this most local of local derbies, it was a very physical game with two yellow cards in the first twenty minutes and surely more to follow.

Another bad miss by Daya on thirty seven minutes and you began to wonder if they would find the back of the net again this evening !  Just two minutes later the visitors missed yet another easy chance with an open goal at their mercy.  Just before half time Almoradi were down to ten men following yet another very poor challenge.  So 1-0 at the break but Daya should have been out of sight by now.

The second half was just thirty seconds old and with his first touch Braulio, on as a sub, put Daya firmly in the driving seat with a well taken goal.  So,2-0 down and with only ten men it was hard to see Almoradi getting anything from this game.  On sixty five minutes another good chance for Daya just went wide of the post following a diving header.  There was very little coming from Almoradi now and a third goal looked on the cards for the visitors.

The third goal for Daya came on seventy five minutes, following some good build up play Isaac slotted the ball home for game, set and match for Daya.  Braulio made it 4-0 just four minutes later and the Almoradi team were now totally demoralized.  Daya’s fifth goal was well off side, but Isaac played to the whistle and put the ball in the net on eighty two minutes.

Goal number six was a screamer from Francisco on eighty five minutes but I am afraid Almoradi had almost stopped competing by now.  So large bragging rights for Daya this weekend against their number one arch enemies who were totally outplayed.  It was Daya’s biggest win of the season but for some poor finishing it could have been double figures.  Final card count, eight yellows and one red.