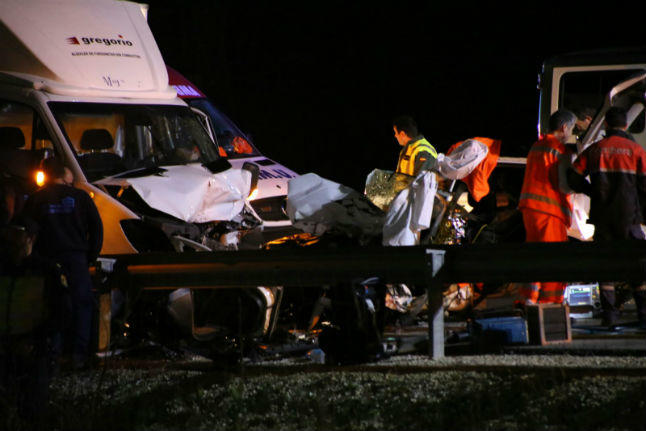 One person was killed and four others, including a baby, were seriously injured in a car crash that took place on Tuesday evening in the Orihuela village of La Matanza.

The accident, involving a van and a car in which the driver died, took place on the CV 867 at the southern end of the village on a section of the road that was only built eight years ago. Unfortunately, despite an abundance of street lighting none of the lampposts were lit up although it is not known if this contributed to the accident.

According to the Emergency Information and Coordination Center the accident occurred at about 7.30pm.

According to sources the accident was a head on collision on a long, straight section of road. where overtaking is allowed. One of the vehicles involved was a Volkswagen Golf, the driver of which was killed. It is understood that the passengers were his wife and child, all residents of Murcia. There were two other people travelling in the van, which was owned by a rental company.

Such was the impact of the crash that firefighters from Orihuela, Almoradi and Crevillente, took until about 10pm to cut out the individuals from the car. All the time the road was closed in both directions.

Everyone involved in the crash was taken to the Hospital Vega Baja, in San Bartolomé. This is the most serious accident occurred in the region of Vega Baja so far this year.