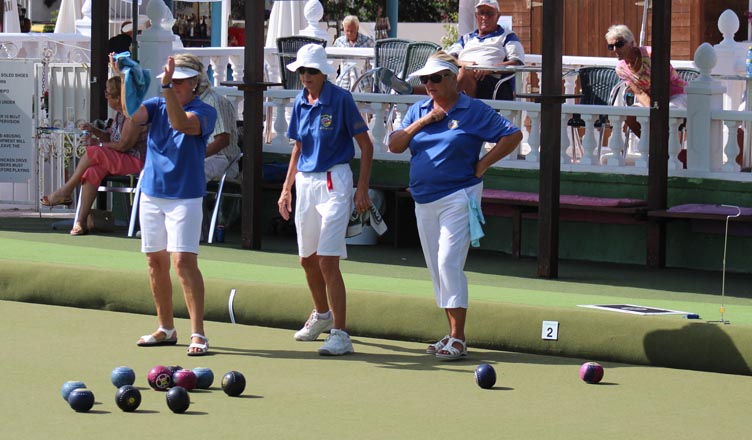 Monday proved to be a splendid start to the week for The Pintos, as well as the excellent company as always at La Marina, we came away with 3 rinks and a draw against The Pathfinders. The overall shots being taken by The Pathfinders by a very small margin, a good result away from home for The Pintos.

On friday The Raiders had a bye and The Mustangs were at home to Country Bowls Geckos. The Mustangs took full advantage of the home mat and with their very good play won all the points including a good overall shot difference, hopefully we can retain some of the advantage when we visit The Geckos at Country Bowls. But a job well done by all today!

The Neptunes travelled to play San Miguel Comets where they secured a 7-7 draw. The home team took the rinks 3.5 to 2.5 but the aggregate was taken by the Neptunes 99-98.

At home in the afternoon the Moonrakers were beaten by Quesada Diamonds 12-2 with the aggregate 111-85. The Saturns had a bye

Wednesday in the winter league the Emerald Isle took on La Siesta away and came away with an impressive 12-0 victory, the aggregate being 115-57 which takes them to top of the table.

The Claymores played at home in morning against San Miguel Comets and slipped to a 8-6 home defeat, 3-3 on rinks, but aggregate going to the away team by 113-109

A disappointing start to the 2016-17 Premier 20 competition with a 13-3 loss to Javea Green with only our triples teams picking up points. Joy& Brian Gardiner with Jean Cooper managing a creditable draw 18 shots apiece whilst Wendy Ralph, Jim Hudson and John Ball won by 24-22.

The Apollos returned to winning ways with a 9-5 victory against Montemar and by a points score of 116 -95.Top team was Joy Gardiner with Bill & Sue Jordan winning 32-9 having been behind early in the match whilst similarly Dawn & John Taylor with Harold Charleton behind until the 6th end came through with a 27-16 win. Ann and Robert Heath with John Ball picked up 4 shots on the last 3 ends to gain a creditable draw.

Mixed fortunes for the Pioneers who lost to Mazarron by 130 -79 but picked up 6 points thanks to 3 winning rinks. The best result being from Fred Charman, Tom Heaslewood and John Lincoln with a 16-14victory.Two further rinks managed single shot narrow victories.

Not such good news in the Winter League this week after last week’s superb performance. Our opponents Emerald Isle were just too good and won on all rinks thereby taking all points. Well done to them and they must have a fine chance of winning the League this season.

The Blues travelled to La Marina to play the Seagulls and came away with a 10-4 defeat.

A win for the Golds with a 12-2 win against the Emerald Isle Roundheads with the shots being 121 to 85. Top rink was Penny Porter, Rod Edgerton and John Clarke with a 28-5 victory this was well supported with 4 other winning rinks. Well done to Rab Logan, playing his first game as skip, with Fred and Janet Charman winning 21-10 and to Ann Edgerton playing her first league game in 2 years winning with Roy Millward and John Porter15-13.

Finally, sad news to report as Alistair who ran the Wednesday Chicken & Egg has passed away recently R.I.P.

A good performance by the Toreadors against top of the table Apolios but not good enough. The Toreadors lost a close match points 9 – 5 and by 116 – 95 shots. Well done to our winning rinks of Sheila Roberts, Howie Williams and Skip Ron Jones, Cliff Norris, Pauline Woodfine and Skip Barrie Woodfine, and the drawing rink of Rita Towle, Chris Harding and Skip Joan Harding.

Wednesday November 16th. Today we played the top of the table Javea Green. Some very good bowling from both sides. A very good result for Monte Mar drawing 6 – 6 and also our Berleen winning again. Well done to you all!!!

All bowlers are welcome to join the chicken drives on Wednesday & Sunday afternoons or Saturday morning; for more information please check the club website: www.sanluisbowls.byethost7.com

WASPS on Wednesday afternoons, be there for 1.30, 5 euros for woods, shoes, bowling and tuition if required.  No experience needed, come along and have a go!!

Winter league. What an improvement on the previous weeks result and much needed too! Away at Greenlands they cleared up with wins across the board which lifted the team moral.

Southern League A division Lanzadores entertained the Quesada Swallows but despite some very competitive bowling they managed to take four winning rinks from us, two of our teams did come good to win their games, B Regan, B Brown & B Dunn 22-9 and J Chaplin, SJ Broadhurst & I Kenyon 22-12. Shots, VB 95 (4) – 100 (10) Q.

Picadors were also at home playing the La Marina Sharks. They each won three games with the Sharks taking the long game.

Vistabella are offering new bowlers a free morning of bowling on a saturday morning with a hour of tuition.

All results & tables can be found on:-

Shots really counted on Monday. The Pathfinders had a very close game in the morning when they drew with El Rancho. John Morgan led Dave Bulfield and Angie Butler to a win. While Colin and Lynne Armitage plus Margaret Sadler managed a draw. So guess who led his rink to yet another win with great help from Dave McGraw and Lorita Rae. Yes, Baz Sadler.

Seven more shots gave the Explorers the two extra points in a 10 – 4 win over Monte Mar Matadors. Jim Manning, Jim Reeves and Margaret McLaughlin plus Dave Hadaway, Tom Spencer and Roger Stacey had good wins while Dave’s better half had a well fought win with the help of Phil Pape and Garth Slater. The same with Margaret Finlayson’s rink with Mike Smith and the versatile Maureen Kidd winning in a very tight game by one shot. Always looking for consistency in bowls, well we’ve got that but the wrong sort. We lost again in the Winter League 10 – 2 away at BBC this time. Colin and Lynne Armitage with the pair of Mike’s, Stone and Smith got our two points.

Must thank our reserve, Roger Stacey for travelling all that way to see us lose. Six shots overall separated us. The Sharks travelled to Vistabella to play the Picadors and came away with an 8-6 win.  Alan Castle, Phil Pape and Janet Parsons plus Roy Hart, Peter Parsons and Andy Bartlett plus Dave Lewis, Jim Manning and Margaret McLaughlin all won. The Seagulls had a great win over La Siesta Blues at home by 10 pts to 4. The four winning rinks all scored more than 20 shots.  Len Daniels, Steve Hindle and Steve Douglas 25-11, Jim Freeman, Dave Taylor, and Dave Bulfield 29-21, John Morgan, Mike Stone and Lynne Armitage 24-7 and Barry and Wendy Latham with Barbara Forshaw 25-4.

The Dolphins like the Winter League are the strong ones propping up the Div B.  Playing the Quesada Swifts they swiftly lost 11-3. Martin Butler, Mike Smith and Allan Wilcock won 25-6 while the other point came from Brian Duff, Cliff Rawlinson and Ray Gardiner.