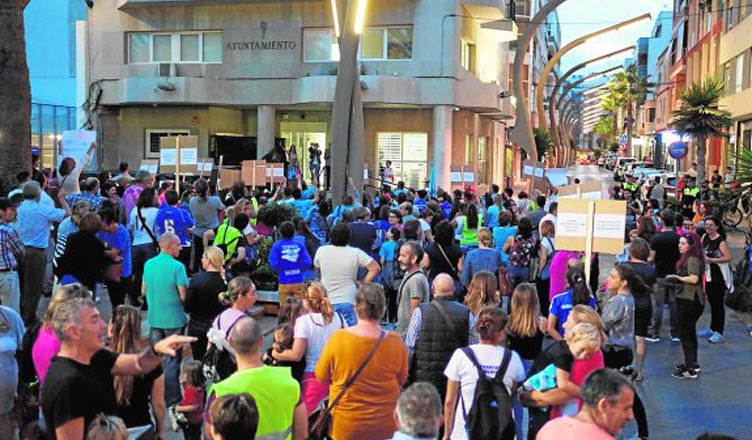 Hundreds of people protested outside Torrevieja Town Hall on Thursday, at the same time that the city’s politicians were holding their Plenary Meeting. They were chanting and standing behind a large banner carrying the slogan “Torrevieja united by sport,” as they demonstrated against the council proposal to put the management of Torrevieja’s Sports City into private hands.

The Platform ‘United for Sport’s Quality in Torrevieja’ has flatly rejected the council proposals demanding the continuity of the system that, until just a few months ago, has managed the municipal sports schools in a thoroughly professional manner.

Members of the platform, which also has the support of many teachers and students, read out a statement in which they stated that “we cannot trust a government that has lied,” recalling the council agreement that had previously said the organisation of sporting activities by municipal monitors would be extended.

The protesters said that passing the management of sports classes into private hands would see a deterioration in standards with the management company imposing quotas on each of the schools and with the City no longer have any responsibility or liability for the maintenance and upkeep of the town’s sports facilities.

Representatives of the group met on Tuesday with the mayor, José Manuel Dolon, and the Councillor for Sports, Victor Ferrández, and according to Pedro Antonio Perez, the platform spokesman, it seems as though the Council had already made up its mind to outsource the management of the city sports schools to a private company.

Perez said it meant “an unpleasant surprise”, recognizing that ” the City Council will have the final word and why it is so important that the maximum number of people to join the platform in the demonstrations that have been called.”

He stated that many people were even threatening to boycott the sports facilities but this was not the answer and such measures would only strengthen the government’s hand.

The platform also sent a message to the municipal government in which they stressed their refusal to sanction the disappearance of sport in schools, demanding that “the politicians don’t inflict any harm on such an important and sensitive area as the physical education of our children who are both our social fabric and the decision makers of the future.” At the end of the plenary session the mayor was escorted by security forces as he left the town hall.